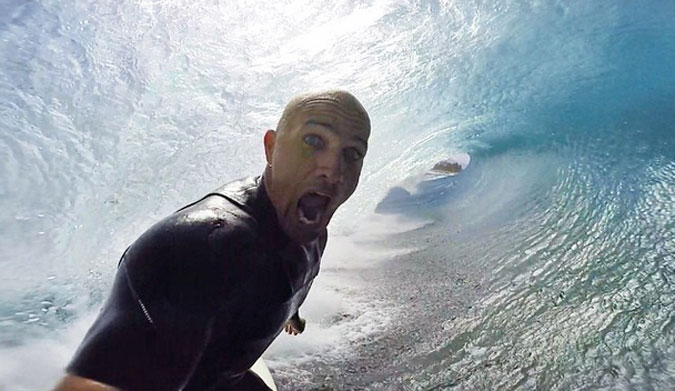 Kelly Slater has been setting himself to be as successful a business man as he is a surfer. In the last few years, he’s stuck his toes in the business pool on more than one occasion–from the now defunct VSTR brand and the ever-mysterious Kelly Slater Wave Co. to the more recent non-energy drink energy drink Purps and the non-surf brand surf brand Outerknown. And now rumor has it that he’s the majority stake holder in Firewire Surfboards.

Firewire has been a company that’s been on the forefront of trying out newer, more environmentally friendly materials in their surfboards, so it makes sense for Slater to align himself with them. The rumor is that the general idea behind the 11-time champ’s majority share purchase is to turn the company into one that deals only in eco-friendly boards. But there’s a kicker: the boards will be shaped by some of the world’s best shapers. Although the rumor-mill is churning, Slater has remained quiet about it. “I’ll address the surfboard stuff soon,” he told Stab. “It’s nothing definite until it’s finished and it’s a work in progress.”

It’s a funny thing, surfing. Most of us claim to be staunch stewards of Mother Nature while riding around on epoxy-coated death sticks. Slater, of course, has probably broken enough surfboards to fill a landfill, and it’s something that he realizes. “There’s a certain irony to all of our environmental talk and chemical walk,” he explained in the Stab interview. “That’s not to point fingers at anyone but myself. I just think it’s time to do something about my residue that’s built up. The industry focus has been on perfecting the shapes and performance of what we are all used to for a long while now. I’m fond of tinkering and experimenting and evolving. Lessening materials’ impact is an obligation for me. So… my partners and I are working on something.”

Firewire’s new TimberTek technology is actually pretty environmentally impressive, especially for a large company with a definite bottom line. While most large scale surfboard manufacturers–for cost reasons–aren’t able to entertain the idea of spending more on sustainable materials, Firewire is nutting up and making boards with sustainable wood deck skins and bio resin. While they’re still not going to turn into compost if you throw them in your garden, it’s big step in the right direction. And if it works (which it should, if surfers are as environmentally conscious as claim to be), then more and more surfboard manufacturers will hook their wagon to the green train.

Kelly Slater has long been a guy that people look to for the next big thing. When everyone was still glassing fins on, Slater was using removable fin systems. When everyone else was riding step ups in bigger waves, Kelly was stepping down. His involvement in moving one of the most successful surfboard companies into greener pastures may well herald a new movement into a place where surfing needs to be headed. And if Kelly Slater keeps moving in this direction, he’ll soon be quoting Jay-Z: “I’m not a businessman. I’m a business, man.”