Shaping The Future: Ashley Lloyd Thompson Is Moving Ahead 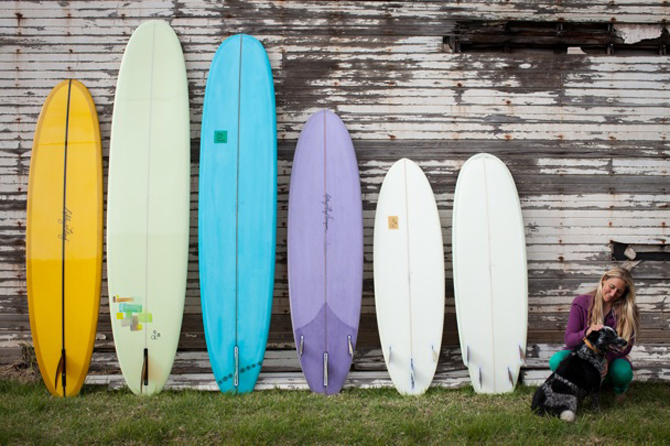 A quiver. And the future. Photo: O Magazine

Surfing is perhaps one of the most hypocritical endeavors us humans pursue. Most everything we do is a walking conundrum, such obvious deviations from our stated values, but often we are blind to them. We say that we are a people that love the environment, yet the very things we do to get in touch with the environment — from the things we use to harness the power of the water to our very method of traveling — are some of the most environmentally destructive things on earth. But it’s okay we tell ourselves, we are still a peaceful, open-minded people. And yet our magazines are plastered with sexist, ageist and sometimes even racist images. Self inspection only go so far. Until recently.

From the mouth of babes, it has taken a 13-year-old girl to show us the hypocrisy of our ways. That’s right; it’s taking the words of a child to ask the questions we refuse to acknowledge. Have we strayed so far from reality that oppression and objectification have been so internalized by the victims that they now see their objectification as an asset? Do we really wonder where the respect lies when the women’s side of the draw for the pro tour is still forced to compete in the worst conditions and the competitors are rarely referred anything other than “girls.” Or that over a handful of male big wave surfers have died pursuing their dreams, yet one woman breaks her ankle and the whole idea of women surfing big waves is called into question.

In an era where Alanna Blanchard and Anastasia Ashley are as famous and respected for their butts as they are for their off-the-lips comes Ashley Lloyd Thompson: surf instructor, shaper, artist, and incredibly soulful musician. Hailing from the cold kelp-infested waters of Santa Cruz, Ashley has carved out a unique niche for herself in our male-dominated world. Ashley is not only one of few women who shapes but, according to our research, she is the only woman who owns her own shaping business.

Ashley didn’t start out wanting to the bust any glass ceilings. Like most of us, growing up in Santa Barbara, her first dreams were to become a professional surfer. Along the way she began shaping, learning all aspects of the trade until she was recognized by Bing surfboards for her brilliance. While still creating signature models, Ashley has her own business where she helps make peoples visions into reality. Using a unique, personalized touch that involves a lot of interaction between the shaper and customer, Ashley creates a highly individualized board unlike any others you have seen. Part of her success is due to working with an equally talented team. In and out of the water, up on the stage or in the shaping room, this includes her husband and partner. We tried to catch up with Ashley in between her many different gigs of which she has now added motherhood to as well.

Surfers often talk of mentors, people who have helped them along the way. You have talked about your relationship with shapers Danny Tarampi and Steve Coletta; are there others outside of the surfing world that inspired you?

Yes, I’ve had several amazing artists in my life that have influenced me. My dad, Michael Lloyd, is an amazing fine artist. Most people think his paintings are photographs at first glance. I have always been inspired by the way he looks at the world and I think of him often when I shape a board. His eye is incredibly accurate, and his imagination endless. Painting, remodeling a home, gardening walking on his hands, fixing a car, making furniture, designing the backgrounds in Hollywood movies — I have always been in awe of what a renaissance man he is.

My best friend growing up, now known as Tula Pink, has also been an inspiration. Seemingly limitless in the art she creates, she now designs fabric and makes quilts that can tell a story if you look close enough. I admire the way she looks at things further than your common answer.

How did you go from riding a surfboard to wanting to shape one?

Danny asked me if I wanted to learn. I learned through his teachings and some friends in Santa Barbara who took me under their wings with bits of advice at a time. Once I had shaped my first board, I rode it. The process of learning how to shape still continues still today, and I’m sure always will.

There have been many changes in the industry of the last fifteen years. From computer shaping to the rise of the Asian mass produced market, how does an independent shaper like yourself compete with the myriad local, national and international competition?

I’m not quite sure… people order boards, and I shape them  I shape most of my boards for folks I meet in the water, but my customer base seems to be expanding further and further these days; little by little my network seems to be spreading. I am always very grateful when someone appreciates my boards and wants to place an order.

Can you tell us more about music and your creative process?

Sometimes people give me music that they like to listen to as I shape their board. This inspires me and helps me connect with the person, and also expands my musical tastes. I play music in a band called The Shapes, with my husband, Alex Thompson. We are both songwriters and are inspired by each other and a lot of elements.

Many surfers are also artists, is there something about the ocean that helps the creative process?