Ask Johnny Utah: ‘My Boyfriend Wants to Take a Surf Trip With His Ex’ 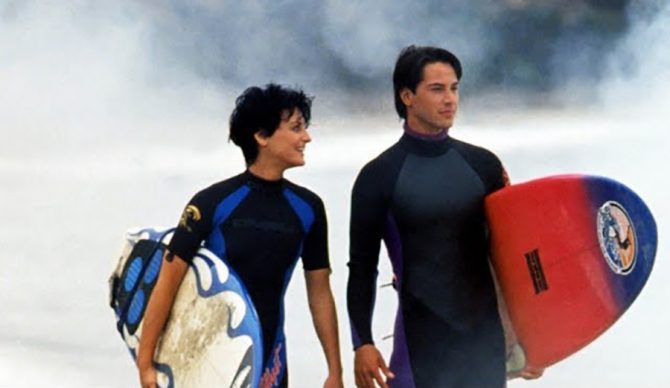 “A surf trip? With your ex? Oh, by the way, I asked Bodhi over for dinner tonight.” Photo: Screenshot

Editor’s Note: Believe it or not, The Inertia receives countless questions about relationships and shredding. So many, in fact, that we decided to commission longtime columnist Johnny Utah to answer them in a semi-monthly advice column, Ask Johnny Utah.

My boyfriend and I were recently discussing vacations we’d like to take. The two of us usually travel somewhere together or go visit family. But this time he had an idea that caught me off guard – a surf trip. With his ex-girlfriend. And only his ex-girlfriend.

I know he loves to surf and he’s mentioned before that he used to travel with his ex to different countries to catch waves. I’m not much of a surfer, but I do love to travel, so I was disappointed when I was not included in these plans.

He claims he really wants to go on a surf trip and it wouldn’t be much fun for me, since all they’d do is surf. He doesn’t have any other surfing friends and doesn’t want to travel to a different country alone, so he asked his ex-girlfriend if she wanted to come along. They would be traveling as friends and he assures me nothing romantic would happen.

I’m not excited at the prospect of my boyfriend of three years going somewhere on a trip with his ex. But since I don’t surf, maybe there’s something here I’m missing. I love my boyfriend and don’t want to hold him back from exploring the world while doing what he loves, but I’m not thrilled by his choice of company (and not being invited). Are my limitations as a surfer becoming limitations as a travel companion? Should this potential trip be something I am concerned about? Or is there a certain surfing something he platonically shares with his ex-girlfriend that I just don’t understand? – Conflicted in Carlsbad

On the one hand, your boyfriend could just really enjoy his ex’s company and find her to be the perfect surf companion. The ideal surf travel buddy can be harder to find than a significant other. A good shrubby (shred buddy) knows how to strike that perfect balance of keeping the trip focused on catching waves, while also squeezing in time to do a bit of the normal touristy exploits one expects from a vacation. Not everyone is suited for that.

On the other, they would be two scantily clad surfers alone together in an exotic location that share an extensive sexual history. WHAT COULD POSSIBLY GO WRONG? If you believe any of the platonic nonsense your boyfriend is peddling, then I’m a Nigerian prince that needs to get back home to my family. If you pay me $10,000 for a plane ticket home, I’ll reward you handsomely with gold and jewels. I’ll also need your social security number. It’s customary in my country to divulge such information before transferring treasure.

As an undercover FBI agent, lying and distorting the truth to stay alive comes with the territory. I know bullshit when I hear it – and this bull is overflowing with shit. You would be insane to sign off on this. Your boyfriend is not suggesting he go on some killer surf trip with a pal; he’s asking to go on a sexy rendezvous where he might surf a wave or two along the way.

Maybe suggest a counter offer. If he goes surfing with his ex, you would like to go to a romantic, all-inclusive resort with that hot guy Brad from your office. There’s nothing sexual about that. Nope. You and Brad both just enjoy drinking free champagne all day and winding down in a lavish suite with only one bed. No siree – not a romantic thought in sight! Just a couple of spa enthusiasts that want to spend a week together wearing virtually nothing all the time and platonically lying next to each other for eight to 10 hours a night. Personally, I know nothing gets me more in the mood for a nap than sipping champagne next to an attractive woman in a bikini. Yep. That’s it. Just a good, long nap.

You could go the whole “have a serious conversation” route with him and reevaluate the relationship, but the reality is that this really only ends one way – heartbreak. The fact that he’s floating this idea of seeing his ex at all is grounds for questioning the entire relationship. If he’s already talked about taking a vacation together with her, this is already much further along than you realize.

So, you know what, Conflicted? Let him go. If he wants to frolic around with that bimbo tramp ex of his, then tell him to have at it – then throw all of his belongings on the lawn, change the locks, cut nipple holes in all of his wetsuits, and let a family of rabid raccoons turn his car into their new permanent residence.

When he comes back, tell him you would never waste your time with a poo-stanced, barrel dodging, pop-out board riding kook like him. Then push him in front of an oncoming CostCo truck and say something sweet like, “Gotta watch out for those outside sets, brah.”

Then walk off into the sunset and enjoy your new life without this rotten ball of seaweed you call a boyfriend wrapped around your ankle.