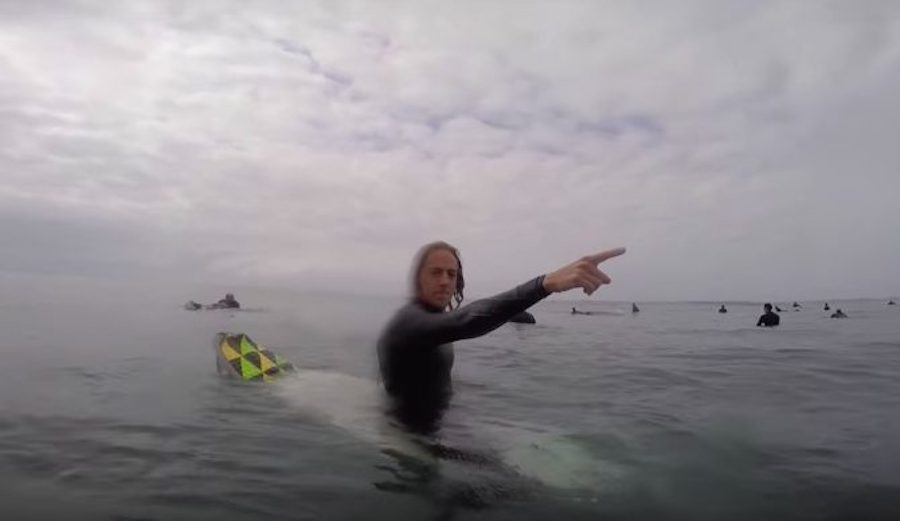 Michigan-born Aaron Hogan, 34, was fined for setting up an illegal tent at Lowers to claim “local status.”

A surfer who recently relocated to Southern California from Michigan was fined on Sunday after authorities discovered his illegal campsite at Lower Trestles. The man, Adam Hogan, 34, had been living at the site for a month as part of a scheme to “claim local status in the lineup.”

California State Parks rangers were tipped off to Hogan’s beachside tent when they received a phone call from another local surfer, Lucas Kirth. Kirth explained an encounter in the Lower Trestles lineup in which he took off on a wave Hogan was already on. Hogan paddled over to Kirth later telling him to go home and that Lowers was for “locals only.”

“The guy tried to flex ‘locals only’ with a midwest accent, so I was like, ‘Bro, where are you even from?'” Kirth told The Inertia. It was then that Hogan pointed to his tent on the beach.

“Right there, bro!” he yelled.

Hogan was none too pleased when authorities dismantled his tent and improvised campsite. He said that as a local taxpayer ultimately they should answer to him, not “corporate interests and Big Pharma.”

“Look, I just don’t think it’s fair what they’re doing, kicking a local off the beach like this,” Hogan told The Inertia. “I mean, the other locals here should be pissed. What happens if State Parks comes to their crib and kicks them out? It’s totally unfair.”

According to another Lowers local, in the month Hogan was “living” on the beach there were numerous occasions he would call himself a local, even though few people recognized him.

“When he first showed up, I remember him paddling up to a group of about ten of us that surf there every day saying, ‘It’s so fuckin’ crowded today. Not like the good old days when it was just locals like us,” said San Clemente resident, Ben Tyler. “I just remember staring at him like, ‘What?'”

One of the stranger items discovered by authorities that broke down Hogan’s campsite was a map of the local area with the homes of many local surfers circled and the distance of their homes to the wave scribbled next to them. Next to it, authorities found a list of names with the words “pecking order” scrawled across the top. Hogan’s own name was written in the number one slot followed by ten other surfers in the order of their proximity to the wave.

“I think this dude was just trying to take advantage of one of surfing’s most logical and fairest practices – regulating lineups based on your local cred,” said Ben Tyler. “I mean, I worked really hard to convince my parents to give me some money for a house out here so I could claim local status in the lineup. You can’t just pitch a tent and suddenly call yourself a local. It doesn’t work like that.”

Editor’s Note: Johnny Utah is an “Eff-Bee-Eye” agent and an expert in works of satire.