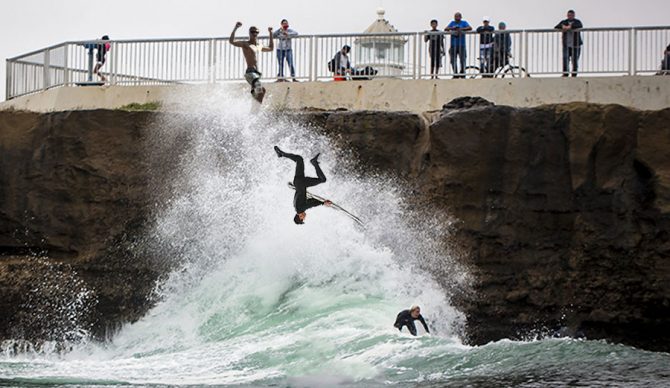 In November of 2018, Trip O’Fallerty of San Jose, California pressed charges for an incident that involved him and another man near the Santa Cruz Surf Museum in which he was pushed off the cliff above the popular surf spot, Steamer Lane, and into the water. The San Jose native wasn’t hurt but he pressed assault charges nonetheless with Santa Cruz PD. On Tuesday, a local judge threw out the case, citing what’s sure to set a precedent for “justifiable surf rage.”

“The man accused presented a morally and logically irrefutable defense,” the judge said Tuesday morning. “It turns out O’Fallerty was standing along the cliff and repeatedly called it ‘Steamers’ one too many times,” referring to the common misnomer given to Steamer Lane.

“That one really gets under my skin, too,” he added. “It’s STEAM-ER Lane or just ‘The Lane.’ Seriously makes my blood boil when people can’t get that one right. Plus it was high tide and he pushed him from a spot where people regularly jump straight into the lineup. There wasn’t sufficient enough danger for me to consider this assault.”

Eye witness accounts reported O’Fallerty was posing for a photo on the cliff’s edge, holding his surfboard. O’Fallerty’s supposed girlfriend, who took the picture, asked for him to clarify the location so she could tag him in her Instagram story. When he replied with “Steamers,” a man locals simply refer to by the nickname “Bunker” aggressively sent him off the ledge about 20-feet above the water.

While opponents of the decision argue throwing out charges will start a slippery slope and embolden people to partake in other acts of “surf rage,” others contest it will have the opposite effect.

“I think it’ll make all these valley kooks think twice about getting something as simple as a surf spot’s name right,” one Steamer Lane regular said. “Plus, stop bringing your girlfriend here to watch you surf. It’s really played out.”