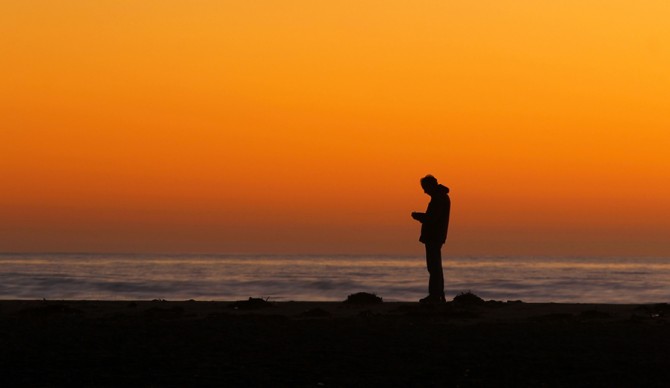 A Santa Cruz man has entered the Guinness Book of World Records for a surf-related feat that’s actually required him to not surf for the past 853 days. More specifically, 32-year-old Richard Stokehill has pulled his 2002 Toyota Tacoma into the parking lot at the westernmost end of 41st Avenue and the corner of East Cliff Drive to check the waves every day since October 13, 2016 and decided the conditions didn’t warrant attempting to catch waves.  Every. Single. Time.

“Still too much tide,” Stokehill said on the morning of February 13, 2019, now well over two years into his streak of consecutive surf-less days. “I was really frothing the night before the streak started. We usually have some reliable surf throughout the fall months here in Santa Cruz — Westside, Eastside, quick trips up to Año, Davenport — but that fall had been pretty slow and I was hurting for waves.”

On October 9, 2016, before the streak started, Stokehill noticed something on the buoy charts that looked promising, expecting solid surf by the morning of the 13th. He surfed mediocre, blown-out waves at nearby Pleasure Point on the 12th, saying that session was “really just a light warm-up sesh, just looking to get my legs loose and ready for the real waves that were coming.”

But when he arrived at The Hook on that fateful Wednesday morning — the wave he frequents the most — he wasn’t impressed.

“It was legit nuking that morning,” longtime Eastside local Jeff Manners recalls. “I ran right by Rich at the stairs at 41st around 6:45 a.m. or so. He was drinking a coffee, surveying the lineup, I threw him a ‘howzit’ and he’s just all, ‘Too much tide.’ I got out of the water three hours later and he was still there.”

With more waves in the forecast, Stokehill came back to The Hook the following morning at six a.m. Manners is quoted as saying day two of that combo swell was “still super mental,” but again, Stokehill stayed perched atop the cliff.

“I thought it would be all-time that morning too but there was just this weird sideshore thing going on with the winds and that was really messing with the texture. Wasn’t feeling it,” he says.

According to surfers who frequent the 41st Avenue wave, Stokehill has now been seen sitting in the same spot next to the stairs overlooking The Hook by six a.m. every day since, yet he’s never actually gotten in the water. That streak has now earned him an official world record. Stokehill says he’d like to extend his streak to 1,000 days and then he’ll consider taking a day off from just sitting on the cliff to potentially surf.

“Some days are really tough, especially during the winter,” he says. “I’ll show up at six and everybody’s just psyching on it and that makes it really tempting to take a day off. But then I’ll look at it and remind myself like, no, it needs more tide, or maybe it’s a tad wompy and there needs to be a little less water. Or some days, you know, the swell angle or wind just isn’t right. That happens a lot. Other days I can’t stand the thought of putting on a wetsuit when I’m shivering so much. And so I’ll just tell the boys ‘I’m over it.'”

It’s estimated Stokehill has consumed more than 2,000 cups of 7-Eleven coffee and worn out 13 beanies throughout his streak.

“I’ve saved a ton of money on wax,” he tells The Inertia.

Editor’s Note: Johnny Utah is an “Eff-Bee-Eye” agent and an expert in works of satire.