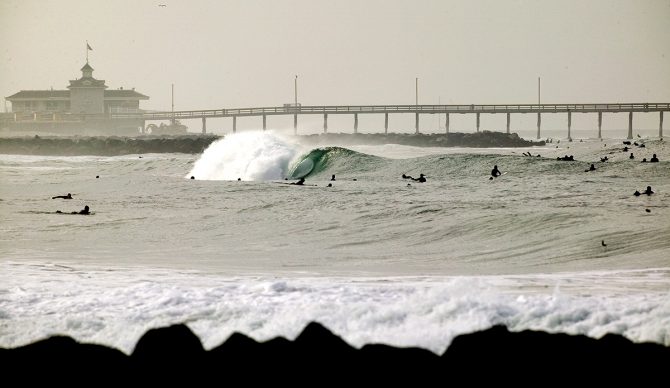 “You should’ve been here yesterday,” Tanner O’Dowd says between sets, floating in the midst of a popular Southern California lineup. “Place was nuking.”

The waves are currently a foot or two overhead and rolling through the point O’Dowd is surfing with machine-like precision. The lineup is sparse enough at the moment that nobody within the small pack of surfers is going without their fair share, but for some reason, O’Dowd is visibly and vocally less than content with the current offerings. He’s one of more than 1,500 surfers that recently took part in an exhaustive quantitative study conducted in the parking lots of half a dozen surf spots in Orange County. And as it turns out, the 31-year old’s declaration isn’t just a platitude; it’s scientific fact, according to the findings of the research he volunteered for. Over the course of the summer, self-reported surveys were filled out and interviews were conducted by a team of researchers at Surfer for Sociology, a new non-profit that examines surfing’s influence on individuals.

“When we set out to do this research, we were very curious what social circumstances and structures exist in the sport that causes surfers to always have this mindset that it was ‘better yesterday,'” explains Jonah Anderson, a founding member of SFS. “Honestly, we were a little shocked that our data actually backs what previously seemed like no more than an offhanded cliché. Swell after swell, day by day, time and time again, the waves have been in fact, better yesterday.”

During the study, interview subjects were approached in parking lots after finishing a session as well as in lineups. If they had surfed the day before as well, researchers then asked if they could conduct a brief survey comparing that day’s conditions with the previous day’s. Of the more than 1,500 surfers, many were interviewed as many as eight times in the three-month study period, resulting in a total sample of 6,783 responses. The answers were open forum and not multiple choice, which is where SFS researchers noticed something that piqued their interest: only three responses were ever recorded.

“These people literally could have said anything,” Anderson said. “Of every possible combination of words available to them in the English language — we didn’t offer them suggested responses or multiple choice or anything, just approached with a ‘Hey, howzit’ and a ‘How was it out there’ and every single surfer tossed out the same three answers.”

“It was better yesterday,” comprised an astonishing 87 percent of responses over the three-month period.

“Shoulda been here an hour ago,” made up nine percent of responses in both lineups and parking lots, with a majority of this response coming in between sets in the lineup.

“Yeah, pretty fun,” made up the other four percent of responses and zero miscellaneous responses were recorded within the 6,783 data points.

One member of the research team found this evidence particularly disturbing. Janice Sherman posed a relevant question midway through the summer when it was becoming evident that SFS was in the midst of uncovering something revelatory. Did this predict a possible surfing doomsday? A theoretical day when all surfers simply stop enjoying riding waves? She suggested the group start to dig a little deeper, introducing a transitive property of surfing hypothesis. If the waves were consistently better yesterday then one might predict they will be better today than tomorrow, and so on and so on until the waves are genuinely just…”Complete sh**.”

“The subjective observations of wave quality were consistently moving in a downward motion once we placed them on a line graph, regardless of other indicators of size and conditions,” Sherman points out. “There was not a single day where data suggested the waves were actually getting better or that anybody was enjoying them more than they had the day before.”

With further studying, the researchers confirmed that this theoretical transitive property of surfing doesn’t hold up.

“It’s an odd phenomenon,” Anderson says. “We thought Janice was really onto something once we sank our teeth in. It’s as if ‘yesterday’ exists in this abyss of recounting surf conditions. Yesterday is just like, an idea, man. Regardless of how good it is or isn’t today, yesterday will always be better. And when you wake up tomorrow, today then becomes yesterday, which then effectively makes today’s (yesterday’s) waves better than tomorrow’s (today’s).”

Anderson says the findings of this summer’s study have inspired them to take on another exhaustive quantitative study this fall in which they’ll enter lineups to test whether or not waves are actually better “further up the point.”