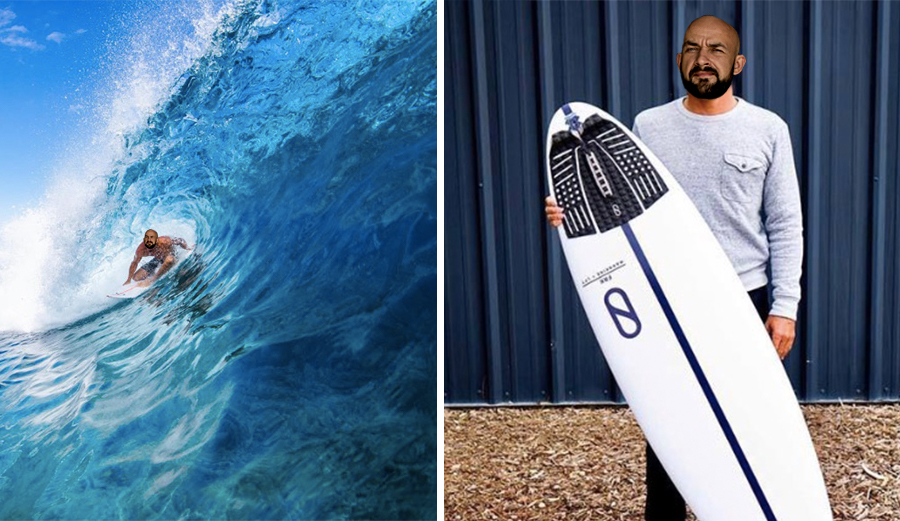 A surfer from the Central California town of Cayucos is bewildering friends and family after miraculously upping his surf game to Kelly Slater-levels and attributing it entirely to a new board purchase.

Heath Lightfoot, 39, has been a surfing devotee all his life having even spent a year in his twenties living in Bali.

“Despite riding my first wave when I was three years old and surfing consistently ever since, come age 20 or so I feel like I hit the peak of my performance curve,” Lightfoot told me. “Don’t get me wrong, I love head-high tubes and can pull a small air reverse every once in a while when the wave calls for it, but for all the hours I’ve spent in the water I feel like my ability has basically stayed the same for the last nineteen years.”

That all changed in July when Lightfoot ordered a new surfboard. After scrolling through Instagram on his lunch break one day, he came across a picture Kelly Slater had posted of a new board acquisition – a new Slater Designs FRK Slater planned to take with him to the WSL event at Jeffrey’s Bay.

“Typically, I would never order a board that short, but something in me said ‘Fuck it.’ I placed an order that night and got the board a few weeks later. It changed my life,” said Lightfoot.

According to friends and other local surfers, Lightfoot’s approach suddenly resembles that of the 11-time world champion in some very strange ways.

“Heath was a goofy-footer all his life and suddenly he gets this board and starts surfing regular-footed. It’s the damndest thing,” said Lightfoot’s longtime friend Calvin Backstrom.

“If I didn’t know any better I’d say he’s shrunk an inch in the last few months, too,” Backstrom continued. “The dude even started shaving his head and eats chia seeds for breakfast, lunch, and dinner. I don’t know what the hell happened to him.”

For his part, Lightfoot says the board purchase has breathed new life into his surfing and he’s taken it to Hawaii, Indo, and beyond.

“I’m not really keen to give away my secret, but it seems like the pros are riding what they’re riding for a reason,” he said. “And if you ride exactly what they do, well, maybe you’ll surf exactly how they do.”