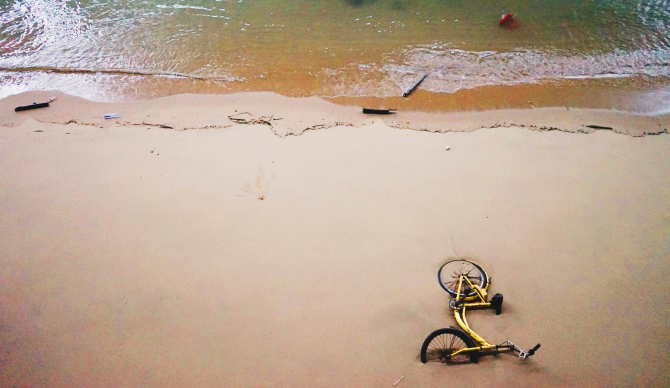 Rich Choi realized about a 150 meters too late: He would have made it down the trail that passes under California’s Interstate 5, through the preserve, across the tracks, and finally onto the sand at San Onofre faster if he’d just walked. But that’s not why man invented the bicycle. No, the bicycle was invented to transport humans more efficiently than putting one foot in front of the other like cavemen.

Ironically, now on the beach, Richard was being treated as if he was the first human being to ever steer a bicycle as onlookers stopped him every 10 yards to take pictures, asking questions about this beautiful relic with a surfboard rack on its side. It looked just like your run-of-the-mill e-bike everybody else commuted around Southern California on. Only this contraption clearly wasn’t powered by anything other than Richard’s own two legs.

“I bid on one of those abandoned storage units that had tons of really cool, really old stuff,” he said. “I found an iPod, some Blue Rays — just a bunch of outdated things,” he says with wonder. “Then I dusted this bad boy off. I thought I’d scored an e-bike. And then I noticed it was just the frame of an e-bike with no battery or engine attached or anything. So I started researching.”

Richard soon learned that this outdated e-bike was actually its ancient, now-obsolete precursor: the bicycle. He’d stumbled onto a real-life antique, a relic of surfing’s fabled history. One he’d heard older San Clemente locals talk about but never seen himself. Like empty lineups, the non-electric seemed like a thing of the past. Romanticized. And yet here he was, riding one on the commute to Trestles — a single cyclist in a sea of e-bikes.

“People do freak out when they see me on this thing,” Richard says. “They ask how it works and I show them. I just pedal. And they go crazy!”

Richard’s vintage find has become the talk of the town lately. The kids think it’s cool and their parents point and share stories of how they too used to ride non-electric bikes to the beach. E-bikes became so popular so quickly that their predecessor was obsolete in surf towns within a matter of months. But now they’re cool again. They’re retro. And the non-electric bike revival just may be here.