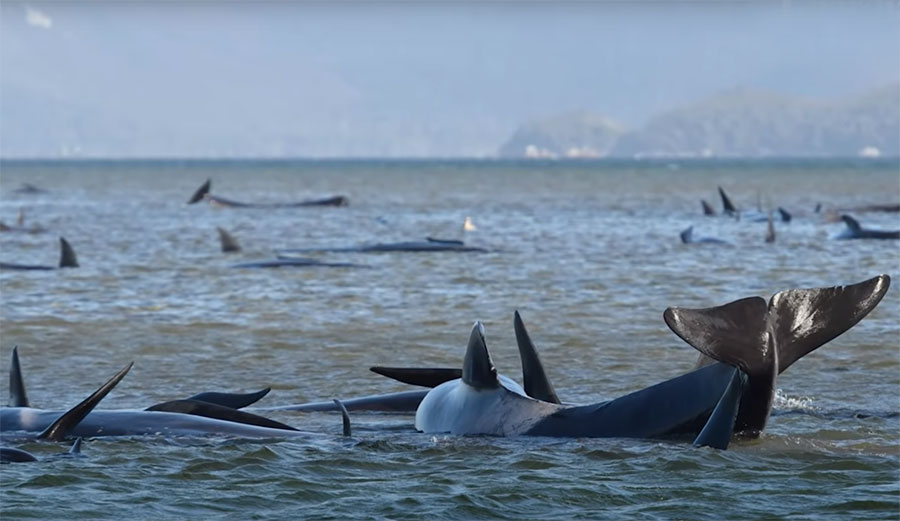 The whales were found in the Macquarie Harbor area of Tasmania. Photo: Screenshot/The Guardian

Macquarie Harbor, which sits on the west coast of Tasmania, is officially the site of the largest whale stranding event in Australia’s history. This week, 480 pilot whales beached themselves for unknown reasons. As of this reporting, 380 have died, but volunteers and conservationists have managed to return at least a few back into the ocean. Only some of the whales still on the beach are expected to survive.

Veterinarians who showed up at the scene had to make the call to euthanize some of the whales that had been on the sand since Monday and had no hope of survival. According to the BBC, rescuers had managed to save 50 by late Wednesday, and they were trying to help the remaining estimated 30 whales. Tasmanian officials have vowed to keep on working. “While they’re still alive and in water, there’s still hope for them,” said Nic Deka, regional manager for Tasmania’s Parks and Wildlife Service, “but as time goes on they do become more fatigued.”

Now, the focus has shifted to removing the carcasses, which are strewn along the coastline. Most of them washed up on the sand spits that litter the Macquarie Heads area on Sunday or Monday, and rescuers first counted 270 animals. The next day, however, a helicopter found an estimated 200 more nearby. Pilot whales can grow to as long as 22-feet, and they generally swim in groups of 20 to 150 individuals. Officials believe that the second group was not part of the same pod as the first.

For reasons unknown, a little over 80 percent of all of Australia’s whale strandings occur in Tasmania, and a large percentage of those happen at Macquarie Heads. Back in 1935, 294 pilot whales beached themselves, which was the record until now. More recently, in 2009, about 200 stranded themselves. IFLScience reports that the global record is held by New Zealand where 1,000 pilot whales became stranded back in 1918.

Crews are still working around the clock to keep the remaining whales alive, using slings to pull them off the sandbanks, allowing them to fully immerse themselves again. Once they’re free of the sand, they’re guided back to deeper water, where rescuers hope they will remain. So far, 50 pilot whales have been escorted back out to sea. There were, however, a few that were dragged back to shore by the tide. “Geographically it’s quite a challenging area,” Tom Mountney, a fisherman helping with the rescue operation, told BBC World Service radio. “It’s sort of inside an actual harbor so we’ve got several boats and hundreds of people on the ground preparing the whales in slings.”

According to Mountney, the whales appear to know, at least on some level, that the rescuers are attempting to help them. “They are remarkably calm,” he continued. “Some of them obviously, being a several ton animal, are quite strong so there’s inherent danger in dealing with them. But it’s as if there’s a bit of a sense of them knowing what we’re trying to do.”

The reasons behind why these mass strandings occur are unclear, but researchers believe that anything from food shortages to a lost leader leading the group astray or even sonar testing may play a role.