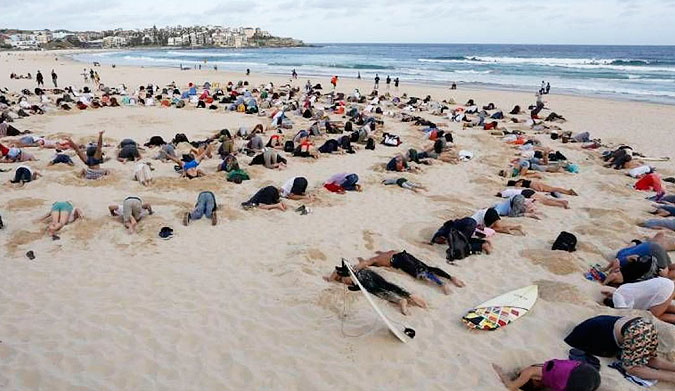 Many believe that Tony Abbott has his head in the sand when it comes to climate change. Photo: Mic.com

More than 400 protesters showed up to protest the Australian government’s choice to overlook climate change issues at the G-20 summit – the first one in years to ignore the issue. Their protest of choice? All 400 protesters buried their heads in the sand at Sydney’s Bondi Beach.

The second “head in the sand” protest held in Australia this year, the demonstration came after Prime Minister Tony Abbott said he wanted the summit to focus more on economic growth. The first protest was held back in September in Queensland, and included 80 people.

“I’m hoping the Bondi event will send a huge message to our government,” said George Hirst, the first protest organizer. “The G-20 can no longer hide their heads in the sand over the climate change planetary emergency.”

Abbott has long been the center of climate change debate, even going so far as to call it “absolute crap” in 2009. As one of the world’s biggest polluters per capita, Australia is the world’s largest coal exporter. Just last month, the European Union agreed to reduce carbon emission by 40% of 1990 levels by 2030, but Abbott’s staunch refusal to consider climate change as an effect of human industry has much of the rest of the world angry. At the Asia-Pacific Economic Co-operation (or APEC) summit in Beijing on Wednesday, the US and China  – two of the largest polluters in the world – agreed to take serious action to put a damper on climate change. The US will cut emissions by 26% by 2025, while China’s emissions will peak by 2030, then begin decreasing.

Australia, on the other hand, is looking a little weak in comparison. They’ve pledged to cut the levels of their 2000 greenhouse emissions by 5% by 2020, and many are skeptical that the government will hit that mark. In July, Australia became the only country to actually reverse action on climate change when they repealed a greenhouse gas emission tax.

“Obama’s on board, Xi Jinping’s on board, everyone’s on board except one man,” a protester yelled. “Tony Abbott!”