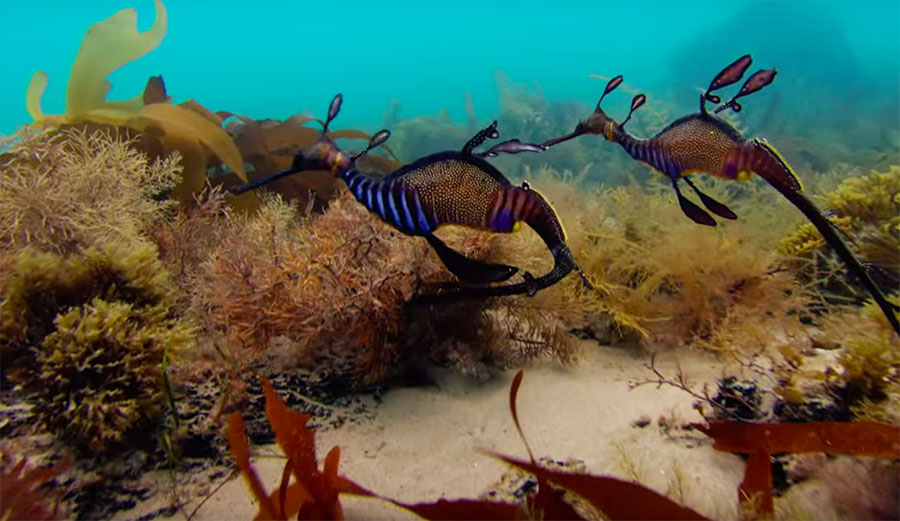 Love is in the air/water.

Valentine’s Day is upon us and love is in the air. And also in the water. Take a break from the Hallmark and chocolate madness of it all and find out what’s happening under the sea. Here are six of the weirdest mating and reproductive strategies of marine organisms.

1. Angler Fish.
As intimidating as they make look, female anglerfish only grow to be about 10 cm in length, while male anglerfish are about a tenth of that. The male anglerfish’s sole purpose in life is to find a female. Once he does, he bites into her skin and their tissue and blood cells fuse together. Eventually, all of the male’s internal organs disintegrate, leaving behind only his testes. The female is now free to reproduce at any time. Talk about mating for life!

2. Sea Horses.
Sea horses are beautiful, graceful creatures that often court for several days. During that time, they undergo a beautiful dance in which they swim side-by-side and mirror each other’s movements. Sea horses are unique in that males carry the babies. How’s that for swapping gender roles? Males have a pouch on the side of their body into which the female will inject up to 1,500 eggs. The male will carry the eggs for a few weeks and then the baby seahorses will emerge, fully developed.

3. Puffer Fish.
Male puffer fish are hard workers. In order to attract a mate, these 12 cm long fish flap their fins along the seafloor, making intricate circular patterns typically about 7 ft in diameter. These “mystery crop circles,” as they are called, are beautiful and look like abstract masterpieces on the ocean floor. Once the circles are finished, females will come to inspect them. If they approve, they will mate with the male and lay their eggs in the circle.

4. Gentoo Penguins.
Most women dream of the day when a man gives her a big rock. Gentoo penguins are no different. Males search through piles and piles of stones to find the smoothest and most beautiful stone they can. When they find the one that is just perfect, they present it to the female of their choice. If she deems it up to par, she will place the stone in her nest and prepare to begin her family.

5. Flatworms.
This one’s weird. Real weird. Flatworms are hermaphrodites, meaning they have both male and female reproductive organs. It gets weirder. In order to reproduce, flatworms undergo a bizarre ritual that has earned the title, “penis fencing.” It’s exactly what it sounds like. They duel it out, penis versus penis, attempting to stab each and avoid being stabbed by their future mate. The loser takes on the role of the female. Once a flatworm stabs the other with its penis, it injects its sperm into its opponent (and mate!) and fertilizes her/his eggs. Flatworms can also reproduce asexually, but rarely do, because penis fencing is obviously better.