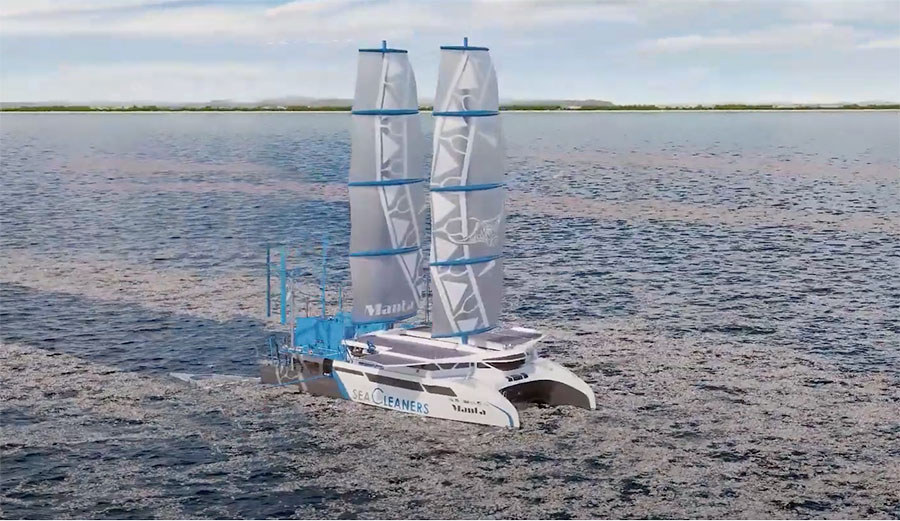 The Manta could be the future of oceanic garbage collection. Image: The SeaCleaners

Plastic pollution is one of the biggest problems in our oceans today. We’re inundated with it, and we’re puking out more and more every day. But just over the horizon is a trash collection vessel straight out of the future. The Manta is a garbage collecting sailboat that aims to tackle the plastic in the ocean in an extraordinary way.

It’s strange to think that all those little bits of plastic that surround our day-to-day lives will be around for hundreds and hundreds of years. Right now, for instance, I have a pack of gum in front of me. It’s made of plastic. Long after we’re dead, far longer than we’ll be alive for, that pack of gum will still be out there somewhere. My computer, my phone case, my diving fins, speargun, cell-phone charger, printer, the Bic pens in my desk, the spiral on my notebook. It’ll all be around for a mind-bogglingly amount of time. And that’s just what I can see from where I’m sitting. The rest of my house is full of it, too, as is yours. It’s impossible to escape, and it will all last for a very, very long time. Every piece of plastic that you’ve ever held, in fact, is likely still out there somewhere in one form or another. Scary, isn’t it?

See, on average, plastics take 450 years to decompose in the ocean. Even then, though, they don’t totally disintegrate. Instead, they simply break down into smaller and smaller pieces until they’re too small to be seen with the naked eye. That plastic is called nano-waste, and it’s absorbed by the tiniest creatures in the sea. Those creatures are the very beginnings of the food chain. And although we’re not at the top of the food chain — not technically, at least — we’re very much a part of it.

According to Ocean Conservancy, every year, eight-million metric tons of plastic enter our ocean. To put it into perspective, that’s about the same as one NYC garbage truck full of plastic dumping its load into the ocean every minute of every day for 365 days. That’s on top of the estimated 150 million metric tons that currently circulate our marine environments. That plastic creates a lot of problems. You’ve seen a handful of those videos circulating around the internet. A turtle with a straw up its nose, a whale covered in netting, or a bird full of trash. Many of the videos we see online end happily — a diver cuts the netting off the whale or the turtle has the straw removed — but when you think about all the stuff that we don’t see… well, it’s a good bet that most of it ends badly.

There are, of course, already a few projects that focus on cleaning the plastic out of the ocean. Boyan Slat’s Ocean Cleanup Project is probably the first that comes to mind, but another one of note is a vessel called The Manta. According to the SeaCleaners, the aptly named group behind The Manta, once it’s in the water (if all goes well, it’ll be functioning in 2024) the boat is able to collect five to 10,000 tons per year. It’s a drop in the bucket, really, but let’s imagine a time in the future where vast fleets of these patrol the oceans. Or even better, let’s imagine a time in the future where they don’t need to. The latter, though, isn’t exactly a likely scenario, so that drop in the bucket will have to do.

The Manta can extract both floating macro-waste and smaller debris from 10 millimeters down to one meter deep and can operate for up to 20 hours a day, seven days a week. It has waste-collecting conveyors to bring the trash on board, three floating collection systems to pick up surface plastic, two tiny little boats called Mobulas (which are expected to launch in Indonesian rivers in the fall of 2021) that can get into parts of the ocean too shallow or too narrow for The Manta, and two lateral cranes able to pluck the largest pieces of floating debris out of the water.

Somewhere around 80 percent of marine pollution comes from land, mainly from rivers. Ten rivers in Asia, Africa and South America, in fact, are thought to transport about 90 percent of the total plastic debris that ends up in the ocean. It’s a relatively new problem, too. Starting somewhere in the mid-1950s, we ramped up our plastic production. Ramped it up in a major way. And since then, it hasn’t really slowed: since 1990, our plastic production has jumped nearly five percent each year. According to The SeaCleaners, “global consumption of plastic has tripled in the last 25 years and is 200 times greater than in 1950.”

Now, you’re likely wondering what happens to all the plastic The Manta will collect. That’s the true genius of the vessel. After the trash is sorted manually on board all the plastic is shredded into pellets. Then, it heads down a conveyor to the Waste to Energy Conversion Unit. Once there, it’s melted at extraordinarily high temperatures through pyrolysis (which is the process of melting something in the absence of oxygen, separating it into different molecules) and converted to synthetic gas. That gas passes through a turbine, produces electricity which is then — and this is the genius part — used to power The Manta. The ship will also have a solar array, sails, and two wind turbines. If all goes according to plan, The Manta could be a real glimpse into a solution for a problem that, so far, we haven’t been able to solve.