A Radar On a Spaceship Finally Discovered Liquid Water on Mars 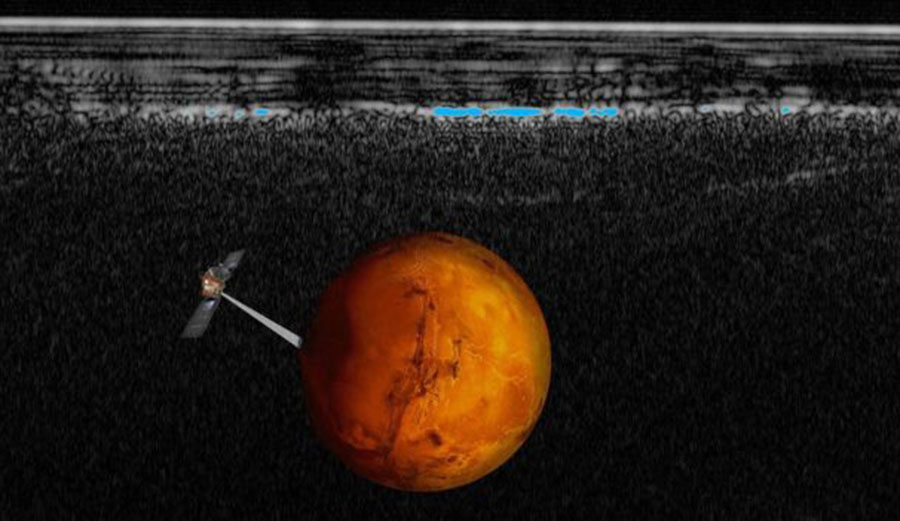 For a long time now, researchers have been looking for water on other planets. Life, as you know, is basically a no-go without it, so finding water (in liquid form) off of our little blue orb would be a pretty big deal. And it IS a big deal, because researchers found liquid water on Mars.

In the past, there have been hints that water might be present on Mars, but this is the first conclusive proof that a body of water exists on the Red Planet. In their quest to find out if Mars was ever able to support life, NASA’s Curiosity Rover, which first landed on Mars back in August of 2012, found ancient lake beds. That lead scientists to believe that there was, at one point, the possibility of life. Over the last few million years or so, however, the planet has cooled considerably, which froze everything. Or so we thought.

Now, this isn’t the kind of lake you’re thinking of. It’s not a serene body of water edged with bullrushes and pussy willows. There are no alien rowboats floating around under a warm red sky. Instead, the lake sits under the planet’s southern polar ice cap. According to Marsis, the radar on the European Space Agency’s (ESA) Mars Express Orbiter that found the lake, it’s about 12 miles wide. “It’s probably not a very large lake,” said Prof Roberto Orosei from the Italian National Institute for Astrophysics, who led the study.”This really qualifies this as a body of water. A lake, not some kind of meltwater filling some space between rock and ice, as happens in certain glaciers on Earth.” 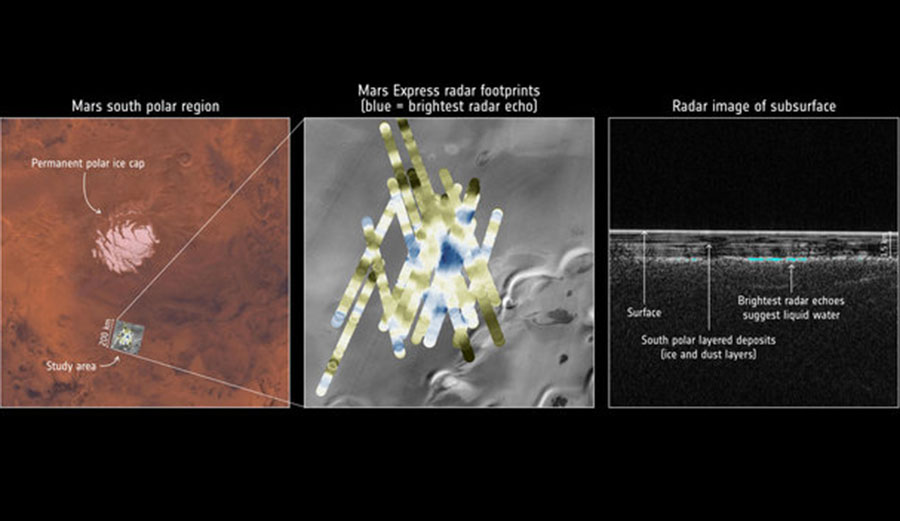 Radar data collected by ESA’s Mars Express point to a pond of liquid water buried under layers of ice and dust in the south polar region of Mars. Image: ESA

Unfortunately, they weren’t able to figure out how deep the lake might be, but they estimate that it’s at least three feet, and possibly much deeper.

Marsis sends out a signal from its home on ESA. Then, as it bounces back, researchers analyze it. Variations in the signal show different densities of whatever it’s bouncing off of. “In light blue, you can see where the reflections from the bottom are stronger than surface reflection,” Orosei” explained to the BBC. “This is something that is to us the telltale sign of the presence of water.”

While the discovery is a major one for researchers hoping to find life on Mars, no one’s getting their hopes up—but they are tentatively preparing themselves for a real alien discovery in Mars’ subsurface. “We are not closer to actually detecting life,” Dr. Patel said, “but what this finding does is give us the location of where to look on Mars. It is like a treasure map – except, in this case, there will be lots of ‘X’s marking the spots.”