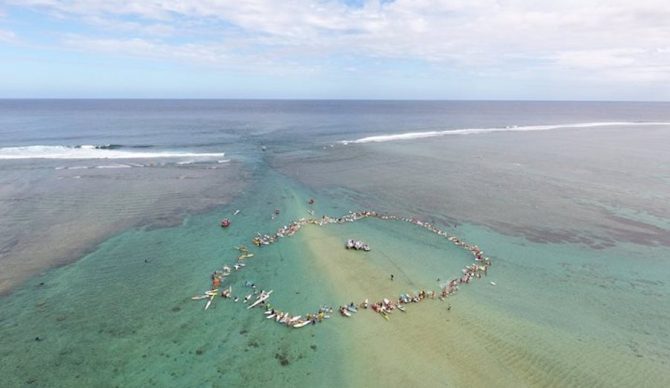 Sadly, paddle outs like these for shark attack victims have become too common on Reunion Island. Photo: Adrien May

I was quite amazed to read Morgan Dunn’s recent article “Our Fear of Sharks Drives Me Completely Nuts” on The Inertia, as it uses all sorts of dubious comparisons to show that fear of sharks is more a matter of fantasy than of reality.

On a global scale (and for the US) it might be the case indeed, as the US has an extremely low mortality rate: for its 320 million inhabitants, 3.1 million surfers, millions of beachgoers, (including Hawaii) there has been only 3 deaths between 2011 and 2017.
But in shark attack “hot spots”, the kind of argument Dunn promulgates is stupid at best and intentionally misleading at worst.

In high-risk, unprotected places like Recife (Brazil), Ballina (Australia) or Reunion Island, the population is literally terrorized and fewer and fewer people are going in the water in recent years.

Reunion Island is probably the best example. Our tiny island has recorded 9 deaths and 5 seriously maimed victims since 2011, and entering the ocean has been strictly prohibited around the island since July 26, 2013.

Less than a few hundred people have dared to enter the water since the ban, and yet, attacks and fatalities continue to increase.

If the statistics were held equal in the case of the United States, in relation to the number of their inhabitants, their coastal surface area, and most importantly the number of people at risk, the US would see thousands of deaths from shark attacks every year.

Conversely, if Reunion had the same risk as in the US, we’d see 1 death every 400 years.

The problem with conservationists/scientists & eco-moralists like Morgan Dunn, is that after an attack they seek to downplay the risks by all means, using general considerations & clichés to explain the particulars of attacks in hotspots, where precisely none of the usual rules apply.

This dishonest attitude, in turn, boosts the many would-be eco warriors/e-citizens to morbidly spread all these comparisons (even if they do not stand up to analysis), so this should also actually raise the issue of the moral responsibility of those (like Morgan Dunn) who use every trick in the book (at each & every attack) to mislead public opinion so as to “side with the shark.”

It must be noted, though, that Dunn is not the one who came up with the ridiculous comparisons he leverages in his piece… In fact, they originated in the early 2000s, from George Burgess himself (the “pope of sharks”), when he was asked to explain the resurgence of accidents in Florida. (Florida averages 30 attacks per year on average, but nothing too serious: only 1 in 150 is fatal.)

Anxious to divert opinion from his own ignorance and responsibility, he had the brilliant idea to be inspired by a “Direct Club” advertisement (a travel insurance company) to ridicule the risk of deadly shark attacks with other far-fetched & totally unlikely risks, like falling coconuts.

These ludicrous arguments can still be found on the website of the Museum of Natural History in Florida. How can such a scientific institution convey such misguided and disrespectful arguments toward victims, survivors, their families, and their loved ones?
It was also during the same period that Burgess established its famous correlation between world’s population growths (and therefore ocean user’s growths) and the increase in the number of shark attacks. As previously stated, this might be true everywhere else in the world, but not in shark attack hotspots (like Reunion Island), where more and more attacks happens even with fewer people in the water.

These amalgams are dangerous because they contribute to disinformation, and they lead thousands of hysterical Internet users believing themselves “eco warriors” and that they are on a mission to “save the planet from the apocalypse” by pitilessly harassing, blaming & challenging victims and small, bruised communities such as ours.

To conclude, I’d like to refute some of the arguments Dunn makes specifically:
1) That the film Jaws and similar films since are responsible for a negative image of sharks around the world, and human beings are killing them off as a result.
-Sharks are fished around the world not out of spite, but as a source of food, and a sustainable one at that.
-Also, the “100 million sharks caught” annually statistic fails to differentiate between preventive and commercial fishing (preventive fishing representing only 1,500 of the total number per year).

3) On being for or against sharks.
-There are 524 distinct species of sharks. Some benign to humans, some dangerous. Sharks are necessary for a healthy environment but it’s difficult to stand up and protect 300kg to 2 ton predators in areas where human activity is high.

4) Reunion Island is used as a case study to prove culling is ineffective.
-It is totally dishonest and criminal to assert this. Removing 50 sharks out of 200 necessarily reduces the risk.