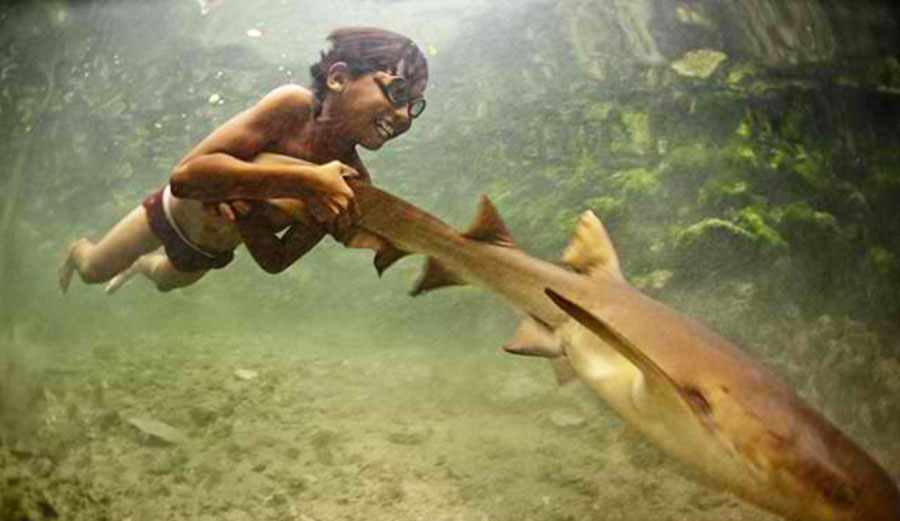 A Bajau child looking just at home underwater as above. Image: BBC/Filipinow

The Bajau Laut have been sea nomads for centuries. In the waters they call home around the Philippines, Malaysia, and Indonesia, they dive to incredible depths for pearls and for food, living off the sea like no other community on earth. They are among the world’s best freedivers. According to National Geographic, they can hit depths of 200 feet on a single breath and stay down for more than ten minutes. It’s baffling—but as researchers have discovered, they may have actually evolved for it. Their findings were published in the scientific journal Cell in an article entitled Physiological and Genetic Adaptations to Diving in Sea Nomads.

You probably don’t often think about your spleen. It sits quietly on your left side, beneath your lungs and above a kidney. Filtering your blood day in and day out, it’s a bit of a workhorse, and it’s one you could technically live without. As the largest organ in the lymphatic system, it also has the strange habit of contracting like a salted slug when you stick your face under water and hold your breath.

The mammalian dive reflex is a complicated bit of body mechanics, so we’ll plow through it quickly. An evolutionary adaptation that’s still kicking around deep in the recesses of our genes from when all life developed in the oceans, it involves four things. Your heart rate slows down, which reduces the rate of oxygen entering your bloodstream, allowing your vital organs to use it more efficiently. Your blood vessels contract, directing blood flow away from your extremities so that you’re not wasting precious oxygen on dumb things like fingers and toes. Since the lungs (and the air in them) compress as you dive deeper, the blood that moves from your extremities into your chest cavity is necessary not only for keeping the important stuff functioning properly, but also to keep your lungs from collapsing. Since it is fluid, blood doesn’t compress like air. Next, and most pertinent to our story, is something called the splenic contraction. Since your spleen is relatively large and full of blood, it (very unselfishly) squeezes all that blood into the circulatory system, which, of course, adds more oxygen into the mix. And therein lies the evolutionary advantage of the Bajau: their spleens are massive, which essentially gives them a whole bunch more oxygen when their spleens contract.

There have been thousands of studies on marine mammals, and it’s well known that they have larger spleens relative to the size of land-going mammals. Melissa Llardo, a Ph.D student from the Center for Geogenetics at the University of Copenhagen, heard about the Bajau on a trip to Thailand, she decided to figure out exactly what it is that makes them so much better at living in the ocean than any other people on earth.

“I wanted to first meet the community, and not just show up with scientific equipment and leave,” Llardo told National Geographic. “On the second visit, I brought a portable ultrasound machine and spit collection kits. We went around to different homes, and we would take images of their spleens.”

Llardo took samples from the Bajau people and from a related group on the Indonesian mainland called the Saluan. When she took everything back to Denmark and broke it all down, she found that “the median size of a Bajau person’s spleen was 50 percent bigger than the same organ in a Saluan individual.”

Think about that for a second. Because of thousands of years spent in the ocean, a tiny group of people have developed spleens that are half again as big as a regular, land-living person. “If there’s something going on at the genetic level,” Llardo continued, “you should have a certain sized spleen. There we saw this hugely significant difference.”

Unfortunately, the Bajau’s way of life is being increasingly threatened. They’ve lived off the sea for centuries, raising their children there, who often learn to swim before they can walk. They have a unique understanding of the ocean, which for them is a living entity. Traditionally, they’ve made their livings by fishing and free diving, but as the world changes, they’re being left behind. Those old sustainable practices are being replaced by much more destructive ones, like dynamite and cyanide fishing. The ocean is their life, but in the last few decades, many of them have been forced to move to land. So although they may have evolved to live in the ocean, time will tell how long they can actually stay there for.