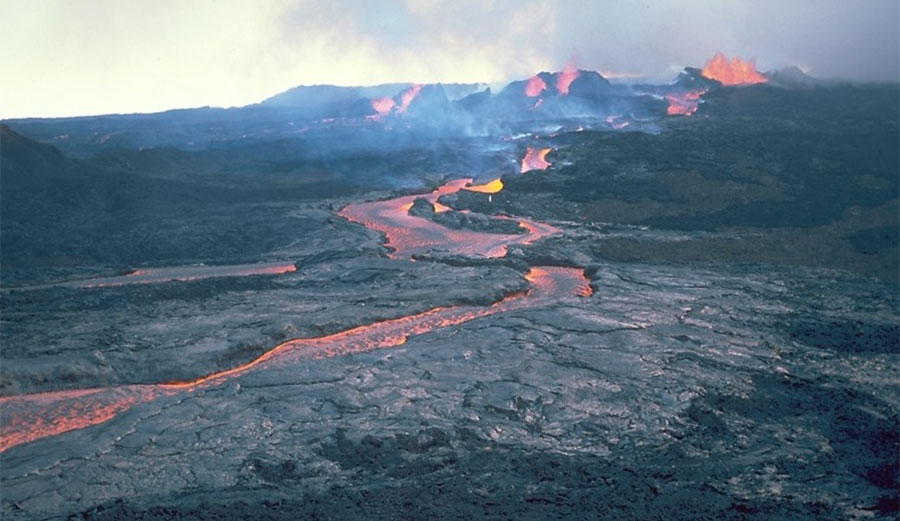 A lava flow on Mauna Loa during the last eruption in 1984. Scientists are worried it might happen again soon. Photo: Wikimedia Commons

Officials in Hawaii have sounded the alarm for Big Island residents. Mauna Loa, the largest active volcano on Earth, is rumbling, and it looks like it might be getting ready to blow.

“Not to panic everybody, but they have to be aware that if you live on the slopes of Mauna Loa,” said Talmadge Magno, the administrator for Hawaii County Civil Defense, “there’s a potential for some kind of lava disaster.”

Although scientists aren’t saying that an eruption is imminent, they are worried about a spike in the number of earthquakes on the volcano. That generally happens when a volcano is in the early stages of an eruption. As magma flows into the summit reservoir system from underground, it sets off the quakes. There are usually 10 to 20 small ones every day at Mauna Loa’s summit, but in recent weeks that number has jumped to 40 to 50.

Hawaii’s civil defense agency is recommending that all residents make a an emergency travel bag that includes food, and create an evacuation plan. Since the volcano makes up more than half of the Big Island’s landmass, an eruption would affect most, if not all, residents of the island.

Since the last eruption in 1984, the Big Island has been extensively developed. According to the Associated Press, “its population has more than doubled to 200,000 today from 92,000 in 1980.”

A few years ago, in 2018, Kilauea erupted on the Big Island. It destroyed nearly 1,000 homes and produced some incredible footage of lava flows. Mauna Loa, however, is even steeper than Kilauea, so the lava flows would move faster, should it erupt.