When Boyan Slat first came on the scene, there was a lot of excitement surrounding his idea to rid the ocean of the plastic scourge. Donors like Silicon Valley philanthropists Marc and Lynne Benioff, as well as PayPal founder Peter Thiel, threw fistfuls of cash at him. The Ocean Cleanup Project raised $31 million, which enabled the shaggy-haired Dutch kid to launch the enormous array that (hopefully) will motor around the high seas picking up vast amounts of our trash. Like any giant idea, though, it had more than its fair share of detractors. One of their biggest gripes was the fact that taking the plastic out of the ocean won’t actually do much good. Without stemming the flow of plastics coming from rivers, it’s a little like wiping up the blood without stitching up the wound.

“Focusing clean-up at those gyres, in the opinion of most of the scientific community, is a waste of effort,” marine biologist Jan van Franeker of Wageningen Marine Research in the Netherlands told Science. “It’s a lot of money to reduce something that disappears in 10 to 20 years, if you stop the input.”

Well, Slat has an answer for that. He did last year, too. “We need to do both,” he said in 2018. “We need to intercept plastic before it becomes ocean plastic. And we need to clean up what is out there.” And recently, he put his money where is mouth is. His new creation is called The Interceptor, and its aim is to stitch up the wound.

Rivers, obviously, are the main source of ocean plastic pollution. According to Ocean Cleanup research, 1000 rivers around the world are responsible for some 80 percent of the pollution.

“To rid the oceans of plastic, we need to not only clean up what is already out there, but also stop new plastic from entering the ocean: we need to close the tap,” the team wrote. “Working together with government leaders and private corporations, our goal is to tackle these 1000 most polluting rivers, all over the world, by 2025.”

So how does The Interceptor work? Well, much like the Ocean Cleanup array, it’s a very simple idea: river waste flowing downstream is guided by a barrier into the mouth of the Interceptor, which is a catamaran. The waste floating on top goes up a conveyor belt and the water continues on its way towards the sea. The debris moves along the conveyor and into a shuttle, which, using sensor data, fills a series of dumpsters until they’re all full. From there it’s taken to a recycling facility.

Right now, there are already two Interceptors in operation. The very first one, which is a prototype, is currently deployed in the Cengkareng Drain in Jakarta, while the second is in the Klang River running through Kuala Lumpur. 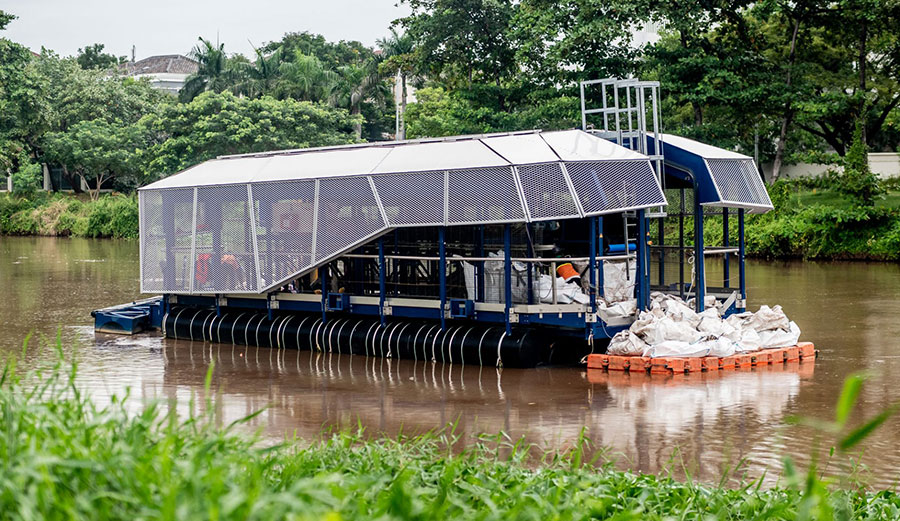 It should be noted that the Interceptors are in the early stages of development, much like the Ocean Cleanup array, but like any good project, it will take some time to work the kinks out. While they’re working those kinks out, there will undoubtedly be a handful of vocal critics who prefer to shit on a well-meaning idea instead of actually doing anything themselves, but Boyan Slat, as he’s already proven, will not be deterred.