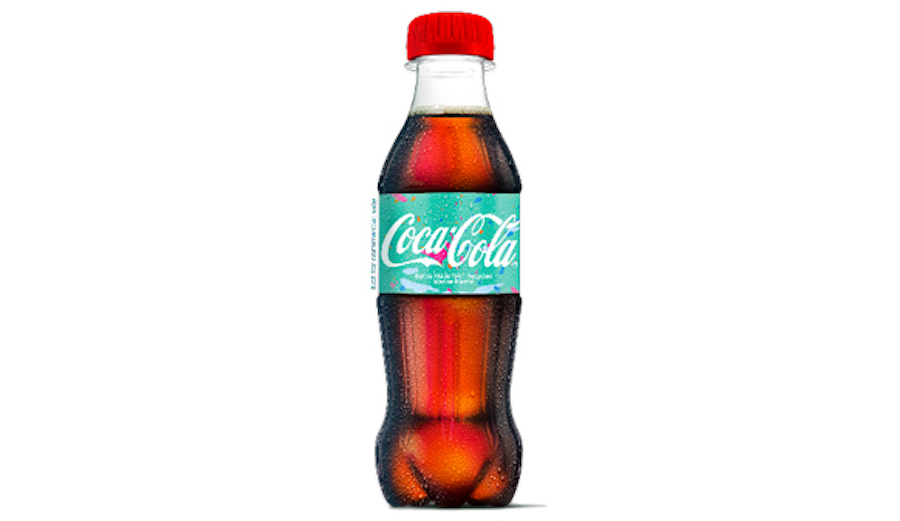 Coke just unveiled early samples of bottles made with ocean plastic. The beverage behemoth is the latest corporation to jump on the make-stuff-from-ocean-plastic train Photo: Coca-Cola

The buzz around the scourge of single-use plastics has reached a fever pitch and some of the world’s largest corporations are taking note.

In case you haven’t heard, Starbucks has plans to be plastic-straw-free by 2020 (no word yet on those pesky plastic lids), American Express launched the first ocean plastic credit card earlier this year, and Adidas has been making garb from upcycled ocean plastic for some time. And, the latest corporate giant to jump onboard the make-things-from-ocean-plastic train? Global beverage giant Coca-Cola.

Earlier this week, Coke unveiled the first-ever sample bottle made in-part with recovered and recycled marine ocean plastics. According to a release, the company has produced about 300 bottles so far, all of which are made with approximately 25 percent recycled plastic collected in the Mediterranean sea and surrounding beaches.

It’s a small start, but Coca-Cola says it demonstrates proof of concept and is hopeful about scaling up.

“The marine plastic bottle has been developed to show the transformational potential of revolutionary ‘enhanced recycling’ technologies, which can recycle previously used plastics of any quality back to the high-quality needed for food or drink packaging,” explained Coca-Cola in a release.

“Enhanced recycling technologies use innovative processes that break down the components of plastic and strip out impurities in lower-grade recyclables so they can be rebuilt as good as new,” the release goes on. “This means that lower-grade plastics that were often destined for incineration or landfill can now be given a new life.”

By 2030, Coca-Cola hopes to make all of its bottles from at least 50-percent recycled plastic globally.

The broader goal here, though, is scaling the technology to theoretically eliminate plastic waste altogether.

According to The Guardian, globally humans purchase around one million plastic bottles every minute. Fewer than half of those bottles get collected for recycling in 2016 and of those, only about seven percent were turned into a new plastic bottle. The environmental impact of consumption at those levels goes without saying.

If the claims of these enhanced recycling technologies Coca-Cola is supporting are to be believed, especially once scaled, the result could be a major step toward ridding the world’s oceans of plastic.

“Enhanced recycling technologies are enormously exciting, not just for us but for industry and society at large,” said Bruno van Gompel, technical and supply chain director of Coca-Cola’s Western Europe division. “They accelerate the prospect of a closed-loop economy for plastic, which is why we are investing behind them. As these begin to scale, we will see all kinds of used plastics returned, as good as new, not just once but again and again, diverting waste streams from incineration and landfill.”