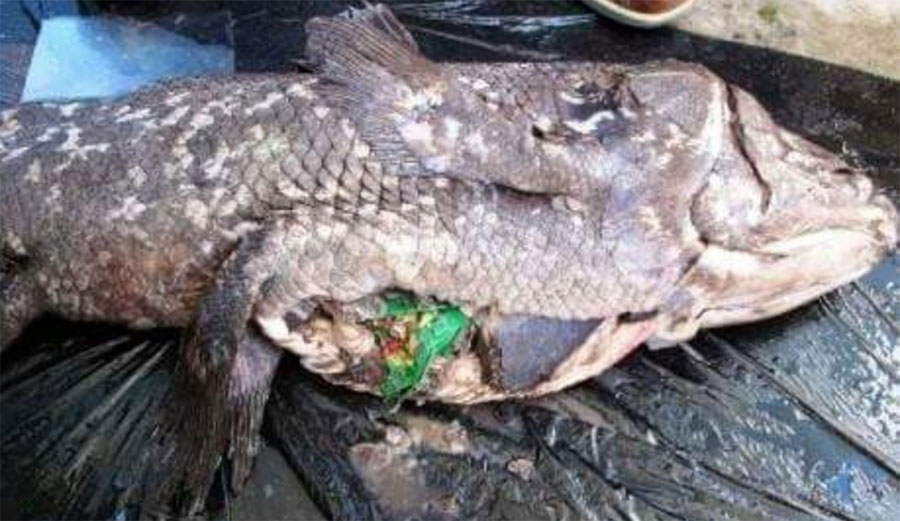 This shouldn’t even be possible. Image: Blue Planet Society

Coelacanths aren’t the most common fish. In fact, they were thought to be extinct until December of 1938, when a Museum curator named Marjorie Courtenay-Latimer was inspecting the bycatch of a fisherman in South Africa. Turns out they were just hiding in the deepest bits of the ocean remaining virtually unchanged for 400 million years. Now, they’re eating potato chip bags.

The photo you see above was actually taken back in 2016, but didn’t gain as much traction online as many other trash-related animal deaths, like that pelican with the lighter or those sperm whales that washed up in Europe.

Still, though, the fact that a creature that’s been around since way before the dinosaurs and lives in a place where we can’t get to is able to eat a floating bag of chips says volumes about how far-reaching our damage has become.

Unchanged for 400 million years, even the ‘living fossil’ coelacanth isn’t immune from our trash. Not the best advertising for @LAYS. #plasticpollution #plasticfree pic.twitter.com/AFpy8OdSkr

“Unchanged for 400 million years, even the ‘living fossil’ coelacanth isn’t immune from our trash,” tweeted the Blue Planet Society. “Not the best advertising for @LAYS.”

Coelacanths, while not the comeliest of creatures, have managed to survive for for hundreds of millions of years. Now, though, with out garbage floating around and our lust for a never-ending supply of fish, they’re in dire straights. Researchers estimate there may only be around 10,000 in total. Although they apparently taste awful and have no commercial value they’re often caught up in deep sea trawling operations. According to IFLScience, they’re a popular aquarium fish, even though the don’t last long in a tank.