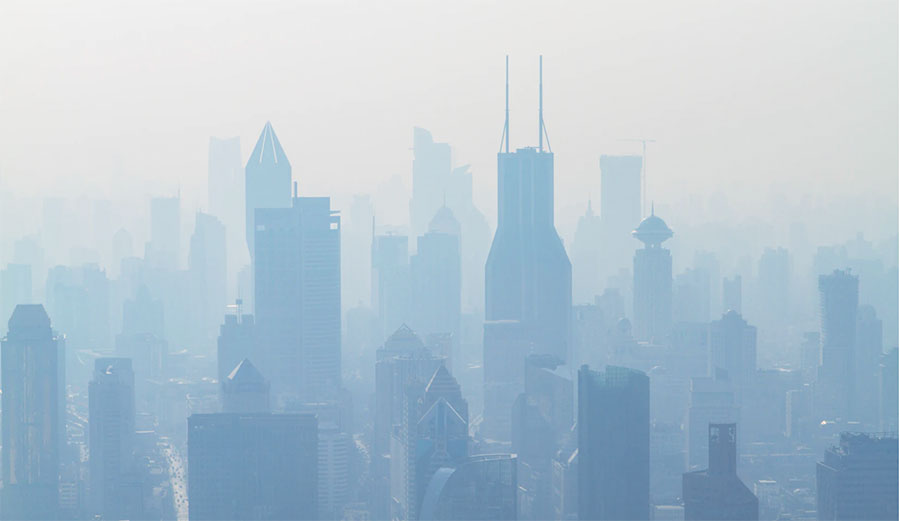 Shanghai, China, on a “bad air quality day.” Pollution levels all over the world are falling drastically as the Coronavirus pushes entire industries to batten down the hatches. Photo: Unsplash/Holger Link

The world is grinding to a halt as the Coronavirus sweeps across the globe. It’s a strange world we’re living in right now: schools and businesses shuttered; shelves emptied; shelter in place orders. Hospitals are overwhelmed in places like Italy, where, as of this writing, the death toll has overtaken China’s. The Italian military has been called in to cart away the dead. Around the world, nearly 220,000 people have been infected. More than 8,000 are dead. We’re living through a disaster of enormous proportions, and although it is horrible and tragic, there is at least one small silver lining: pollution levels are plummeting.

According to the BBC, researchers in New York found that carbon monoxide levels — mainly from vehicles — are down nearly 50 percent compared with this time last year. Scientists said that by May, generally the month where CO2 emissions are at their highest thanks to the decomposition of leaves being added to the mix, the levels recorded might be the lowest in over a decade.

“New York has had exceptionally high carbon monoxide numbers for the last year and a half,” said Columbia University’s Professor Róisín Commane, who carried out the New York air monitoring work, “and this is the cleanest I have ever seen it. It’s is less than half of what we normally see in March.”

It’s not just New York, either. Both China and Northern Italy have seen huge drops in nitrogen dioxide, a gas that forms from emissions from cars, trucks and buses, power plants, and off-road equipment. It’s primarily responsible for acid rain and that haze you see over large, bustling cities.

Carbon Brief, a UK-based website covering the latest developments in climate science, climate policy, and energy policy, reported that Coronavirus has temporarily reduced China’s CO2 emissions by as much as a quarter over a two week period — which, if taken into account over the span of an entire year, will result in about a 1 percent drop in carbon emissions from China. 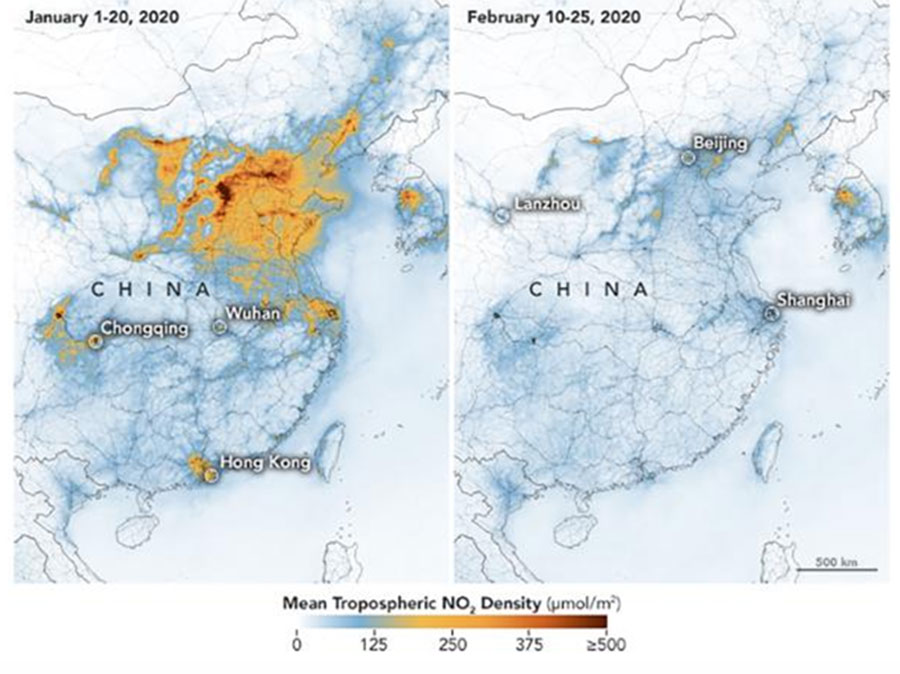 “This is the first time I have seen such a dramatic drop-off over such a wide area for a specific event,” says Fei Liu, an air quality researcher at NASA’s Goddard Space Flight Center.

According to China’s Ministry of Ecology and Environment, in February alone, the average number of “good quality air days” increased 21.5 percent compared to the same period last year.

“This is the first time I have seen such a dramatic drop-off over such a wide area for a specific event,” Fei Liu, an air quality researcher at NASA’s Goddard Space Flight Center, told CNN. “I am not surprised because many cities nationwide have taken measures to minimize the spread of the virus.”

As more and more countries lockdown, it’s likely that levels of pollution all over the planet will drop drastically. All this comes with a caveat, however: when the pandemic is over, it’s likely that emissions will temporarily climb higher than before. The BBC reported that after the global financial crash in 2008, carbon emissions leaped 5 percent higher than average as stimulus spending ramped up economies. That bounce-back is a common enough phenomenon that it’s earned a catchy little name: “revenge pollution.”

“There might be a round of economic stimulus which would inject cheap credits to heavy industries in China,” said Li Shuo, a senior climate policy adviser for Greenpeace East Asia. “As a result of that we might see increasing pollutants and also carbon emissions in the second half of this year.”

After the 2008-09 financial crisis, the Chinese government pumped $586 billion into the economy in an attempt to kickstart it. Most of that went into enormous infrastructure projects, which lead to a pollution explosion bad enough to force the government to launch an air pollution action plan.

So while time will tell exactly how things play out — and how long the pandemic lasts — we’ll have to wait and see whether or not we learn from the past. It’s worth remembering this old saying: “Those who do not learn history are doomed to repeat it.”