Crazy Creature of the Week: The Sawfish 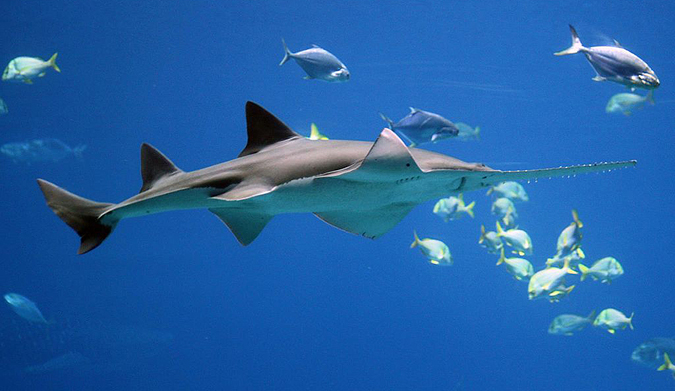 A crocodile and a shark in one species is any prey’s worst nightmare. The sawfish combines the main predatory features of these two notorious animals and looks like it should be able to help you build a house. Unfortunately, humans being humans, we decided that developing their natural habitat – nearshore and inshore coastal areas – for our own benefit was a priority. As a result, like other sea creatures before the sawfish, their population numbers have seen a major downturn. In my opinion, this is the coolest sea creature we’re killing off these days. Behold, the power of man!

As long as the sawfish is around, however, let’s marvel at its predatory abilities and aesthetic oddities. For starters, its long snout is lined with a row of sharp teeth on either side – obviously where the “saw-” comes from. When it snaps into attack mode, the body and head are able to twist and bend laterally much quicker than you’re able to react, thus making the saw a formidable weapon (as evidenced by the below video).

Fortunately for the sawfish, and unfortunately for unsuspecting prey, the rostrum (technical term for its prickly schnozz) has electrosensitive pores that can detect nearby critters. This means that the lack of visibility in the murky water it’s most commonly found in makes no difference. It’ll find what it’s looking for. Kind of like aquatic x-ray vision. Plus, once it finds its lunch, the saw doubles as a shovel of sorts to dig up hidden crustaceans. But wait! There’s more. The spiked snout also stuns prey so the sawfish may leisurely devour them. As if a long, spiked weapon wasn’t enough.

Found at lengths of up to 25 feet, the sawfish would appear to be a nightmare for all. 25 feet in length and holding a chainsaw-esque weapon? It reminds me of Leatherface in The Texas Chainsaw Massacre. But fear not, as the sawfish isn’t an aggressive predator towards humans. The saw is mainly used for hunting its small prey, self defense against sharks and other such apex predators as well as divers that get too close. You know it’s not coming after you because sawfish are famously lazy animals, known for resting on the ocean floor and making the least effort possible for sustenance.

The sawfish is considered “critically endangered” according to the BBC and their worldwide population has been depleted by over 90%. It is now illegal to fish for them though their fins sell for quite a lot at shark fin markets worldwide and the fish’s saw fetches a pretty penny – $900, according to this vendor. Pretty sick, huh?

Want to see more Crazy Creatures of the Week? Check out the Coconut Crab, Nomura’s Jellyfish, the Oarfish, and the Goblin Shark.