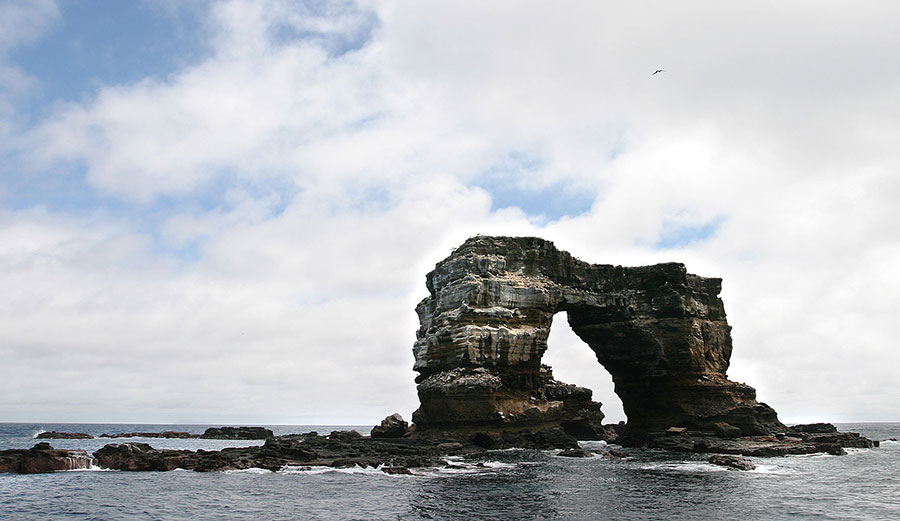 Darwin’s Arch, one of the most famous natural wonders in the world, has collapsed. The rock formation, which lies at the northernmost end of the Pacific Ocean archipelago, used to stand just off Darwin Island in the Galapagos. According to the environmental ministry of Ecuador, it collapsed because of erosion.

“This event is a consequence of natural erosion,” the ministry explained. “Darwin’s Arch is made of natural stone that at one time would have been part of Darwin Island, which is not open to visits by land.”

The collapse of the arch, which is one of the best places on the planet to dive, was witnessed by a diving boat. It happened at 11:20 a.m. on Monday. Thankfully, no one was harmed. The site plays host to an extraordinary amount of sea life, including sea turtles, whale sharks, manta rays, and dolphins.

When it was intact, the arch was a little over 141 feet high and 230 feet long. Believed to be once part of Darwin Island, it was shaped over the centuries by wind and waves.

“The beauty of nature lies not in its permanence, but in its constant transformation,” the Galapagos Conservancy said in a statement. “Galapagos, more than any other place on Earth, is a symbol of evolution and change, so although we are saddened to lose this iconic structure due to natural erosion, it is a reminder of the power of nature’s architecture and the need to preserve wild places while we still can.”

Darwin’s Arch was named after Charles Darwin, who famously explored the islands in 1835 on the HMS Beagle. It was there that he developed the theory of evolution.

In 1978, the importance of the Galapagos Islands was recognized by Unesco. The archipelago was the first world heritage site. There are plants and animals there that aren’t found anywhere else on Earth, and about 30,000 people are spread throughout the archipelago.

“The collapse of the arch is a reminder of how fragile our world is,” Jen Jones of the Galápagos Conservation Trust told CNN. “While there is little that we as humans can do to stop geological processes such as erosion, we can endeavor to protect the islands’ precious marine life. Galápagos Conservation Trust is working with partners to protect (marine life such as) sharks both within the Galápagos marine reserve and on their migrations outside in the wider eastern tropical Pacific.”