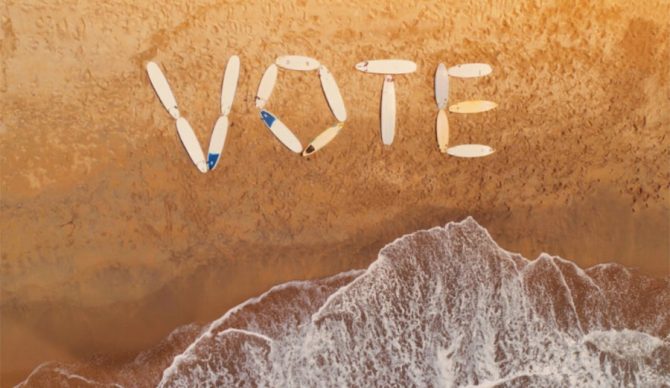 You surf. Will you vote? Photo: Blue Uprising

As Election Day nears in the United States, we’re going into overdrive to amplify voices that are speaking out about important issues. A few weeks ago, I shared an overview of a panel I moderated about justice, equity, diversity, and inclusion in the outdoors. Today, I want to talk about what it means to give a voice to our lands and oceans, and how we can elevate environmental issues into the political landscape.

I recently spoke with my friend and colleague Nathaniel Stinnett, Founder and Executive Director of the Environmental Voter Project about how environmental activists are stepping up into the voting scene unlike any other time in history.

Previously, advocates for the environment have not been overly involved in politics for a number of reasons. Climate change and environmental advocacy is a bi-partisan issue—one that no past candidate has made a part of their primary platform. Nathanial shared that just four years ago “only 2% of likely presidential voters listed ‘climate or the environment’ as their top priority, and millions of environmentalists didn’t even bother to vote.”

Since then, a number of factors have changed the game for environmental advocates.

The current administration has taken more liberties on reversing public land acts and environmental protection laws than any other president—100 to be exact.

In the past year, advocates for other social justice issues have utilized their voices to highlight intersectionality between land and landscape to other important issues like racial equity, LGBTQ+ issues, gender equality, and more. Throw in the heavy volume of weather disasters and catastrophes in the past four years, and we’ve seen the public speak up about the environment in great capacities.

“About halfway through 2018, the climate-voter movement began to awaken, largely thanks to first-time environmental voters who were newly politicized by President Trump’s environmental positions,” says Stinnett. “A crop of Democratic congressional candidates, including Sean Casten, Mike Levin, and especially Alexandria Ocasio-Cortez, added life to this movement by focusing on climate change as a signature issue.”

Nathaniel found that, now, climate voters make up a stunning 12% of the likely presidential electorate. He adds: “12% would equal approximately 18 million “climate-first” voters casting a ballot, more than triple the number of NRA members.”

Likewise, the Environmental Voter Project team discovered that climate voters may be particularly influential in swing states. Recent polling shows that 89% of Floridians are concerned about climate change, including 86% of Republicans. 67% of Pennsylvanians consider climate change to be a ‘serious problem,’ with nearly half calling it ‘very serious.’ And, perhaps most interestingly, recent polling in Arizona, North Carolina, Maine, and Iowa by Data for Progress reveals that bold climate leadership could be the best way to appeal to swing voters in U.S. Senate races.

Nathaniel says, “These are the facts: climate change is now a top-three voter priority, climate voters are turning out in unprecedented numbers, and battleground state voters of all stripes are deeply concerned about the climate crisis.”

Protect What You Love: Speaking Up For The Ocean

An important piece of the environmental activist puzzle is the promotion and advancement of ocean preservation issues. For surf communities specifically, our sport and recreation absolutely depend on marine and coastal ecosystem conservation. As the founder of Vote the Ocean, our mission is to inspire people to take action for our ocean and support and encourage our surf communities to speak up about the issues facing our ocean. To keep our coasts healthy, it’s essential that we advocate for issues like waste reduction and coastal access for all.