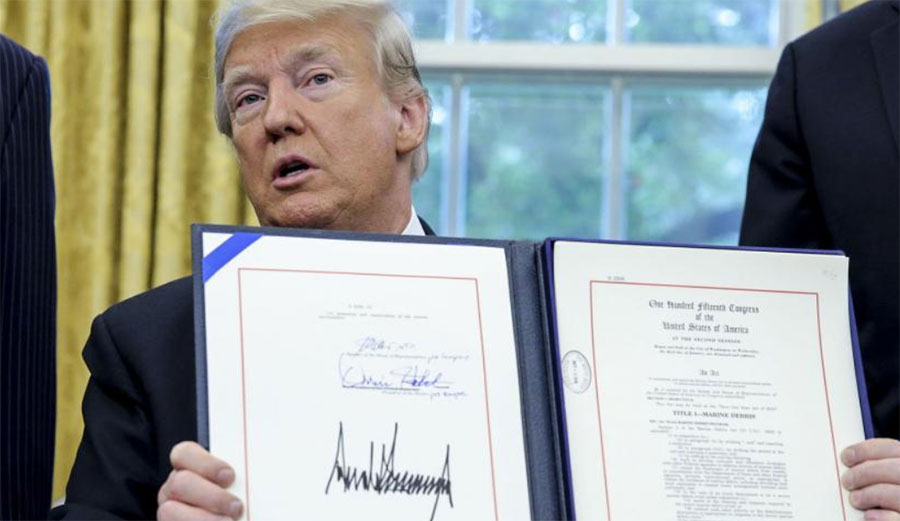 President Donald Trump holds up a signed S. 3508, the “Save Our Seas Act of 2018” during a ceremony in the Oval Office of the White House on Thursday. Photo: Oliver Contreras/UPI | License Photo

On October 11, President Donald Trump signed something that’s good for the ocean. It’s called The Save Our Seas Act, and it puts funding in place for the National Oceanic and Atmospheric Administration’s Marine Debris Program.

“This waste, trash, and debris harms not only marine life, but also fishermen, coastal economies along America’s vast stretches,” President Trump said. “The bad news is it floats toward us. I’ve seen pictures recently, and some of you have seen them, where there’s a vast, tremendous, unthinkable amount of garbage is floating right into our coast, in particular along the West Coast.”

Donald Trump has not been particularly concerned with the environment thus far. He’s made it clear that money trumps all, which is a sentiment that many agree with. He opened up vast chunks of the ocean for drilling, shrunk national monuments, and undid legislation that prevented farmers from dumping agricultural chemicals into streams. In the face of hard facts presented by researchers from all over the world, he famously said climate change is a hoax made up by the Chinese, and he appears to masturbate with fistfuls of coal. Because of all that, it may come as a surprise that he signed his name on a bill that helps get trash out of the sea. A good surprise.

The Save Our Seas act passed the House and the Senate in July, and it “reassures funding to clean-up marine debris via funding through the National Oceanic and Atmospheric Administration Marine Debris Program.”

The NOAA’s Marine Debris Program was created through the Marine Debris Act, which was signed into law by George W. Bush in 2006 and amended in 2012.

He then went on to say that he’s spoken with foreign governments about what to do about the issue in his typically America-first way. “We will be responding, and very strongly,” he said. “As president, I will continue to do everything I can to stop other nations from making our oceans into their landfills.”

According to the Ocean Conservancy, over 4 million metric tons of plastic in the ocean’s comes from just a few countries in Southeast Asia. China, Indonesia, the Philippines, Thailand, and Vietnam are the worst offenders. “It’s incredible when you look at it,” Trump said. “People don’t realize it, but all the time we’re being inundated by debris from other countries.”