Trump’s 100 Day Plan is good in some ways. In others, it’s terrifying. Image: DOMINICK REUTER/AFP/GETTY IMAGES

On Election Day, I sat on my porch and had friends over for dinner. CNN’s live coverage played in the background, but for the first hour or two it was largely ignored, save for regular glances to keep ourselves updated. The dinner sounded like any dinner on a porch: laughter, cutlery clinking, and crickets. It didn’t take long before the mood began to change. The higher the chance that Trump was going to win, the quieter it got. Soon it was silent, except for the crickets.

So now Trump is the President of the United States. The people have spoken. Hillary has conceded, and we have a horrible, orange, bloated cartoon-person leading the nation. As much as it pains me to say, I can see why it happened–I’m as tired of the steaming pile that is the American government as the next person, and Hillary became the face of that pile. I wasn’t tired of it enough to actually VOTE for Trump, though. Things are broken, and in recent years it’s never been more apparent.

Anyway, he’s in now, despite the fact that something like 49% of eligible voters didn’t vote and Hillary took the popular vote. Like Donald says, the system is broken. Ironic that the very thing he was railing against helped him become the leader of the nation who hated the thing he was railing against. Holy shit, Donald Trump is the leader of the nation. We’re going to hear State of the Union Addresses from Donald fucking Trump.

Like many of you, I’m a little nervous. I’m actually writing this from Canada, although I didn’t leave because Donald Trump won. I simply left because I already had a plane ticket. He just released his 100-day action plan, and for anyone who cares about the environment, it is an absolute disaster. Let me just say something real quick to those climate-change deniers, the ones who say “the climate has always been changing.” You’re right, it has. No one is saying that’s not true. No one is saying that climate change is man-made. What they ARE saying is that the way we live is accelerating it. We’re just helping it along at a rate far higher than ever before. That’s all. And if you can look at the Los Angeles skyline on a smoggy day or at a Shanghai smog so thick you can’t see across the street and tell me that that’s ok for the environment… well, you’re a lost cause.

Parts of Donald’s action plan are pretty ok. Parts of them are pretty good, actually. But parts of it are really, really bad. Despite the fact that climate change has been proven to be a real thing that we’re really contributing to that has very real ramifications, Donald Trump just closes his eyes and covers his ears. He just hired a new head of the EPA named Myron Ebell. Here’s the scary part about that: Ebell is just about the biggest, loudest climate change denier on earth. Among many other things, he’s the chairman of a group that’s not only questions climate change but opposes energy-rationing policies. In short, he’s kind of guy that says “drill baby, drill” who says that Sarah Palin is intelligent. That, along with Trump’s statement that climate change is a “hoax perpetrated by the Chinese,” is cause for serious alarm. 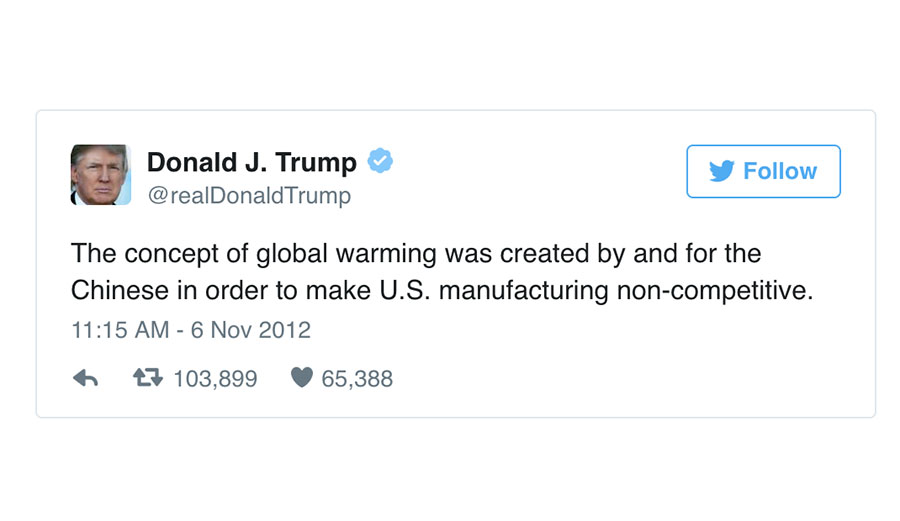 I’m aware that the economy is important, and oil and gas are important to the economy. I worked in the oil patch for nearly a decade. Like most other “libtards”, I’m not saying that we need to stop oil and gas in its tracks. I’m just of the opinion that it’s time to start branching out and looking for other options because it’s clear that there are others and it’s even more clear that oil and gas ain’t all that great. Trump has also pledged to pull out of the Paris agreement. “The billionaire climate skeptic has said he would not only disentangle the United States from the deal reached by nearly 200 countries last year near the French capital but also withdraw all funding from the U.N. Framework Convention on Climate Change and redirect climate programming funds to infrastructure projects,” wrote Jean Chemnick in Scientific American.

So let’s have a look at two of the scariest points in Trump’s 100-Day Plan. He plans to:

… lift the restrictions on the production of $50 trillion dollars’ worth of job-producing American energy reserves, including shale, oil, natural gas and clean coal.

While the underlying motives, at least from Trump’s point of view, are clearly to create more jobs and bring in more money–good things, to be sure–going back to the stone ages is not the way to go about it. It the face of nearly every other country and every respected researcher on earth saying that yes, there is a problem (and again, you shouldn’t need a researcher to tell you that pumping millions of tons of extra garbage into our atmosphere is bad), Trump is adamant that there isn’t.

I hold two citizenships–Canadian and American–and I’m proud of both of them. I’m proud to be a part of two incredible countries. But right now, like so many others, I’m embarrassed that Donald Trump even had a shot at becoming the leader of the nation, let alone winning the presidency. In an open letter from the National Academy of Sciences signed by hundreds of scientists, “a Trump presidency ‘would make it far more difficult to develop effective global strategies for mitigating and adapting to climate change,’ adding that the consequences would be “severe and long-lasting” for America’s international credibility and for the planet.”

The rest of the world is laughing at us. While most developed nations are looking ahead to the obvious, greener future, we’ve just stepped back in time. The United States will be lost in the dust, and we’ve always been proud of the fact that we’re forward-thinking. That is, after all, what made this nation great to begin with.

When I landed in Canada the day after the election, the overwhelming sentiment was disbelief. The customs lady actually laughed at me. “You made your bed,” she chuckled as she looked at my address. “Now you’ve got to lie in it for 4 years!”

The United States has become a joke; a backwaters hillbilly with his head in the sand making moonshine and chewing tobacco, proud of his ignorance, his guns, concerned only with his own wellbeing, and uninterested in anything outside his little bubble. It’s not a funny joke, though–that backwaters hillbilly has a lot of guns, and he might just be dumb enough to use them.