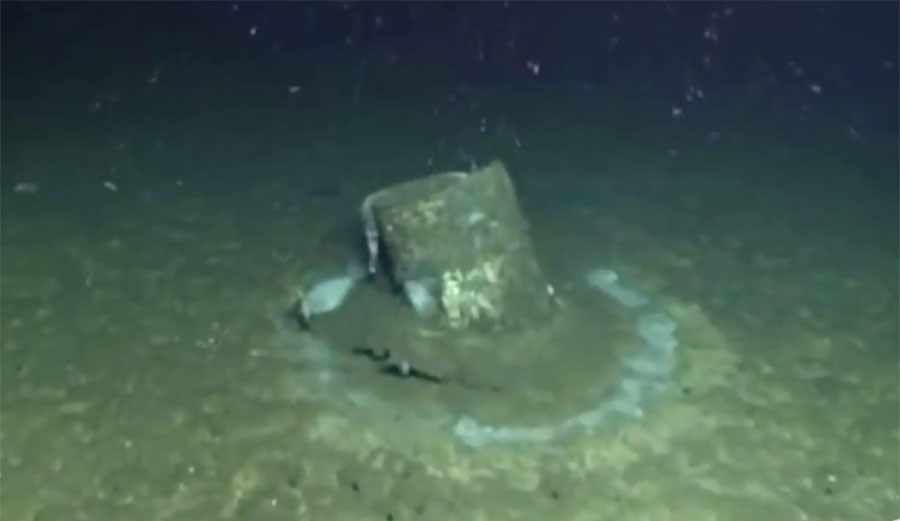 One barrel of thousands that Dr. Valentine found about 10 miles off the coast of Los Angeles. Photo: Screenshot/Valentine’s ROV Jason/CBS Los Angeles

In the waters between Catalina Island and Long Beach, there lies a toxic waste dumping ground so poisonous it’s thought to be responsible for a massive spike in cancer in California’s sea lions. Hundreds of thousands of barrels of DDT are on the ocean floor, and they’ve been there for decades.

The dumping ground’s existence, however, wasn’t confirmed until relatively recently. Although rumors of the DDT dumping ground have been whispered about in the scientific community for more than three decades, not one single person has been able to confirm them — until now.

“It’s a feeling of — how does nobody know about this?” said UC Santa Barbara professor Dr. David Valentine, the man who first laid eyes on the site. “How is it that we are the first people to ever see this with our eyes?”

Dr. Valentine has been working for years to prove that the toxic waste dumping site does indeed exist. As the rumor went, from the mid-1940s up until the 1970s, the biggest DDT manufacturer in the United States used the area to dispose of all sorts of toxic materials.

In 1947, the Montrose Chemical Corp. opened up shop in Torrance, California. At the time, DDT was thought of as a good thing. Used to protect soldiers against malaria and typhus during the Second World War, it was also discovered to be a powerful pesticide. According to some reports, the United States was using up to 80 million pounds of it in those early post-war years.

Over the next few decades, though, it became apparent that DDT wasn’t the miracle chemical we once thought. Researchers sounded the alarm over what it could be doing to the planet, and the alarms were loud. DDT can take hundreds of years to break down and stores easily in fat cells. Once it’s inside an animal, the effects are myriad and awful. By the mid-1960s, scientists were finding fish covered in tumors, birds laying eggs with shells so thin the chicks inside couldn’t survive, and sea lions full of DDT giving birth prematurely to their pups, among other things.

Finally, in 1972 and after years of battling against chemical companies, DDT was banned in the United States. But that’s far from the end of the story.

As it turned out, Montrose Chemical Corp. had been dumping its toxic waste down the drain — literally. Sewage pipes that poured into the ocean off the coast of Southern California were being used to funnel it directly into the sea. Over the years from the 1940s to the 1970s, Montrose devastated a 34-square-mile section off Palos Verdes.

But Dr. Valentine suspects that Montrose didn’t only get rid of its waste by dumping it in the sewers. According to reporting by the LA Times, “shipping logs show that every month in the years after World War II, thousands of barrels of acid sludge laced with this synthetic chemical were boated out to a site near Catalina and dumped into the deep ocean — so vast that, according to common wisdom at the time, it would dilute even the most dangerous poisons.”

Although the deep sea hid what had occurred for decades, the DDT waste was still down there, slowly leaking from punctured or rusting barrels, poisoning the water and all the creatures in it. But the exact dumping site was unknown, as was the extent of it. In 2011, Dr. Valentine decided to put an end to the questions.

Valentine, who looked for the barrels using research equipment loaned out for other projects, would spend a few hours at the end of other missions scouring the area off Santa Catalina Island. On one particular day, when he and his team were studying methane seeps, he hit pay dirt. At about 3,000 feet down, their deep-sea robot stumbled across a pile of broken barrels.

“Holy crap. This is real,” Valentine told the L.A. Times. “This stuff really is down there. “It has been sitting here this whole time, right off our shore.”

As time went on, a picture of just how enormous the dumping site really is came into focus.  “We’re talking about hundreds of thousands of barrels of industrial waste, much of it toxic, that we just dumped there because it was easy,” Valentine said.

In 2020, Valentine published his research. It’s sickening to say the least, but it does shed some light on a few burning questions. Researchers have been concerned with the obscenely high levels of DDT and the cancer rates in California’s sea lions for a long time now.

According to the Marine Mammal Center, a quarter of California sea lions have cancer. Although DDT isn’t a concern to swimmers or surfers, the fact remains that there is an underwater toxic dump ten miles from the coast of Los Angeles that’s killing animals, and something needs to be done about it.

Just what can be done, however, is unclear. The Scripps Institution of Oceanography is currently surveying the huge area to figure out exactly how bad the damage is and what can be done, but at 3,000 feet deep, the cleanup effort looks daunting, to say the least.

“I think it’s yet another reminder,” Dr. Valentine told CBS Los Angeles, “of how we need to interact with nature in order to have nature.”