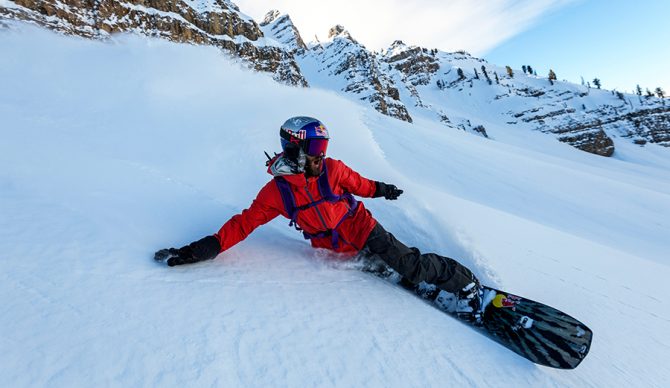 Nick Russell wants everyone to be able to enjoy this for generations. Photo: Fredrik Marmsater / Red Bull Content Pool

Speaking from his home near Lake Tahoe, Calif., the first thing snowboarder Nick Russell mentions is the weather. “Today is actually the first morning that there was blue skies,” he tells me, referencing the blazes that were smoldering in the majority of California forests, “That’s a welcome break.”

Tragically, these ceaseless wildfires are just the most recent indicator of the human-induced changes afflicting our climate, and sporting industries at the mercy of the elements have taken a hit.

Torrential flooding, scorching fires, earth-altering drought and quakes – even an unrelenting pandemic – our current state of affairs is ominously Biblical. Our carelessness has thrashed our Eden, pushing us dangerously close to the point of irreversibility. Gone are the patterns of the snow and summer seasons, replaced with unpredictable fires, flash floods, deadly mudslides, and ongoing drought – nature’s new norm now regularly appearing on our weather radars. Maybe now, as our desecration catches up to us, we will finally be forced into something like true, progressive change.

As it stands, the Lake Tahoe area in which Russell lives, takes the very real threat of wildfires as a foregone conclusion, both during and outside of the traditional wildfire season. Websites like Living With Fire Tahoe have popped up, keeping year-round residents on alert and educating backcountry visitors on best preventative practices. But as aquatic resources dwindle, and forests are downed for residential creep, the tumult has struck back, impacting us humans, too. 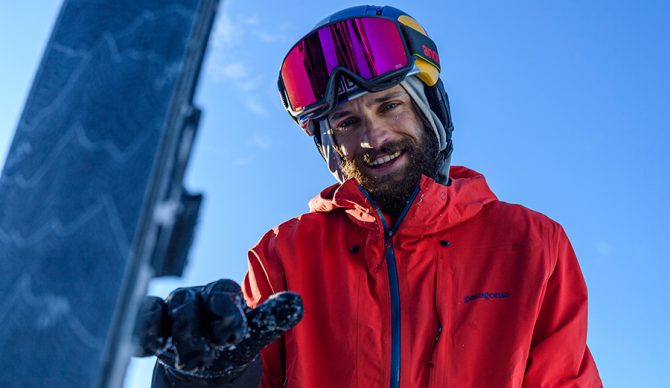 We can do more. Fredrik Marmsater //Red Bull Content Pool

No longer exclusive to rural regions, known urban informers like The Reno Gazette and the San Francisco Chronicle have online fire and smoke maps indicating realtime hot spots and air quality reports. “All of these little trends add up,” notes Russell. “This past year, for example, we got some pretty decent storms, but then they would all be followed by the northeastern winds that just rake the mountains of snow. So the high Alpine part of the peaks would be bare of snow in March, but then these middle elevations would have a decent snowpack and then there’s the obvious rising of temperatures, so it’s raining a higher amount than it used to. Now all of those little things that you’re picking up on, you start to think, ‘Wow, this is a pretty rough winter,’ you know? And how many rough winters can you take, really?” asks Russell, who’s career is dependent on the winter season.

It’s not just Russell counting on a decent snow dump. Beyond natural cycles crucial to Earth’s balance, resort workers, mountain villages, and equipment companies also rely on the regularity that is fast evaporating. As Russell wisely points out, “I’m concerned,” he says, “about the entire survival of these ski towns. From the restaurants to the gear shops..all these people are dependent on tourism and the winter…but more importantly, we want to have killer winters.”

Sustainable Slopes came about in 2000, offering everything from guidance to grants for participating mountain resorts. Since their genesis, Sustainable Slopes has a growing number of sustainably certified resorts, celebrated for their commitment to go beyond the basic refrain of recycling and reusing. Certified slopes are actively redesigning their buildings and snow equipment to make the best use of heating, transportation, waste management, and water consumption. They educate guests about the realities of climate change and encourage them to make small changes in their own lives.

“It’s a hard pill to swallow and professionally, that’s why I’ve aligned myself with brands that are on the front end of trying to do what they can for this climate crisis,” notes Russell. He highlights industry-wide examples, including Patagonia’s recent announcement to cut ties with Jackson Hole Mountain Resort as a means of boycotting owner Jay Kemmerer’s support of climate deniers despite the decades of overwhelming scientific evidence demonstrating global warming trends. “More or less, everyone is on the same page,” Russell says of his sponsors, “They’re taking necessary steps, the best they can. Like, for example, Red Bull connected me with you to chat about this today…They want their athletes to speak up and have a larger platform, to just scream at the top of your lungs.”

Environmental advocacy stretches beyond the snowboard industry. “I feel like surfers in general may be more environmentally conscious than the average skier, snowboarder or enthusiastic fan,” says Russell. “I think that’s because when you’re surfing, you’re in the ocean under your own power in the raw elements, 100 percent of the time, and you gain that deeper connection.”

To his point, surfing is just as environmentally reliant a sport as riding snow and, though the threats somewhat vary for the environment of the two, it is essentially the same threat. So surfers, too, have taken a stand.

Surfing has seen John John Florence get a green thumb, going farm to fork and eating local when possible; Kohl Christensen’s off the grid homestead is an enviable lifestyle; and Portugal’s Miguel Blanco has dropped a sponsor and picked up the camera to raise awareness. The WSL’s PURE campaign hopes to offset the inevitable Big Foot-sized carbon footprint inevitable with most events; and Arctic Foam is getting nuts – literally – experimenting with almond foams and algae as alternatives. From Vans to Volcom, spending your green on a green product is becoming the norm.

“You gotta put your money where your mouth is; you can vote with your dollars,” encourages Russell. Still, we can only change our own course of action. To compensate for the shortsighted among us, Russell drops some simple advice: “Luckily for me, the people that kind of follow what I do in the mountains are generally of the same mindset, so everyone is on board. But I think the main thing is people are looking for a tangible action, like, ‘What can I do to help?’ And it always boils down to pushing your local representatives. Grassroots campaigns are awesome, but it’s all about creating pressure for our elected officials to act favorably for the climate and to take these bold steps.”