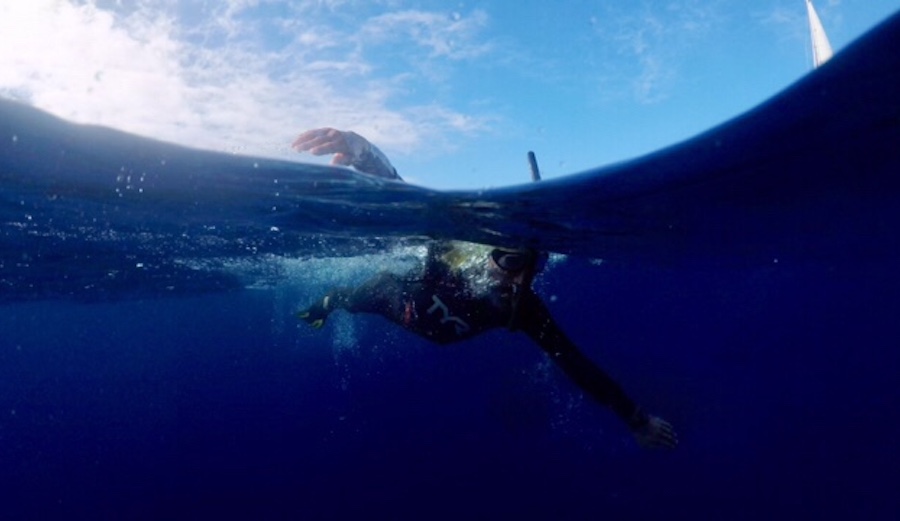 Ben Lecomte is a French swimmer attempting to be the first to swim across the Pacific. And he’s doing it to raise awareness about plastic pollution. Photo: benlecomte.com

Nearly twenty years to the day since embarking on a historic swim across the Atlantic, French swimmer Benoît Lecomte left Choshi, Japan back in June headed toward San Francisco. Already 136 days and over 1,400 nautical miles into what was originally planned to be a 180-day journey, Lecomte hopes to be the first man to successfully swim over 5,500 miles across the Pacific Ocean, and in the process, he’s raising awareness about plastic pollution.

Lecomte aptly calls the voyage “The Longest Swim.” And over the six-month crossing, the 51-year-old will log close to eight hours of swimming per day.

The trip hasn’t been without its setbacks. Back in August, two typhoons caused Lecomte and his crew to head back to port in Japan until it was safe to resume the swim. And on Sunday, dinghy issues caused a slight delay. Still, Lecomte is determined to stay the course.

Along the way, Lecomte’s encountered all kinds of wildlife and reportedly been stung on the nose by jellyfish, but the most staggering experience of all has been how much plastic debris he and his team are seeing and collecting.

“We see two pieces of plastic on the surface every five minutes,” Lecomte told Business Insider in a recent interview.

The crossing is doubling as a citizen science expedition. “Under the direction of researchers from 12 scientific institutions including NASA and Woods Hole Oceanographic Institution, the crew will perform oceanic and medical research throughout the journey, marking the first time such scientific work will be conducted by the general public,” explains Lecomte’s website.

The team estimates they’re capturing four pieces of microplastic every minute with special nets as they escort Lecomte in the open ocean. In a September 11 logbook update, for instance, Lecomte said he and the crew collected 602 pieces of plastic in a single day – he says that’s been the most jarring part of the whole experience.

“What is very surprising to me and everyone on the boat is the amount of plastic that we found, and the fact that we found it everywhere,” he told Business Insider.

That Lecomte would encounter plastic so commonly in the middle of the ocean is disturbing, to say the least, but it’s also illustrative of how ocean currents carry trash and debris to the ocean’s furthest reaches. It’s a phenomenon that’s resulted in an area called the Great Pacific Garbage Patch that’s comprised of one million square miles of floating waste.

Seeing the effects of plastic pollution on ocean health first hand, Lecomte is using the media attention around his historic swim to advocate against single-use plastics for a better future. “Every time that I am in the water, it’s another opportunity for me to get the attention of, or inspire people to maybe limit their use of single-use plastic,” he said.