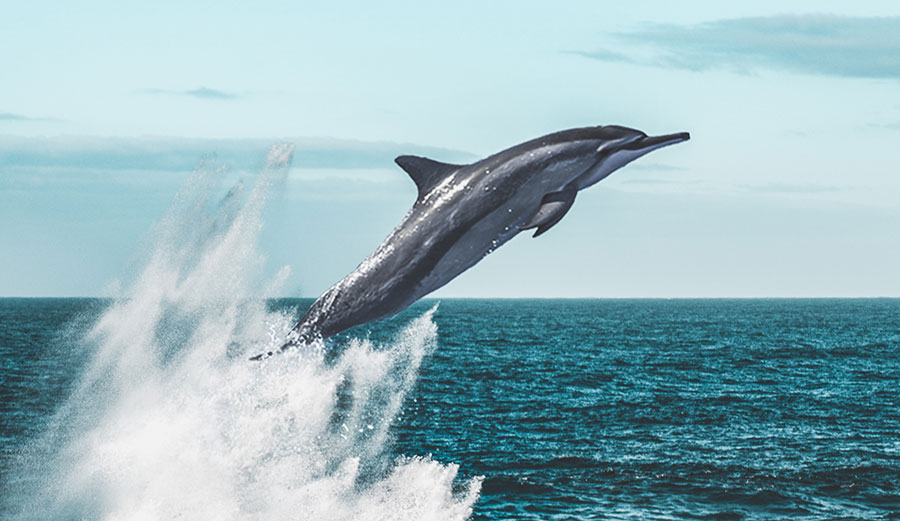 As of October 28, you gotta leave these creatures alone. Photo: Pagie Page/Unsplash

If you’ve ever been on a boat in Hawaii, you might’ve been lucky enough to see Hawaiian spinner dolphins leaping out of the water. They like to play, it seems, and a boat’s wake makes a good playground. It can be exceedingly tempting to swim with them, but as of October 28, that’s a no-go.

The National Oceanic and Atmospheric Administration (NOAA) announced a ban on “swimming with, approaching, or remaining within 50 yards of a Hawaiian spinner dolphin (for persons, vessels, and objects) including approach by interception, or placing a vessel, person, or other object in the path of a Hawaiian spinner dolphin so that the dolphin approaches within 50 yards of the vessel, person, or object (e.g., ‘leapfrogging’), and applies within two nautical miles from shore of the main Hawaiian Islands (MHI) and in designated waters bounded by the islands of Lāna‘i, Maui, and Kahoʻolawe.”

Dolphins need a break every now and then, just like every other animal on Earth. And our interference, as harmless in intent as it may be, can be disruptive.

“Like all animals, Hawaiian spinner dolphins need rest,” NOAA explained in a news release. “Spinner dolphins are nocturnal feeders that perform critical resting behaviors during the day while in safe, nearshore areas. But for decades, spinner dolphins in Hawaiʻi have experienced intense viewing pressure from commercial and recreational wildlife viewers seeking close encounters with the charismatic marine mammals.”

The term “vessel” in the NOAA statement is wide-reaching and includes all boats, canoes, stand-up paddleboards, and even drones. According to the NOAA, it’s an important measure to preserve the health of the dolphins.

“Chronic exposure to human activities in their daytime essential habitat may place resident populations of spinner dolphins at risk through habitat displacement or reduced health,” they explained. “Even though spinner dolphins can simply ‘swim away’ […] doing so interrupts their rest.”

In one example, the NOAA looked at spinner dolphins off the Kona Coast of the Big Island. The study found that the spinner dolphin population there is exposed to human tourist activities up to 82 percent of daylight hours. The average interval between tourist interactions was only ten minutes. In 2014, up to 13 tour boats were observed “jockeying for position on a single dolphin group, with up to 60 snorkelers in the water.”

The near-constant interaction over the years has prompted members of the public, the Hawaii Department of Land and Natural Resources (DLNR) and the U.S. Marine Mammal Commission (MMC), representatives of the Native Hawaiian community, scientific researchers, wildlife conservation organizations, public display organizations, and even some commercial tour operators to sound the alarm.

There are however, a few exceptions to the prohibition, mostly pertaining to accidental interactions — as long as the proper steps are taken to move away from the dolphins:

Strangely enough, most interactions with spinner dolphins have been prohibited since 1972, when the Marine Mammal Protection Act came into effect. That, however, hasn’t stopped anyone — the dolphins are one of the most popular sights to see for visitors to the islands. The NOAA has decided that enough is enough and that further measures were necessary.

“Coping with these space invasions puts the dolphins into a permanent state of vigilance,” the NOAA explained, “and interrupts their ability to hunt and nurture their young.”