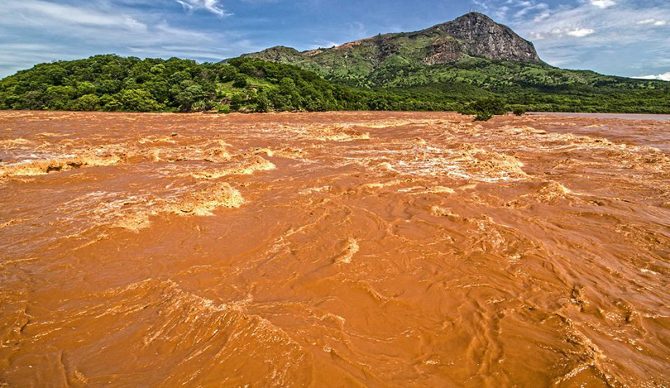 What could possibly be worse than one socio-environmental catastrophe? Two of them.

On November 5, 2015, the Fundão dam, located in the sub-district of Bento Rodrigues, 35 km from the center of the Brazilian municipality of Mariana, Minas Gerais, ruptured. 60 million cubic meters of iron ore tailings were leaked from the Samarco-operated mining complex and traveled 55 km from the Gualaxo do Norte River and another 22 km from the Carmo River to the Doce River. In total, the mud traveled 663 km to find the sea.

It’s been characterized by experts as the country’s largest environmental disaster, altering the ecosystems along the Rio Doce basin tremendously in addition to killing 19 people and affecting more than 23 thousand families.

Recently, the relationship between the yellow fever outbreak and this disaster have made their way into the mainstream media’s narrative, just as biologist and environmentalist Augusto Ruschi predicted two years ago. According to data from the Ministry of Health, January 2017 to January 2018 registered as many cases as the previous 30 years.

Two years after the rupture of the dam, the system was altered for the worse with a relaxation of mining codes. What happened was not an accident, but a crime committed by miners and a complicit government. The initial tragedy should have served as a lesson in what to avoid. Instead, it only exposed the most perverse face and inhuman logic applied by companies like Vale/Samarco and BHP Billiton. Much of the media coverage hasn’t helped either. According to the National Water Agency’s 2016 Dam Safety Report, 85% of Brazil’s dams are not properly inspected. There are more than 600 mining companies in Minas Gerais and more than 60 dams at high risk of landslides. Some have argued that the Fundão dam’s collapse in 2015 was preventable, but even with so many irregularities and the imminent risk of collapse, the company has been able to renew its licenses. In 2013, an environmental report raised concerns over increasing the dam’s height and recommended monitoring, a contingency plan, and a dam break analysis years before it eventually happened. No safety measures have been taken simply because it is much cheaper to pay an eventual fine than it is to invest in accident prevention. Disregard for the life of others is so great that there wasn’t even a siren alerting the nearby public in the event of a breach of the dam.

Many of these problems begin with corporations financing electoral campaigns, electing representatives of their interests, infiltrating political spheres, and directing and approving their megalomaniac projects disguised as altruistic — always in the name of progress and, of course, their bank accounts. Today, heavy metals are causing degenerative diseases and will continue to affect the environment for decades and maybe even centuries (the pharmaceutical industry should already be counting its future customers). In this instance, the chemical soup ended the life of a river, which has created an environment favorable to the outbreak of yellow fever spreading to other regions of the country without fish and frogs to eat mosquito larvae. Monkeys are being decimated by fever and uninformed people who kill them, thinking they are transmitters of viruses (they are not). Meanwhile, there is no effective procedure to inform and educate a public that waits in long queues for vaccinations. The carcinogenic mud deposited in the bed and the river banks flows to the ocean, as shown by satellite monitoring. Sea fish, cetaceans, and corals are contaminated from Bahia to São Paulo, and the affected area increases every day in the South Atlantic.

Prosecutors of the Republic and Promoters of Justice have allied and banned a Foundation called Getúlio Vargas (FGV) from measuring the damage caused by the 2015 tragedy, as it was considered a conflict of interest. Companhia Vale, which is the parent company of Samarco, occupies a vacancy in the FGV. In the book The Corporation: The Pathological Pursuit of Profit and Power, Canadian authors Mark Achabar, Jenifer Abbott, and Joel Bakan (2003) present a history of the growth of large corporations in the world, addressing social and environmental issues like the use of products harmful to the biosphere, human and animal health, destruction of their natural habitat, toxic waste, pollution, synthetic chemicals, industrialized farms, experiments, application of artificial hormones to increase animal production capacity, forest devastation, CO2 emissions, nuclear waste, economic and political issues, as well as corporate responsibility in the contemporary world. In it, more than 40 testimonies were heard from top executives of multinationals, stock exchange operators, university professors, historians, filmmakers, and even business spies. It raises the question: if corporations were people, what kind of people would they be? They often act as if they do not have a soul or a moral being, and they certainly don’t have a body to be restrained and imprisoned. They have no commitment to human life, or to animals or the environment. They only exist to profit. They lie and sponsor lies to build the image of well-meaning benefactors, hiding political manipulation and environmental destruction.

For example, the poisoning of “Watu,” which means river in the Krenak language, completely transformed the lives of the 126 indigenous families who lived from agriculture, hunting, and fishing. The Krenak Indians lost their identity, are affected by alcoholism, depression, and now buy their food solely in supermarkets. They are prevented from performing their rituals and have to move away from the sacred river to get the obá seeds, necessary to make handicrafts. Leonir Boka is chief of the village Atorã, says “There’s no house, no money or anything that pays what they did with the river, what they did with our people. If it was to choose anything in this world, we wanted the river back.”

Like people, companies may experience symptoms of psychopathy, such as disregard for others’ feelings; inability to maintain lasting relationships; repeated lies and cheating for profit; inability to follow social norms of conduct within the law. Robert Hare, the current board member of the FBI’s Serial Killers Research Center, has developed The Psychopathy Checklist. It’s a list that can help detect risk behaviors in individuals. Ironically, here are some similar traits assumed by criminal corporations: feelings of personal importance; manipulation and blackmail; attraction for power; absence of remorse or guilt; superficial emotions; lack of empathy with others; parasite lifestyle; precarious behavioral controls; impulsivity; irresponsibility; inability to take responsibility for their actions. So what if we started viewing and treating large entities with this type of behavior the same way we do people?

Corporations ruled by this pattern of reasoning and behavior should be boycotted and punished, but they often are not.