As gun violence in America has continued unabated I, like many reasonable people, have grown to believe nothing would change. Then, on February 14, 2018, 17 students and staff at Marjory Stoneman Douglas High School were killed by a 19-year-old with a legalized military assault rifle. It was just one of a string of mass shootings in Florida and across the nation. Somehow, things did begin to change as many of the surviving students refused to accept the “thoughts and prayers” of politicians and instead demanded action. It’s a story that has led to nationwide student walkouts, demonstrations, and lobbying at statehouses and in D.C., most recently culminating in the March 24 nationwide March for Our Lives.

It seems only right that a high school named after an environmental writer and activist who helped save the Everglades “River of Grass” through her individual efforts and grassroots organizing should spawn a generation that will now confront gun violence in America in the same manner. As she once stated, “Be a nuisance where it counts: Do your part to inform and stimulate the public to join your action…never give up.”

The March confronted the existential short-term survival threat posed by gun violence in America. Now, on June 9, 2018, thousands of people who love, get their stoke from, and work with the ocean will confront the existential survival threat to all life on our blue planet posed by the rapid decline of the ocean and linked climate system. Wearing blue and marching for the ocean in D.C. and around the world that day could prove a turning point in bringing critical issues into the public sphere where they can be debated and acted upon.

When I was covering a revolution in Central America, the young people risking their live at first talked to reporters about getting help from the rebels in the hills. But a few weeks later they’d stopped talking about “the rebels” and started talking about “we rebels.” Shortly after that, the dictator and his army were defeated. When the March for the Ocean becomes Our March for the Ocean, our victory – a healthy ocean and clean water for all – will also become a reality.

And don’t doubt my historic analogy to a war. The avarice, greed, and ignorance that’s impacting our ocean today – the source of half our oxygen (from plankton that is in decline) – the driver of climate and weather (that’s turning more extreme) – poses at least the same scale of global threat as Fascism and the nuclear balance of terror held in the last century. Unfortunately, that threat is now being expanded by an administration and Congress in Washington that views our public seas and connected fresh waters as little more than a gas station – with Department of Interior plans to open up over 90 percent of U.S. waters to oil drilling – or a place to dump mining waste and other polluted garbage.

In defending the salty crucible of life on our planet we are also defending our blue economy and equity as the poor suffer these environmental insults disproportionately be it from bleached and dying reefs in the Pacific, eroding native villages in Alaska or extreme storms in Houston, Florida, Puerto Rico and the Virgin Islands.

The question is do we have the power to reverse course? Potentially, yes. Our more than the 100 March partner groups to date including major aquariums, environmental groups like Surfrider and Sierra Club, dive groups such as PADI an DAN, and commercial fishing and aquaculture companies regularly reach more than 24 million people, or about 11 percent of the U.S. voter population.

Plus, our March is a chance to expand the power of many individual efforts to stop offshore oil drilling and spilling, end the plastic pollution that’s killing wildlife and poisoning our seas and restore the natural resiliency that our coasts, communities, and economies depend on in the face of rising seas and a destabilized climate.

As they say, a rising tide lifts all boats. Or as we say, ‘The Ocean is Rising and So Are We.’ 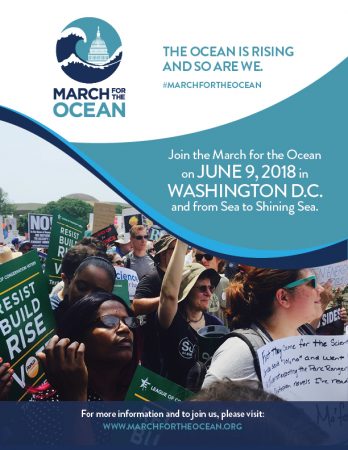