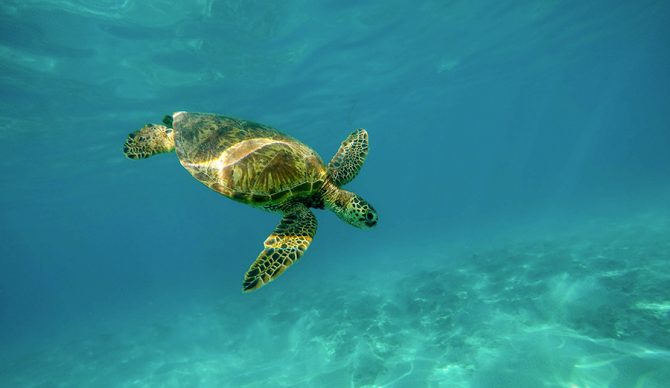 The animal at the center of the abuse. Photo: Jeremy Bishop//Unsplash

COVID. Turtle traffic. With the seasonal lack of swell to bond over, the two issues are dominating conversations on the North Shore and greater Oahu. But recently the watchful eye of social media has elevated the concern for Laniakea’s turtles from Foodland checkout-line banter to state-wide media coverage – and this time traffic along Kam Highway is the least of the island’s worries.

A perennial favorite among surfers, especially on a north swell, Laniakea, or Lani’s, is also a choice destination for Chelonia mydas – green sea turtles in need of a snack and some sun. The turtles have only recently moved from the endangered species list to the threatened species list, and frequent the wide cove’s protected waters, nibbling on the plentiful limu (seaweed) in the shallows before scooting to the sand to bask in the sun. Turtle spotting at Lani’s is a guarantee, and the local secret has made its way onto every must-do list for Oahu tourists.

But recent social media posts have ignited outrage and protests – and brought to light a larger issue of animal rights.

Commuters and residents have been pushed to their limits by the frequency of these posts depicting uneducated, ill-informed carelessness on the part of several of the beach’s visitors. Many are also fed up with the relentless traffic as curious tourists make their way to the beach to snap a turtle pic, crossing it off Oahu’s vacation bingo. Essentially, those photos showing people touching, picking up, and even laying on these wild animals, have been the proverbial straw that broke the camel’s back, pushing residents into action.

The law-breakers in these pictures are blatantly ignoring the clearly posted signs on the beach about animal treatment, and are evidence of an incredible lack of common sense (and a larger problem). These images are often reposted by the local news in an effort to track down and fine the violators, an effort supported by the Department of Land Natural Resources (DLNR) and National Oceanic and Atmospheric Administration (NOAA). 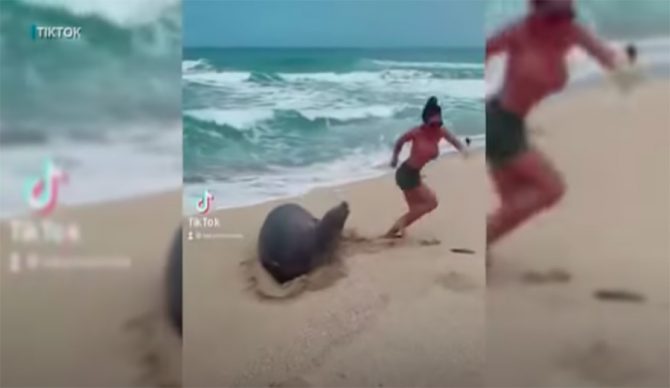 Hawaii recently issued a warning that it will prosecute people who harass wildlife. Photo: Screenshot

But it should not have to come to that. Nature – endangered, threatened, or not – is not the petting zoo people are treating it as.

Oahu has recently had to increase the “Honu Guardians” patrolling Lani’s. The “Guardians” are part of a government-backed, NOAA-supported program implemented in 2005 resulting in the presence of volunteers and signage on the beach, educating sight-seers, collecting data on the animals, and keeping a watchful eye on the turtles.

The handsy abuse isn’t limited to turtles – other endangered species endemic to the islands have also been victimized:

While checking on the nest built by a threatened Laysan Albatross bird, a small group of high school volunteers were harassed and threatened before being chased by wedge-wielding golfers (grown men), who then turned their aggression to the inconveniently nesting bird, chasing it away, too. Reports of these birds getting abused over the years have resulted in jail time for guilty teens and adults alike.

Abuse of Hawaiian Monk Seals or Neomonachus schauinslandi, have also raised concerns, and in 2018 an Alabama visitor was fined $1,500 for touching one of just 1,400 remaining in the world. Thanks to an ongoing effort to monitor social media posts, NOAA identified the man, and promptly sought payment. Though a simple touch may not seem invasive, these wild animals need their natural space to thrive, and past reports of abuse have included the shooting of a pregnant seal in 2009 and the beating of another for which a man received jail time. The NOAA website clearly lays down the law with regards to human-animal interactions:

“Hawaiian monk seals and all species of sea turtles in U.S. waters are listed as either threatened or endangered under the Endangered Species Act, or ESA. Hawaiian monk seals, along with all dolphins and whales, are also protected under the Marine Mammal Protection Act (MMPA). Actions that may harass, harm, pursue, capture, injure, or kill the animals may be punishable through fines or jail time.”

The desire to see these endangered species is completely understandable and the ease in which one can do so in Hawaii is much of the magical allure of the islands. But overcrowding of these destinations is also a growing concern.

Celebrated for its wide variety of fish species and colorful corals, Hanauma Bay on the southeastern side of Oahu is a must see for lovers of marine life. Snorkelers and swimmers flock to the marine sanctuary, with daily counts peaking in the 1980s at 10,000 guests a day. In March 2020, COVID shut the beach down allowing only University of Hawaii marine researchers into its waters. In an article in Hawaii’s Star Advertiser, UH scientists reported anecdotal and scientific data regarding the negative impact of humans on the rare marine fish – and the startling revitalization of ocean plant and animal life, as well as water quality improvements from the absence of crowds during the pandemic.

Overcrowding and pollution has also been a growing issue at the popular North Shore destination, Shark’s Cove, a marine sanctuary and snorkeler’s delight. But water runoff from the increase of cars, cooking oil from nearby restaurants, and bathroom facilities has resulted in a neighborhood lawsuit. The neighborhood watch group is also concerned with coral-harming sunscreen, reef trampling, and the general abuse of the same natural world swimmers are there to see.

“The lockdown from the pandemic showed us something at Sharks’s Cove that observers and scientists also saw around the globe,” Marvin Heskett, a water quality chemist and North Shore resident recently told me. “Without the crowds on the beach and in the water, life in the tide pools and water quality came bounding back in ways few of us had ever seen.”

The abuse of animals and overcrowding of these destinations is not unique to Hawaii. But the issue has been raising red flags with more frequency lately and has officials scrambling as the islands wear thin from the over-saturation of enthusiastic vacationers. But, in my view, the task of keeping Hawaii’s wildlife safe is a simple one, and shouldn’t even need to be voiced: practice aloha and common sense.