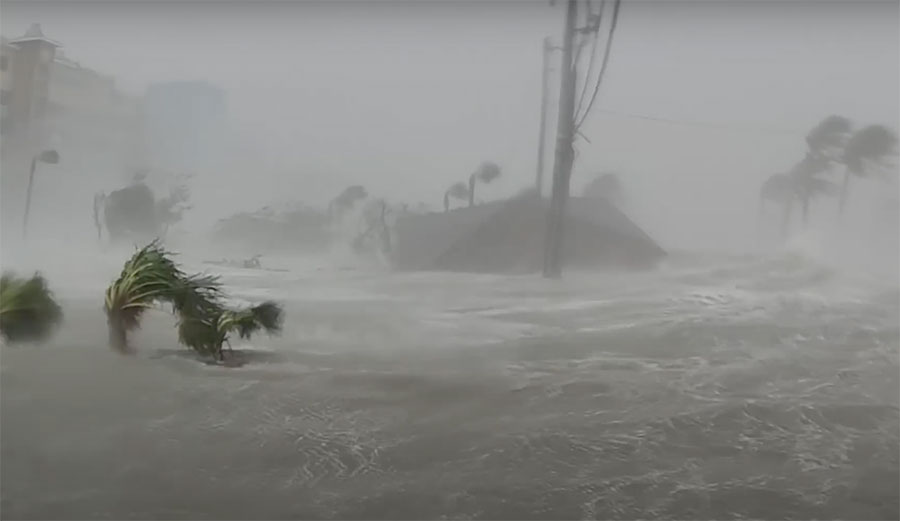 A screenshot from a video shared by the Washington Post on Youtube shows just how intense Hurricane Ian was in Fort Myers, Florida. Image: Screenshot//YouTube

After devastating parts of Florida and South Carolina, Post-Tropical Cyclone Ian is pushing its way north. While it has been downgraded from hurricane to its new designation, it will likely still wreak more havoc as heavy rains continue.

As of Saturday, 34 people are dead in Florida. Power outages are widespread, and the destruction is nearly inconceivable. According to the National Hurricane Center, Ian’s sustained windspeeds have fallen to a maximum of 35 mph. The storm is expected to burn itself out by tonight, as it heads over Virginia.

Over a million homes and business are without power in Florida, while some 62,000 South Carolina customers are in the dark. One video from Fort Myers showed just how intense the storm was on September 29.

Cory Lopez lives in Daytona Beach, Florida. While Hurricane Ian didn’t make landfall there, it bore the brunt of the storm. The Sunglow pier has all but collapsed. Roads are flooded, homes and businesses turned to roofless piles of rubble.

“We live in Daytona Beach Shores,” Lopez said. “We got hit hard with over 24 hours of wind and 36 hours of heavy rain.”

Cory and his family made the decision not to evacuate, based on early predictions that Ian would make landfall farther away from their home.

“The original call for my house was not that bad,” he explained. Then the track changed as the storm was making landfall and we ended up being in a bad spot. My neighbor who has lived here for over 50 years said it was the worst he has seen.”

Once Ian had moved on, Lopez explored the place he calls home. What he saw was shocking.

“I drove around town today and so many neighborhoods are completely underwater,” he went on. “Lots of roofs ripped or collapsed, at least two piers I know of have been broken. It’s going to be some time to get this place back together. I feel very fortunate that my house handled rather well with only minor damage and my heart goes out to everyone who lost so much.”

To help the people affected by Ian, you can donate to the Red Cross here.