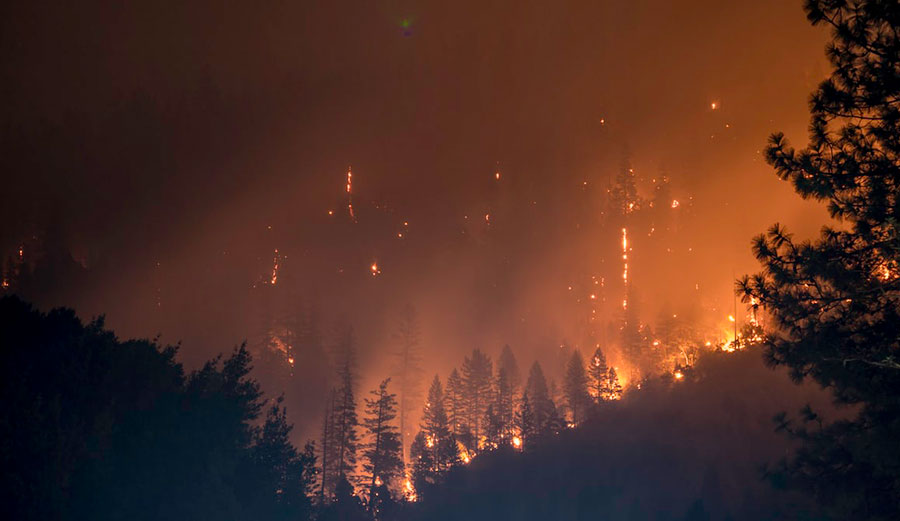 The IPCC report on what the future holds is bleak. Very bleak. Photo: Matt Howard/Unsplash

The Intergovernmental Panel on Climate Change (IPCC) published a new report Monday, and it is… bad. Like, really bad. So bad, in fact, that the UN chief called it a “code red for humanity.”

The IPCC is a body made up of the world’s leading climate experts. Formed back in 1988, its reason for being is to assess and create reports on the environment, specifically climate. Its first report came out in 1990, and its findings were the reason behind the UN Framework Convention on Climate Change, which eventually led to the 2015 Paris Agreement. It releases a report every seven years, give or take a few months here and there, and they are extraordinarily comprehensive. Thousands of pages long and using what the BBC called “the full spectrum of human knowledge of the climate system,” each report is summarized into a handful of the most important messages held within, hopefully to be used by governments to adjust for the coming future.

As was expected, the most recent report points to catastrophic problems, many of which are already unavoidable. Enormous changes in our climate are irreversible, but if — and that’s a big if, given the current state of the world — we make massive cuts in greenhouse gas emissions over the next ten years things could improve.

“It is a statement of fact, we cannot be any more certain; it is unequivocal and indisputable that humans are warming the planet,” Petteri Taalas, Secretary-General of the World Meteorological Organization, told the BBC. “By using sports terms, one could say the atmosphere has been exposed to doping, which means we have begun observing extremes more often than before.”

One only needs to look around to see the effects of our changing climate. Wildfires burning down entire towns. Severe flooding, heat waves shattering records, hurricanes stronger than we’ve ever seen — it’s all happening in front of our eyes, but far too many are blindfolded by disinformation and mistrust. “Climate change is now causing amplified weather extremes of the sort we’ve been witnessing this summer – droughts, heatwaves, wildfires, floods, superstorms,” Michael Mann, a professor of atmospheric science at Pennsylvania State University, told The Guardian. “The impacts of climate change are no longer subtle. We see them playing out in real time in the form of these unprecedented extreme weather disasters.”

Unfortunately, reality is not swayed by the opinions of climate change skeptics. The human race, divided as we are, needs to find a way to fix the problems we’ve created in our struggle for comfort and cash, and the only way we’re going to do it is by working together.  “If we combine forces now, we can avert climate catastrophe,” said UN Secretary General António Guterres. “But, as today’s report makes clear, there is no time for delay and no room for excuses.”

The report, which is the first major review of climate change since the 2013 version, was released just a few short months before the upcoming key climate summit, COP26, held in Glasgow, Scotland. With any luck, the leaders at the summit will realize that the sobering information needs to be acted on, and acted on fast.

The IPCC’s document says “it is unequivocal that human influence has warmed the atmosphere, oceans and land.” The report’s authors found that global surface temperatures have risen faster since 1970 than at any other 50-year period over the last 2,000 years. This warming is affecting weather patterns all over the world, creating climate extremes that we’re simply not prepared for.

According to the report, global surface temperature was 1.09 degrees celsius (C) higher in the decade between 2011-2020 than between 1850-1900. Which may not seem like a lot — but when it comes to the nature’s delicate balance, that single degree has the potential to cause exponentially bigger issues. The last five years have been the overall hottest since 1850 and the rate of sea level rise has tripled when compared with the years between 1901 and 1971.

The report went on to warn that it is “virtually certain that heatwaves will become more intense and more frequent, while winter cold snaps will become less frequent and less severe. Since the 1990s, glaciers around the world have retreated at alarming rates and the amount of Arctic sea-ice is decreasing every day. The IPCC found that it is “very likely” that human influence is the main factor causing those problems in particular. “The consequences will continue to get worse for every bit of warming,” said Professor Ed Hawkins, from the University of Reading, United Kingdom, who is one of the report’s authors. “And for many of these consequences, there’s no going back.”

In the coming decades, the oceans will continue to warm and become more acidic. Reefs will die. Glaciers will continue to melt. We’ve hit a tipping point, and there’s no turning back. In 2015, nearly every nation in the world made a pact under the 2015 Paris Agreement. The goal was to keep the steady rise in global temperature to a minimum. Under two degrees celsius above pre-industrial levels, to be exact, with a focus on keeping them under 1.5 C if possible. But now it’s apparent that, unless drastic cuts in emissions are put into place, both of those goals won’t be met by the end of the century. The authors of the IPCC report, in fact, found that “1.5C will be reached by 2040 in all scenarios.”

“We will hit one-and-a-half degrees in individual years much earlier. We already hit it in two months during the El Niño in 2016,” said Prof Malte Meinshausen, an IPCC author from the University of Melbourne in Australia. “The new report’s best estimate is the middle of 2034, but the uncertainty is huge and ranges between now and never.”

If that 1.5C threshold is broken, things are going to get pretty miserable for a whole lot of people. “We will see even more intense and more frequent heatwaves,” said the University of Oxford’s Dr. Friederike Otto, who was also an author of the report. “And we will also see an increase in heavy rainfall events on a global scale, and also increases in some types of droughts in some regions of the world.”

In its entirety, the report shows very clearly that we’re already experiencing the consequences of our actions. It also found that, if we continue down the road we’re on, “we will experience further and concurrent changes that increase with every additional beat of warming.”

There is, however, still a glimmer of hope. As mentioned earlier, many of the report’s finding are irreversible, but researchers are hopeful that cutting global emissions in half over the next decade and reaching a net zero by 2050 will halt the rising temperatures and all the bad things that come with it. Net zero is a lofty goal, which requires an enormous societal shift. Reducing greenhouse gasses to as near to zero as possible, moving to clean tech, and using trees and carbon capture to slurp up our excess could — could — work. And for a while, researchers were worried that we were already too far gone.

What awaits us in the future has never been more clear. All that remains is to wait and see if the powers that be will listen to science, facts, and reason. But given our track record, the chances of that happening might not be all that good. Unless, of course, we demand it.