Japanese Whalers Report That They Killed 333 Whales for “Research” Purposes 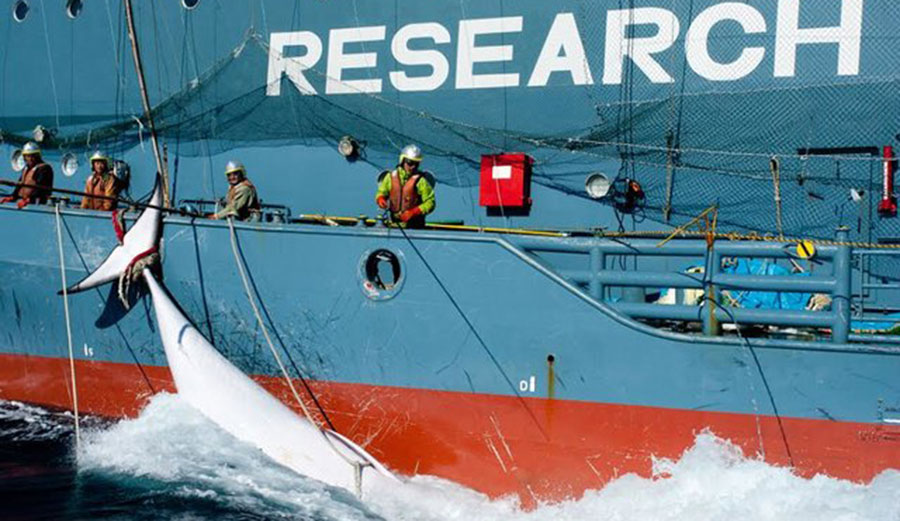 A harpooned whale hanging off the side of the Nisshin Maru. Image: Glenn Lockitch/Sea Shepherd

In a recent report the Japanese government handed over to the International Whaling Commission, they admitted something bad: Japanese whalers killed 333 whales on a single trip to the Southern Ocean—and 122 of them were pregnant.

It’s been illegal since the early ’80s to hunt whales, but a few countries just keep on keeping on. Back in the day, we killed whales for a whole whack of stuff, like lamp oil, perfume, soap, and, depending on the culture, meat. Then the future happened and in a rare moment of governmental intelligence, the powers-that-be were like, “oh shit, we don’t actually need to be killing these things, so let’s stop doing it.” Of course, as with almost every law, there are a few loopholes in the whale slaughtering laws, one in particular. If you’re killing a whale for research purposes—which is generally for the good of the species as a whole—you’re in the clear. But then you have a whale’s worth of meat just sitting around that someone could eat, so you sell it.

Some countries, like Norway and Japan, blatantly flaunt the international whaling laws. “At HSI [Humane Society International] we deplore Japan’s ongoing and relentless killing of whales for profit,” Mark Simmonds, senior marine scientist at HSI, told The Dodo. “This cruelty continues despite a global ban on commercial whaling agreed [to] in 1982 and still in force. Japan’s claims that its takes are for scientific research provide a thin camouflage for a large-scale commercial activity that continues annually in the North Pacific as well as in the Southern Ocean. The latest news of [a] large number of pregnant females being killed only deepens our concerns.”

This most recent report isn’t at all surprising, and it’s far from the first time. In 2014, after Japan reported another inordinate amount of dead whales for “research purposes”, the International Court of Justice (ICJ) ordered the country to halt its whaling program because they failed to prove exactly what that research was. By 2016, they were right back on the harpoons, or however it is you kill a whale now. “I was angry but not surprised,” Gary Stokes, Southeast Asia director of Sea Shepherd Global, a group that actively opposes the Japanese whale hunts, told The Dodo about the program’s resurrection. “I felt helpless.”

Captain Paul Watson, the outspoken founder of Sea Shepherd, level some weighty accusations at Japan. “Japan deliberately targets pregnant minke whales,” Watson told The Dodo. “The fetuses are a large part of their ‘research.’ The objective of their efforts is to gather data to support a return to full-scale commercial whaling in the Southern Ocean. These operations are in defiance of the verdict of the International Court of Justice and the global moratorium on commercial whaling as ruled by the International Whaling Commission.”