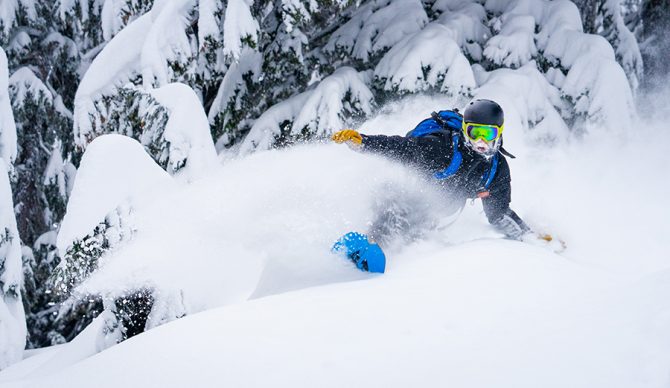 Somewhere in the Cascade backcountry could be good again. Photo: Ben Kitching//Unsplash

Meteorologists say La Niña will complete a rare “triple dip” this winter when it sweeps through the Northern Hemisphere for the third year in a row. This would be the third triple dip in the 73 years humans have recorded it.

So many powderheads are likely asking, “what will it mean for my ski season?” A straightforward answer does not exist.

Here’s how a La Niña winter is supposed to shake out, based on conventional wisdom. If you’re up north, like in Whistler, B.C., or the upper midwest, you’re probably looking at a pretty cold, wet winter. If you’re down south, get ready for dry times. And if you’re somewhere in the middle, such as Colorado, the outlook varies widely.

The climate pattern called La Niña occurs when water in the Pacific Ocean gets colder due to trade wind conditions. It works like this: the “trade winds” originate from high- and low-pressure zones in the Pacific along the equator. Not only do the prevailing winds move air masses, but they also push water around.

Stronger trade winds push more water near the ocean westward, away from the U.S. Pacific coast. Then, colder, deep-ocean water surfaces to replace it. That upwelling cold water pushes the jet stream that more or less cuts North America in half farther north.

Result: typically, dry or drought conditions in the southern U.S. along with moderately warm temperatures, and heavy precipitation in the colder-than-normal Pacific Northwest and Canada.

It’s important to remember that trying to predict snow conditions on a given mountain based on a weather pattern that’s much bigger than a continent and can only be forecasted roughly is a marginal proposition.

Last November, La Niña dumped on British Columbia, flooding Vancouver, and many outlying areas and causing substantial damage. At resorts like Whistler-Blackcomb and Revelstoke, that precipitation fell as snow — a lot of it. Whistler received 418 inches and Revelstoke got 329, according to OnTheSnow, and both those numbers were well above average.

If you’re in eastern Canada, though, you might not have as much luck. Mont Tremblant and Mont Sutton (both near Montreal, Quebec) got more or less average powder at 173 inches and 118.

Things get a little more complicated in the western U.S., where the jet stream and the cold Pacific Ocean water begin to converge. Depending on your area in Colorado, La Niña winter weather can vary. And where the mountains are most dense, predicting conditions at all based on a broad pattern like La Niña becomes a challenge.

Per the Summit Daily, the pattern tends to bisect Colorado: the northern half looks wetter and colder, and the southern half tends to stay drier and warmer. But that only applies loosely in places like Summit County, home to most of the state’s headliner resorts. Breckenridge, Arapahoe Basin, and Keystone all saw below-average snowfall last season, while Aspen Snowmass got buried.

A similar effect tends to persist through Utah, northern California and the Lake Tahoe area, and into the Pacific Northwest. There were definitely some weird tendencies last year. Utah, Idaho, Montana and parts of Washington saw multiple feet of snow in late April (after most resorts close) and into May. That came after a dry spell from December through March that left most every snow aficionado in the region grumpy and perplexed.

Winter conditions on the mountain, as always, can vary strongly and precipitously. La Niña could be here to stay for the winter but what it might mean for your local mountain or your travel is (literally) up in the air.