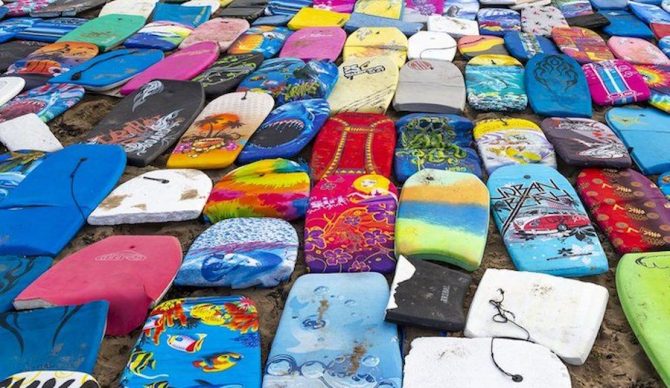 Maui isn’t the only place with such a problem. According to a Keep Britain Tidy report, over 16,000 cheap polystyrene bodyboards are discarded on UK beaches annually. Photo: Ocean Recovery Project

There are bodyboards that serious boogie boarders use to surf. And then there are the cheaply made bodyboards found in tourist shops. They’re constructed of thin pieces of polystyrene wrapped in a colorful cloth decal with a nylon cord for a wrist-strap, usually sold for $10-15. They’re generally only good for one or two sessions and have become a story at beach destinations across the world, with families on vacation buying one, two, or three at a time, only to have them end up broken in half and stacked next to the beach garbage can by the end of the day.

In a radical move to reduce such waste, Maui County, Hawaii is looking to enact a ban on the sale or rental of the cheap polystyrene boards, which they are describing as “disposable” or “single-use” bodyboards.

“I could just put a fist through (them),” council member Tamara Paltin, who introduced the legislation, recently told other members of the Maui County Council. “The little wrist strap really wouldn’t do anything for you in any kind of real surf.” Paltin, a former Ocean Safety Lieutenant, described how she and her team members would, “find all of these disposable polystyrene boogies in half on the beach and we’d go and pick them up and you couldn’t really throw them away because the rubbish can was overflowing with boogie boards.”

“They break up into a million tiny little balls that are easily ingested by our marine life and eventually into us because there are fish that are eating these little pieces of plastic,” said Maui Council member Kelly King. Maui Mayor Michael Victorino supports the ordinance as well, saying the council needs to be specific about the type of bodyboards which are being banned for it to work.

In a similar initiative that has been running in the U.K., environmental group Plastic Free North Devon is seeking a similar ban of the “disposable” bodyboards in its region. The group cited a Keep Britain Tidy report, stating that “over 16,000 cheap polystyrene bodyboards are discarded on UK beaches annually.” In the video above from March of this year, big-wave surfer Andrew Cotton shares his support for the initiative.

“Everyone is waking up and changing their usage of single-use plastic bags and straws, so why shouldn’t single-use bodyboards be the same?” Cotton said. “The amount of bodyboards collected on the beaches this summer is insane so it’s definitely time to educate people and change our habits.”