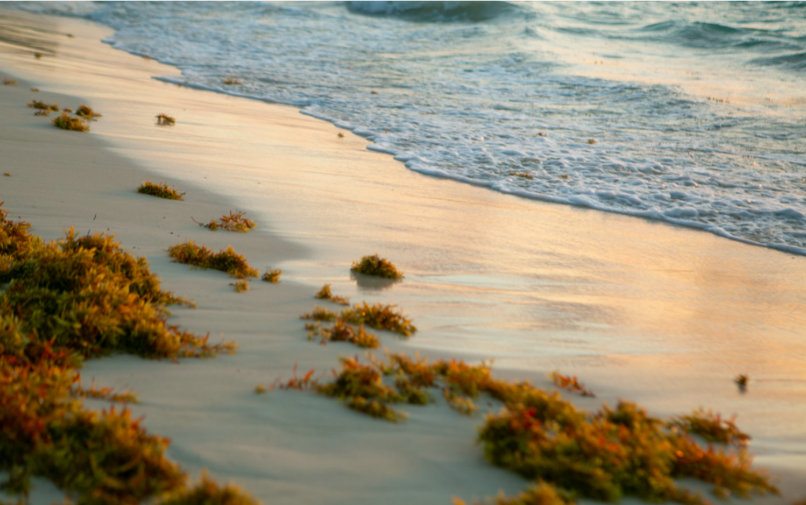 Mexico’s Caribbean coast is home to picturesque white sand beaches, swaying palms, and warm weather year round, making it a magnet for tourists. Mexico took a hard hit in the tourism department as a result of COVID-19 and only recently has been nearing its pre-pandemic numbers — an accomplishment that has undoubtedly been a cause for celebration for the country.

But lately, the postcard-worthy beaches have been lined with a foul smelling brown algae, better known as sargassum. In 2018, Mexico experienced extremely high quantities of sargassum on its beaches and experts are afraid that 2022 could be worse than the notorious 2018 bloom.

“We can say the current situation is alarming,” Navy Secretary José Ojeda told ABC News. Ojeda has been involved in the so-far-futile effort of removing the algae before it hits the beaches.

When sargassum reaches the shore, it will begin to decompose, releasing hydrogen sulfide gas that smells like rotten eggs. Additionally, sargassum can have a negative impact on local marine ecosystems. According to the Sargasse Project, when sargassum accumulates, it can result in the death of certain species and destroy coral reefs. At extremely high levels, it can attack metal, damaging vehicles and even computers.

Currently, the Navy has 11 boats working to collect the seaweed before it hits the beach but those efforts have yet to be highly successful. According to ABC News, the Navy collected four percent of sargassum at sea in 2020, three percent in 2021, and just one percent in 2022 thus far.

In addition to the smell and negative effects on the environment, sargassum is an unwanted eye sore to both tourists and locals. Hotels and local authorities are using bulldozers and backhoes to try and remove the extremely large quantities of sargassum.

“The heavy machinery, when it picks [sargassum] up, takes a large amount of sand with it,” contributing to beach erosion, Rodriguez Martinez told ABC News. Martinez works as a biologist in Puerto Morelos, studying reefs and coastal ecosystems for Mexico’s National Autonomous University. “There is so much sargassum that you can’t use small-scale equipment anymore, you have to use the heavy stuff, and when the excavators come in, they remove more sand.”

Not all of the beaches have been hit but those that have, have been hit hard. The country worries that the influx of sargassum will impact the recently recovered tourism numbers.

“[It] has definitely affected us,” Sergio León, the former head of the state’s employers’ federation, told ABC News. “It has affected our image on the domestic and international level. Obviously, not just visually, but in terms of environmental damage and pain.”

The Navy is at work, attempting to collect the sargassum before it hits the beaches. But even if the algae is successfully collected, experts are still at a loss of the best way to dispose of it. It’s often put into limestone quarries or into woodlands or mangrove swamps — both of which have negative impacts as well.

With no set solutions in place and more sargassum on its way, Mexico may be facing a challenging 2022. If you have plans to visit Mexico Caribbean beaches this year, you may want to bring a good set of nose plugs.