Mt. Everest Base Camp to Be Relocated as Khumbu Glacier Melts Away 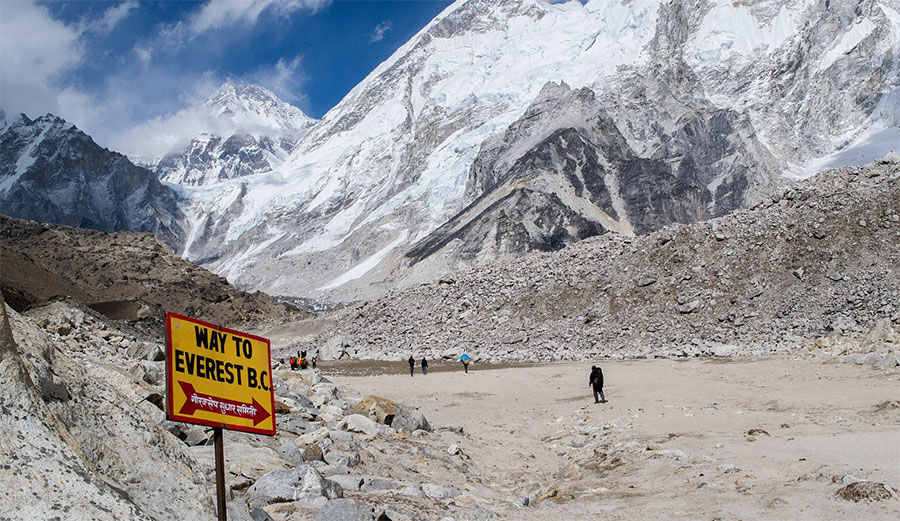 Mt. Everest’s base camp is set to be relocated to a safer area. Photo: Wikimedia Commons

Nepal is getting ready to move the Mt. Everest base camp because the Khumbu Glacier, which the base camp sits at the foot of, is melting and human activities are exacerbating the situation. The current camp is at an altitude of nearly 17,600 feet. The new one will reportedly be located some 1,300 feet lower, in an area where there isn’t any year-round ice.

“We are now preparing for the relocation and we will soon begin consultation with all stakeholders,” Taranath Adhikari, director general of Nepal’s tourism department, told the BBC. “It is basically about adapting to the changes we are seeing at the base camp and it has become essential for the sustainability of the mountaineering business itself.”

Meltwater is destabilizing the glacier, and climbers have been reporting that large crevasses are opening up at the camp overnight. The Khumbu glacier is just one of many in the Himalayas that’s melting much faster than usual. Leeds University researchers found that a portion of the glacier near the camp was thinning at a pretty staggering rate of just over three feet per year. When that happens, a bunch of things get shaken loose. Ice cliffs begin to fall apart, which further destabilizes the glacier.

“When ice cliffs melt like that,” Scott Watson, one of the Leeds University researchers, explained, “the debris of boulder and rocks that are on the top of the ice cliffs move and fall and then the melting also creates water bodies, so we see increased rock falls and movement of meltwater on the surface of the glaciers that can be hazardous.”

Overall, the Khumbu glacier is losing around 9.5 million cubic meters of water every year. Nepalese officials say that a stream that runs through the middle of the existing base camp is expanding rapidly. A lake reportedly appeared near the edge of the camp sometime in 2021, as well as those previously mentioned overnight crevasses.

“We surprisingly see crevasses appearing overnight at places where we sleep,” said Col. Kishor Adhikari of the Nepali army. Adhikari was recently at base camp. “In the morning, many of us have this chilling experience that we could have fallen into them in the night. Cracks on the ground develop so often, it is quite risky.”

It’s not just the changing climate that’s making the base camp a dangerous place, though — it’s the number of people using it. Khimlal Gautam, who was part of the committee recommending that the camp be moved, said that every day 4,000 liters of urine is casually sprinkled around the camp. That, along with kerosene and gas used for cooking and warming, is also poking holes in the glacier’s structural integrity.

As of now, though, the base camp isn’t on the verge of being totally unusable. Officials say they’ll likely use it for the next three years, although they’re aiming for a 2024 relocation.

“We have assessed the technical and environmental aspects of the base camp, but before we relocate it we will have to discuss this with local communities, considering other aspects like their culture,” said Mr Adhikari. “We will do it only after discussing with all quarters.”