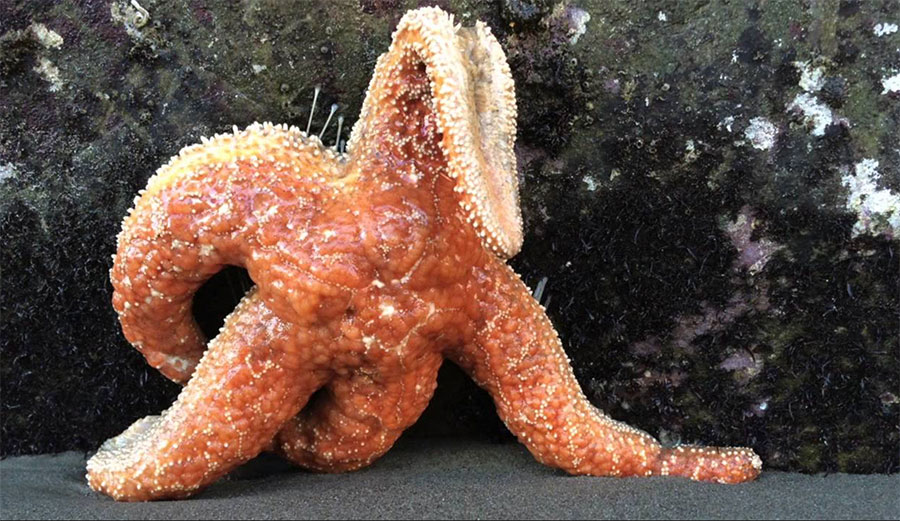 Way back in 2013, when Syria was using sarin gas, massive shit-bombs were going off at Waco fertilizer plants, and Miley Cyrus was just learning to twerk, researchers found something very, very troubling. Of course, since poison gas, shit-bombs, and butt-wiggling are much more likely to move the news needle, you probably didn’t hear about it.

Millions of sea stars along the Pacific coastline were found to be dying from something strange. From Mexico up to Alaska, sea stars were struck down by “sea star wasting disease,” and no one had any idea why it was happening. The disease causes the animals to develop white lesions that quickly spread, eating away at the sea star’s flesh. Eventually, their whole body disintegrates, and all that’s left is a pile of white goo. “They actually start to shed their legs and the legs crawl away,” explained scientific diver Doug Biffard to Chek News. “It’s like the zombie apocalypse.”

According to Ben Miner, an Associate Professor at Western Washington University, “estimates are in the ten to hundreds of millions of sea stars that have died in the last couple of years. It’s one of the largest mortality events that we’ve ever observed in the ocean.”

When it was first discovered, the disease was already spread out from Laguna Beach in Orange County, CA, up to Anchorage, AK. Since the Fukushima Daiichi nuclear disaster had occurred just a few months prior, there was understandably some concern. Those studying the phenomenon, however, were quick to dismiss it. “There has been substantial speculation in the media that the disease could be a result of increased radiation from the nuclear power plant disaster in Fukushima, Japan,” they wrote in early January of 2014. “We have no evidence to suggest that radiation is a likely culprit.” So what’s causing the wasting disease? Well, five years later, it’s still just as much of a mystery as it ever was.

One theory, posed in February of 2016, was that the gradually rising water temperatures played a role in the mysterious disease. “A scientific paper entitled Ochre star mortality during the 2014 wasting disease epizootic: role of population size structure and temperature was published by Eisenlord, et al,” wrote the University of Santa Cruz. “Their study reported that temperature plays a role in the prevalence of Sea Star Wasting Syndrome (SSWS). Analyses showed that risk of disease-associated death was correlated with sea star size as well as water temperature. In adults, time between emergence of disease symptoms and death was influenced by temperature. Experiments also showed that adult mortality was higher in the warmer water treatments. Although adults showed disease symptoms more quickly than juveniles, diseased juveniles perished more quickly. This study was conducted in Washington State, where high mortality rates were experienced during 2014 in many areas, which coincided with warm temperature anomalies. While this study explained some factors that lead to SSWS, their models indicate that other unknown factors are likely playing a role as well.”

While sea stars aren’t exactly the most exciting creatures, they are extraordinarily important to a healthy ocean ecosystem. In some areas, scientists are raising the alarm, reporting up to a 95 percent decline in populations. “It may be the largest wildlife mortality event in recorded history” explained Jackie Hildering of the Marine Education and Research Society to Chek News. “It’s of terrible importance in realizing that they are top-level predators. Our oceans are complex and there is something to be learned here that has relevance to our day to day lives.”

Hildering isn’t the only one saying the scale of deaths is unprecedented. “This is, if not the, certainly one of the biggest wildlife die-offs that have ever been recorded, and we’re not just talking marine die-offs,” said Dr. Martin Haulena, the veterinarian for the Vancouver Aquarium, to CBC last year.

Of course, any die-off event this big is of concern, but when it comes to the humble sea star, it’s even more concerning. Many sea stars are what’s known as “keystone species” which, in very simple terms, play a vital role in keeping populations of everything from urchins to mussels in check. “By having the sea stars around you’re keeping the mussels in check,” explained Chris Harley, a marine ecologist at the University of B.C. “That allows a lot of other plants and animals that would otherwise get covered and smothered by mussels to survive. When a single species gets wiped out or experiences a drastic change in population, that has ramifications up and down the food chain.”