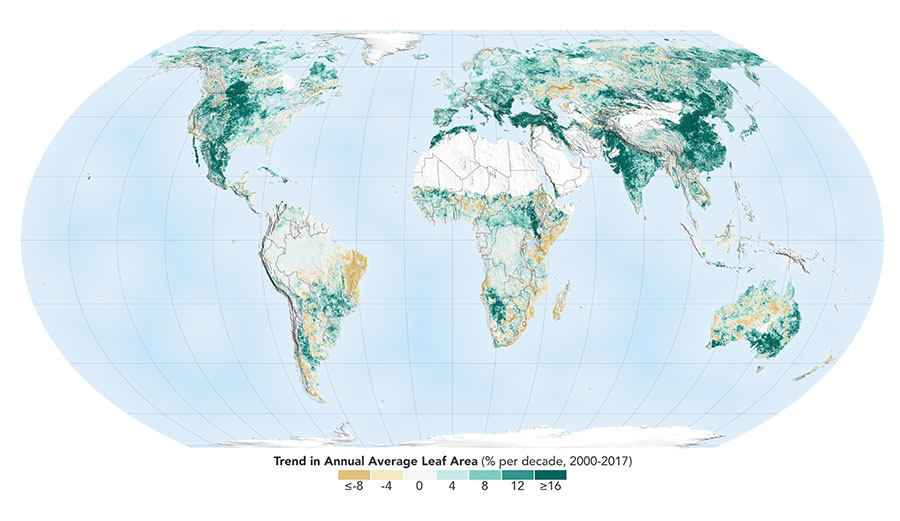 The Earth is a lot greener now than it was 20 years ago, according to satellite data from NASA. Image: NASA

Twenty years ago, the world was literally a less colorful place. Data from NASA satellites shows that over the last two decades, the surface of the earth has become significantly greener.

Way back in the 1990s, when pants were big, shirts were mesh, and the Spice Girls ruled the world, Ranga Myneni, a Professor in the Department of Earth and Environment at Boston University, noticed something odd: despite reports from the 1970s and 1980s that places like India and China were losing vegetation at an alarming rate, it appeared—from space, at least—that the foliage on our floating blue marble was making a comeback. It was around that time that Myneni decided to keep a closer eye on things to try and figure out why the so-called “greening phenomenon” was occurring.

Over the next 20-or-so years, Myneni and his colleagues routinely took notes on what was going on and released reports on it. Recently, however, they dropped a report that found something surprising. According to the numbers, China and India, two of the countries with the world’s biggest populations, are responsible for the brunt of the greening.

“China and India account for one-third of the greening, but contain only nine percent of the planet’s land area covered in vegetation,” said Chi Chen of the Department of Earth and Environment at Boston University and lead author of the study. “A surprising finding, considering the general notion of land degradation in populous countries from overexploitation.”

The researchers used data from a NASA instrument orbiting the Earth called a Moderate Resolution Imaging Spectroradiometer (which everyone calls MODIS because typing Moderate Resolution Imaging Spectroradiometer more than once is super annoying). The MODIS has a high-resolution data record that covers the last 20 years. NASA described it, in a vaguely braggy way, as such: “its high-resolution data provides very accurate information, helping researchers work out details of what’s happening with Earth’s vegetation, down to the level of 500 meters, or about 1,600 feet, on the ground. An advantage of the MODIS satellite sensor is the intensive coverage it provides, both in space and time: MODIS has captured as many as four shots of every place on Earth, every day for the last 20 years.”

According to a report the team released in 2016, the reason for all this greening is because of good ol’ human beings. “From a quarter to half of Earth’s vegetated lands has shown significant greening over the last 35 years largely due to rising levels of atmospheric carbon dioxide,” it reads.

If you will go back quickly to your time in high school science class, you’ll remember that green leaves the energy the sun throws at them to combine carbon dioxide from the air with water and nutrients they suck up through from the ground. That process is called photosynthesis and numerous studies have shown that increased concentrations of carbon dioxide increase photosynthesis, which in turn puts plant growth into overdrive.

That’s not the only way, though—as our planet warms and storms are getting, in the words of the orange man in the high(est) chair, “tremendously big and tremendously wet,” plants are thriving.

“Taken all together,” Abby Tabor of NASA’s Ames Research Center explains, “the greening of the planet over the last two decades represents an increase in leaf area on plants and trees equivalent to the area covered by all the Amazon rain forests. There are now more than two million square miles of extra green leaf area per year, compared to the early 2000s – a five percent increase.”

Now, bear in mind that back in the 1990s when researchers first noticed the greening phenomenon, they didn’t exactly understand why it was happening. “When the greening of the Earth was first observed,” said Rama Nemani, a research scientist at NASA’s Ames Research Center, “we thought it was due to a warmer, wetter climate and fertilization from the added carbon dioxide in the atmosphere, leading to more leaf growth in northern forests, for instance.”

And while they were right about that, the MODIS data proves that we’re not just helping it along by warming the planet way too quickly—we’re actually physically planting more stuff. “Now, with the MODIS data that lets us understand the phenomenon at really small scales, we see that humans are also contributing,” Nemani continued.

Ambitious tree-planting programs in China and India, along with booming agriculture, has ramped up the green space considerably. China’s forest conservation and expansion programs make up for 42 percent of the greening, while cultivation of food crops makes up for 32 percent in China and a staggering 82 percent in India.

“Land area used to grow crops is comparable in China and India – more than 770,000 square miles – and has not changed much since the early 2000s,” Abby Tabor explained. “Yet these regions have greatly increased both their annual total green leaf area and their food production. This was achieved through multiple cropping practices, where a field is replanted to produce another harvest several times a year. Production of grains, vegetables, fruits and more have increased by about 35-40 percent since 2000 to feed their large populations.”

Nemani is pretty excited about the findings, and not just because greener is better. He sees it as a positive indicator of overall human nature. “Once people realize there’s a problem, they tend to fix it,” he said. “In the 1970s and 1980s in India and China, the situation around vegetation loss wasn’t good; in the 1990s, people realized it; and today things have improved. Humans are incredibly resilient.”