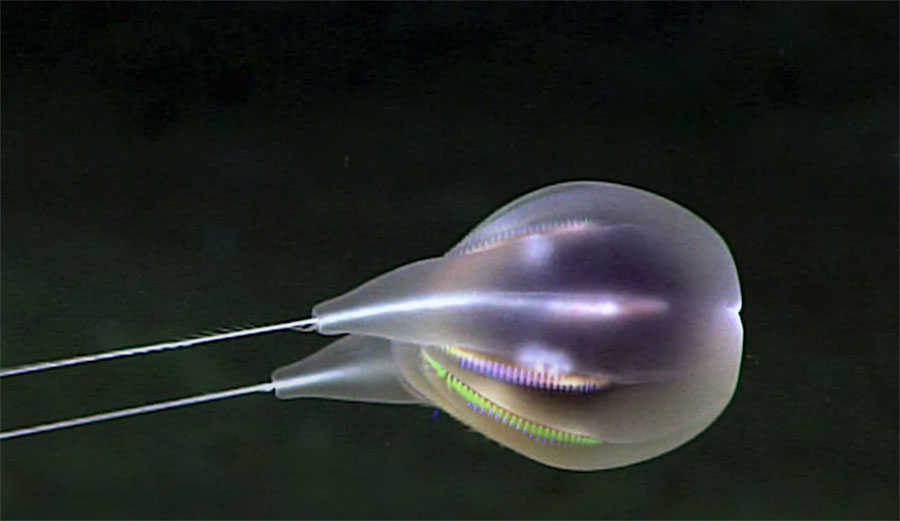 Duobrachium sparksae was first observed in 2015 in the Arecibo Amphitheater, in an underwater trench known as the Guajataca Canyon. Image: NOAA

The deep sea is home to a lot of strange creatures, and it’s likely that there are a whole lot that we haven’t even discovered yet. They swim around down there in the freezing depths, moving about their lives hidden from humanity. But there’s one less now because scientists with the National Oceanic and Atmospheric Administration (NOAA) released the news that they’ve identified an entirely new species.

The Duobrachium sparksae is indeed a strange one. It’s a gelatinous species of ctenophore, a kind of invertebrate animal that uses cilia to swim. They range in size from just a few millimeters to over a meter in length, and they can be found all over the world. NOAA researchers were able, for the first time ever, to identify the Duobrachium sparksae from high-definition video taken by a remotely operated vehicle fittingly called the Deep Discoverer. The creature was spotted off the coast of Puerto Rico way back in 2015, but since scientists were attempting to identify an entirely new species based on just a video clip, they took their time in breaking the news.

“It’s unique because we were able to describe a new species based entirely on high-definition video,” NOAA marine biologist Allen Collins explained to Science Alert. “We don’t have the same microscopes as we would in a lab, but the video can give us enough information to understand the morphology in detail, such as the location of their reproductive parts and other aspects.”

Duobrachium sparksae was first observed in the Arecibo Amphitheater, in an underwater trench known as the Guajataca Canyon. Researchers believe that these deep parts of the ocean are likely homes for plenty of un-discovered creatures, but due to the difficultly of getting there, it’s a rare thing to encounter any of them. On average, only one new species of Ctenophore, which are carnivorous, is found each year. About 200 of them are known so far.

Despite the fact that we now know the Duobrachium sparksae exists, it’s unlikely that humans will lay eyes on a physical specimen at any point in the near future. Deep sea gelatinous animals, as one might expect, don’t fare well when brought to the surface. “Even if we had the equipment,” Collins continued, “there would have been very little time to process the animal because gelatinous animals don’t preserve very well.”