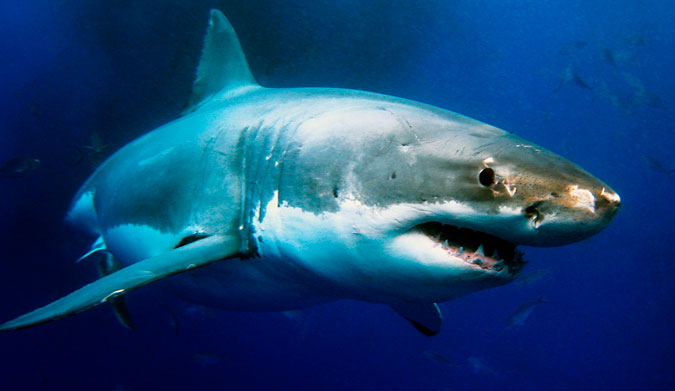 Turns out their not as mindless as previously thought. Photo: Shutterstock

When one thinks of great white sharks, it’s probably not uncommon to think of them as mindless killing machines.  New research on their hunting habits, though, shows that couldn’t be farther from the truth.

According to a four-year-long study in Gansbaai, South Africa (a region notoriously haunted by great whites), the way the apex predators find their prey is much, much more than simply sighting and biting. The study found that hunting in great whites varies greatly between male and females, and that most sharks have their own individual hunting strategies.

The study, which was published in the British journal Functional Ecology, tracked fourteen sharks between 2010 and 2014. Scientists tagged the sharks, then watched how the hunted for the next four years. “We tracked 14 individuals, all sizes and sexes, some for up to 80 hours at a time,” said Alison Towner, a marine biologist who is working towards her PhD at Rhodes University.

Towner’s research showed that the larger the shark, the more precise and refined the hunting pattern–meaning, of course, that as sharks grow, they learn from their mistakes, and are able to apply that knowledge on future hunts.

“One day,” Towner recounted, “my volunteers and I were tracking a large male in Shark Alley, an animal we know has been returning to the island for more than 12 years. For the first eight hours he patrolled back and forth, seemingly uninterested in prey. Then, to our surprise, he rushed directly up to the rocks and grabbed a seal as it was half out of the water on the rocks and devoured it. Another younger white shark we tracked west of the island tried predation on a seal, missed it and proceeded to chase its own tail.”

After more than 500 hours of research, the study proved that as the sharks age, not only do they learn specific hunting tactics, but site-specific tactics, as well. Scientists involved in the study also looked at sharks’ responses to chumming, a tactic widely used by shark tourism vessels. “This research showed us that when a white shark chooses to respond to the chum slick of a boat– and many don’t–it immediately goes into behavior that is energetically more costly for the animal, as it involves increased turning.”

While the study did look at how cage diving impacts normal behavior of white sharks, it is something the researches deemed important enough to warrant further examination.