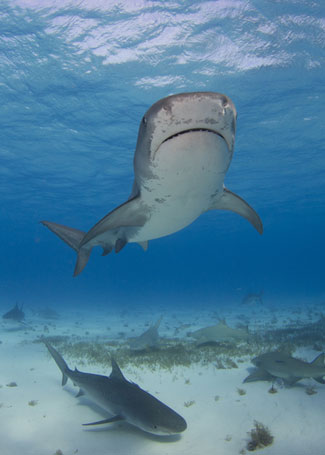 Two tiger sharks, the species that are most likely to be affected by the policy. Photo: Shutterstock

Another view of the effects of Western Australia’s shark cull policy has been released, according to the West Australian.

The Fisheries Department said recently that the policy is likely to have no effect on the environment and only  a negligible effect on most species.

In his written advice to the Government, Rick Fletcher, the department’s research director, said that the most likely target species to be caught  was the tiger shark, but not in any significant numbers.

He also predicted that fewer than ten great whites would be caught.

Fletcher also surmised that there was little risk of other sea life being killed by the drumlines. He did, however, say there was some risk of the cull affecting the population of the dusky sharks in the area. Dusky shark numbers are precariously low, although they are recovering.

Because the policy runs for a relatively short period of time (until April 30), Dr. Fletcher suspects that the number of sharks caught will have no effect on the species’ stock sizes. “…this program would not have any measurable effect on broader ecosystem functioning,” he said.