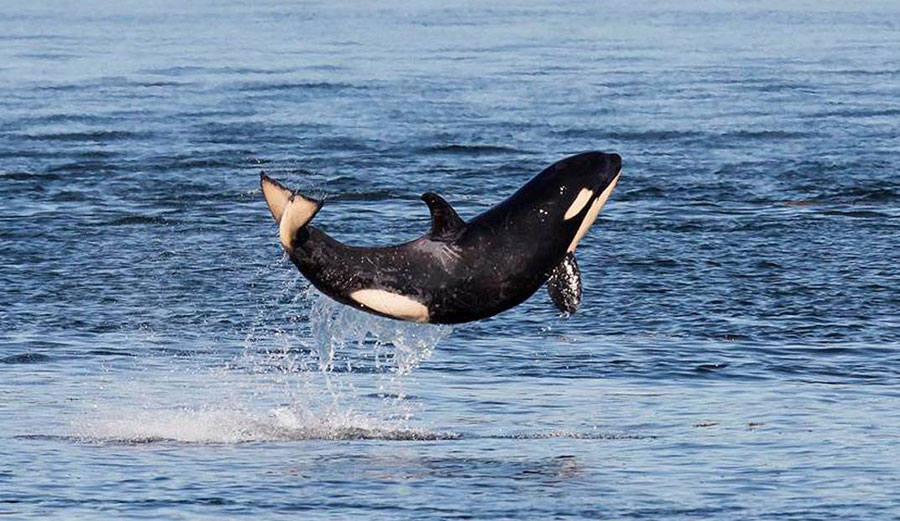 If you have had an eye on the news for the last few months, you may have read about a southern resident killer whale that carried her dead calf for 17 days. It was a heartwrenching story that highlighted the plight of her pod, but it was just one example of the many issues they face. Sadly, another whale in the pod has died.

J50, or Scarlet, as she was known to the researchers tracking her, was declared dead by the Center for Whale Research on San Juan Island in Washington state on September 13. Born in December of 2014, scars on her body led scientists to believe that she may have been pulled from her mother by other members of the pod during birth. When she was just 7 months old, she proved to be a very active young whale, breaching nearly 70 times as her family swam into the Salish Sea. From then on, Scarlet was one of the pod’s most well-known and well-documented whales.

Researchers at the Center were keeping a close watch on Scarlet after overhead photos taken back in August showed she had lost some 20 percent of her body weight. “We’ve never seen a whale recover from that sort of emaciation,” Ken Balcomb, head of the Center for Whale Research told the CBC.

Since the pod mainly calls the Pacific between Washington and British Columbia home, crews from both Canada and the United States leaped into action to try and save the whale. With only 74 in total, the southern resident killer whale population is absurdly small. In a last-ditch attempt to save her life, crews attempted to shoot the whale with antibiotics, but unfortunately, J50 succumbed to her illness.

“We know we’re not going to get a carcass, because she was so thin her body sank to the bottom for sure. We’re calling her dead as of five p.m. this [Thursday] evening,” Balcomb said. “Our boat is returning with no evidence that she’s alive anywhere in the population.”

Balcomb believes the whale deaths are a symptom of a much larger problem, and it’s one that’s been going on for a long time. Salmon in the area have been struggling for years due to human involvement that blocks spawning routes, and it’s taking a toll on the killer whales. “The cause is lack of sufficient food resources in their foraging area,” Balcomb said. “There’s not enough food, and that’s due to environmental reasons.”

Hatcheries and over-fishing are a big part of the problem. “The hatcheries are not working,” Balcomb explained. “You’re genetically homogenizing the populations and they’re smaller and less fit and more expensive to produce.”

Over the last decade, 42 whales in the population have died, while only three have been born. “The loss of one whale is tragic, but the loss of reproduction in the entire population is catastrophic,” Balcomb said. “We are witnessing a slow-motion extinction here.”