Report: The Pandemic Has Created 26,000 Tons of PPE Ocean Waste 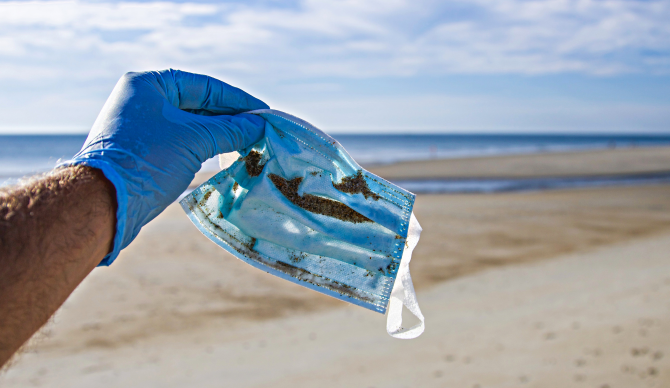 The early days of the pandemic were wild, to say the least. Scary at moments, frustrating, confusing. Many of us developed a gag reflex to the words “unprecedented times.”

If there was a silver lining at the time it was early reports of a positive impact on the planet. Within days of the World Health Organization declaring a global pandemic, pollution levels plummeted as the world was forced to a grinding halt. That trend continued throughout 2020 with global carbon emissions falling by 2.3 billion tons — a positive swing considering emissions have risen every other year for decades.

But like an addict replacing one crippling vice with another, a new report from researchers in the U.S. and China shows that the pandemic cranked the volume up on another form of pollution altogether: single-use plastic. More than eight million tons of new pandemic-associated waste has been created, and specifically, about 26,000 tons of that have already ended up in the ocean.

If packaging from shipping and delivery services or face masks are the first things that come to mind when you think of “pandemic associated,” you’re probably not alone. But the report surprisingly found that hospitals have actually been the biggest culprit. Medical waste (which includes masks, gloves, face shields, and testing kits, etc.) “dwarfs” the pollution from things like everyday masks used by regular citizens, researchers said.

“It is speculated that the pandemic will not be completely controlled in a couple of years, and many of the containing policies will continue to be implemented. By the end of 2021, it is conservatively estimated that the number of confirmed cases will reach 280 million” they wrote. “The generated pandemic-associated MMPW (or mismanaged plastic waste) will reach a total of 11 million tons, resulting in a global riverine discharge of 34,000 tons to the ocean. The MMPW generation and discharge are expected to be more skewed toward Asia due to record-breaking confirmed cases in India.”