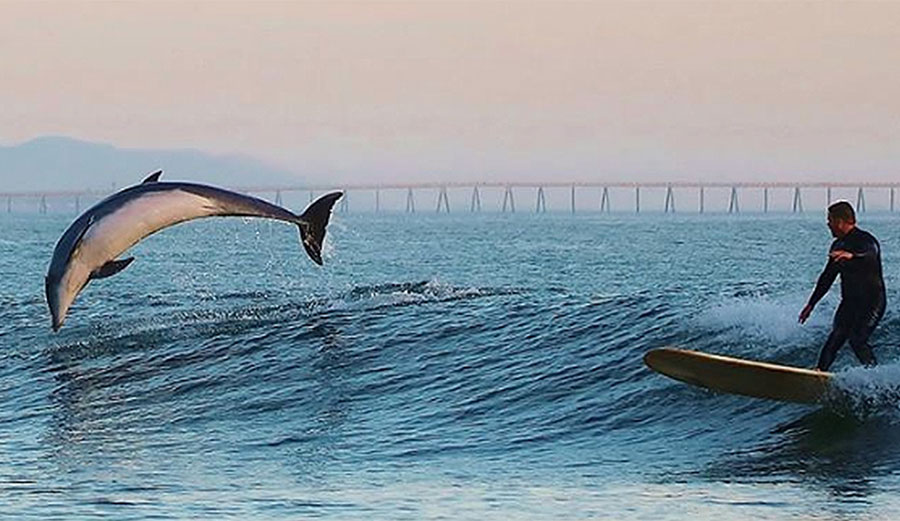 Researchers found that some 70 percent of bottlenose dolphins in Sarasota Bay had phthalate metabolites in their urine. Photo: Duncan McKenzie

Researchers studying the amount and effect of a chemical compound called phthalates in Florida found something that both depressed and surprised them: 70 percent of bottlenose dolphins in the area had them in their urine.  This is the first time phthalates have been found in the urine of a wild marine mammal, and it’s a bad sign. Dolphins, in many respects, are thought of as a kind of environmental coal mine canary. “Because dolphins are sensitive gauges of their surroundings,” the authors of the study wrote, “detection of phthalate exposure in these dolphins suggests some level of environmental contamination.”

Yesterday afternoon at my partner’s house on Vancouver Island, I pulled the garbage bag from the garbage can. There was a hole in the bottom of it, and the can was full of a rancid sludge made of coffee grounds, old salad dressing, and whatever else that garbage sludge is made of. Gagging, I poured the sludge into the toilet, then stuck the can in the bathtub, turned on the faucet, and sloshed some PineSol into it. After, I dumped it all down the drain without really thinking too much about it. At my house in California, my grey water goes straight into my garden. I would never, ever pour PineSol down the drain. I am obscenely careful about what goes down my drains because I’ll be eating the tomatoes that that grey water watered. But ultimately, it’s all pretty much the same thing—all those chemicals we produce in our strange effort to make things sparkling clean, a pretty color, or virtually indestructible are going somewhere, and that somewhere has animals living in it. Animals that are part of the ecosystem we rely on for survival, like the tomatoes in my garden. I’m telling you this because it’s just one example of the kind of things we do every day without really thinking about that trash the environment. That disinfectant you use to clean your sink? That harsh chemical you use to clean your toilet? Your nail polish, shampoo, soap, and perfume? For the most part, they all have phthalates in them. In fact, despite the fact that we know they are terrible for us, the vast majority of things we produce contains them because, in short, they make things last longer—and if there’s one thing we humans like, it’s something that will last forever. Look upon my works, ye Mighty, and despair!

So what do these phthalate metabolites do to us? Since they can cross the placenta and have been measured in amniotic fluid in human studies, they have been linked to many hormonal and reproductive issues. And while the exact dangers aren’t clear, it seems obvious that they are present. “In the Western world, male reproductive health seems to have deteriorated over the past decades, as reflected by increased testicular cancer rates, high frequency of poor semen quality and male infertility, and increasing rates of congenital malformations of male reproductive organs,” wrote the authors of a study entitled Correlations Between Phthalate Metabolites in Urine, Serum, and Seminal Plasma. “It has been suggested that exposure to environmental chemicals with endocrine disrupting activity during early fetal development may have adverse effects on male reproductive health later in life and that these effects may contribute to the observed trends in male reproductive health. Phthalates, a group of chemicals of widespread use to which we are exposed through normal daily life, are suspected to be endocrine disruptors.” In short, phthalate metabolites are suspected of being terrible little things that either result in fewer babies or results in deformed ones, among a host of other suspicions. And while we don’t know what they do to dolphins, like I said, they’re an indicator of just how many phthalate metabolites are floating around in our environment.

The study, which would be a strange one to conduct, looked at the urine of 17 dolphins in Sarasota Bay between 2016 and 2017. Researchers found phthalate metabolites in 12 of the 17.  “We are looking for metabolites. These are indicators that the dolphins have been exposed somewhere in their environment and that the body has started to process them,” Leslie Hart, a professor at the College of Charleston and lead author of the study, said in a statement. “These chemicals can enter marine waters from urban runoff and agricultural or industrial emissions, but we also know that there is a lot of plastic pollution in the environment.”

All this is to say something that you already know: we dump way too much shit into our planet. It is nearly impossible to avoid it—our entire society is built around ease and comfort. Unless you’ve figured out a way to be a hermit living entirely off the land, you are both a part of the problem and a victim of it. The most depressing part of the whole situation is that there’s not much we can do about. Short of wide-sweeping regulations banning nearly everything manufactured, these problems aren’t likely to entirely disappear—but maybe, just maybe, we can start thinking a little more about what we’re pouring down our drains. After all, it’s going into our bodies and into the bodies of countless creatures that have no say in the matter.