Scientists Created a Tiny Robot Fish That Can Collect Microplastics 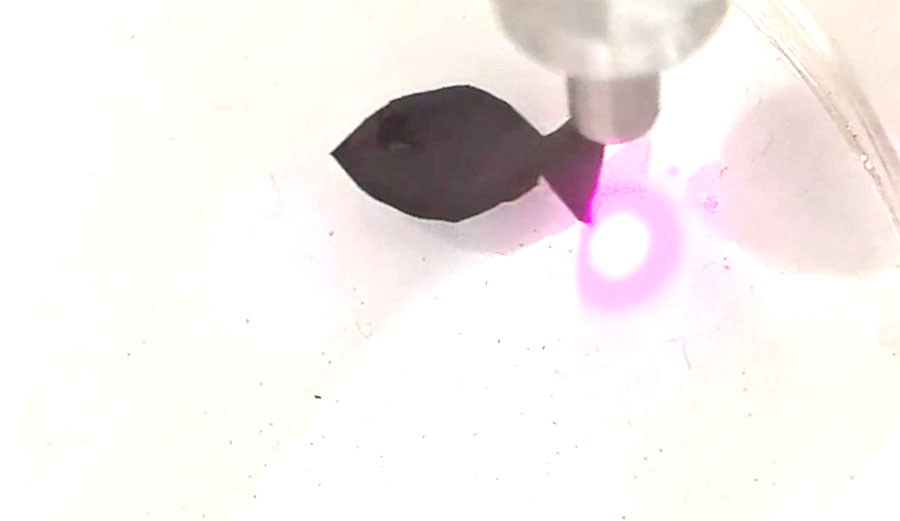 The tiny robot fish is just proof of concept for now, but it bodes well for the future. Image: Nanoletters

Microplastics, as you likely have heard by now, are a scourge. They’re in our lakes, rivers, and oceans. In our dirt, clothes, shampoo, and even in our blood. But scientists have designed a tiny little robot fish that could — could — make a difference.

Microplastics are exactly what they sound like: micro-sized bits of plastic that have broken off of larger pieces over time. Since plastic is so ubiquitous in our day-to-day life, microplastics have become a real issue. They’ve been called “one of the 21st century’s biggest environmental problems,” and until now, they’ve proven to be almost impossible to get rid of. Until now… hopefully.

The robot fish, which is 13 millimeters long, has a laser light system in its tail. It swims around at roughly the same speed as plankton drifts, about 30 mm a second. It’s made from a material a team of researchers modeled after nacre, the interior lining of a mother-of-pearl shell. They layered a pile of microscopic sheets of molecules on top of one another to create it.

The material makes the little robot flexible and stretchy, but also incredibly strong, at least for how big it is. And here’s the crazy part: it can adsorb free-floating microplastics. Microplastics, which inherently are full of dyes and various heavy metals, are attracted to the stuff the robot-fish is made of. They cling to its surface, similar to how static makes clothes stick together.

“It is of great significance to develop a robot to accurately collect and sample detrimental microplastic pollutants from the aquatic environment,” said Yuyan Wang, a researcher at the Polymer Research Institute of Sichuan University. To the best of our knowledge, this is the first example of such soft robots. After the robot collects the microplastics in the water, the researchers can further analyze the composition and physiological toxicity of the microplastics.”

Even more incredibly, the material the fish is made of can heal itself if it gets cut. “The robot fish can heal itself to 89 percent of its ability and continue adsorbing even in the case it experiences some damage or cutting – which could happen often if it goes hunting for pollutants in rough waters,” explained Sofia Quaglia, a writer for The Guardian.

Wang, however, was quick to say that the robo-fish isn’t quite ready for a wider release just yet. It is, though, proof of concept. Right now, the fish only works on the surface of the water, and microplastics have been found throughout the water column. Her team is continuing work on it with the intention of making one that can swim and collect plastics deeper under the surface.