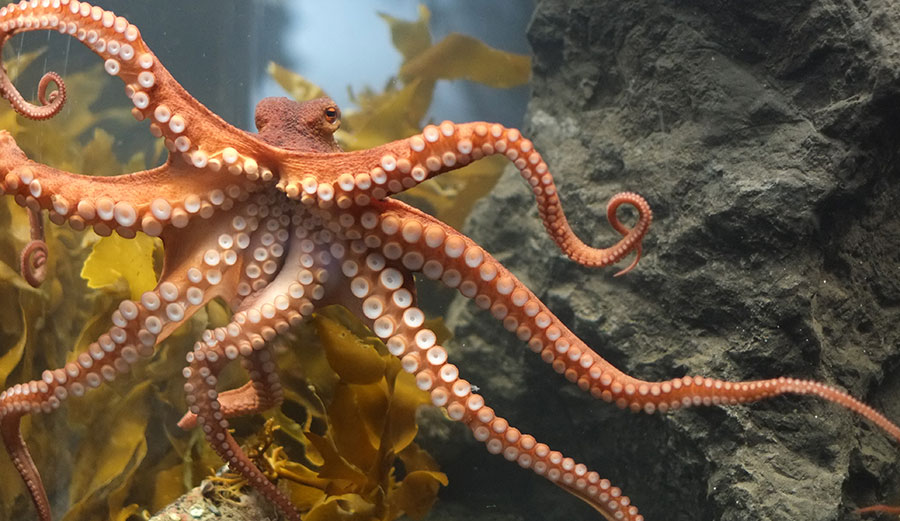 I had a friend growing up who had a dog and an older brother. The dog was named Lucy, and she was a very fat, very lazy, very nice old chocolate lab. Despite the fact that her mouth smelled like the rotting butt of a dead goat, everyone loved her very much. My friend’s older brother was one of those people who stayed in the basement with playing video games and smoking as much pot as he could. Once, I remember him holding Lucy’s face and blowing a lungful of pot smoke at her. It turned out that this was not an uncommon thing for him to do, and Lucy was basically stoned and happy all the time. Still, I thought it was mean. Dogs can’t tell you if they want to be stoned. And while Lucy definitely seemed ok with lying around on the couch getting fat and sneaking Cheetos out of a bag, I still think for the most part people shouldn’t give their pets drugs. Unless, of course, you own an octopus and have some molly laying around the house. Which is what happened. Actually. In the name of science, researchers gave an octopus MDMA. What a wonderful world we’re living in where someone proposed that study and actually had the funding approved!

So why would anyone want to see what happens to an octopus on ecstasy? Well, why wouldn’t they want to see what happens? Octopuses (no, octopi is not the plural of octopus) are generally antisocial, preferring to hide out under rocks and fart ink on anyone who might be disturbing them. They are also extraordinarily intelligent, and about as far away from humans as an animal can possibly get. “[A] major argument for studying octopuses is exactly that they are so evolutionarily far away from us,” lead researcher Gul Dolen told IFLScience. “Thus, it’s a little bit like studying alien intelligence, it can potentially tell us a lot about the ‘rules’ for building a nervous system that supports complex cognitive behaviors, without getting bogged down in the incidental (necessary but contingent) organization of brains.”

According to the study, MDMA works pretty much the same on an octopus as it does on a human. “When given the party drug,” wrote Madison Depevich, “a relatively antisocial, solitary species of octopus became more social, engaged, and generally interested in its surroundings.”

In the study, the researchers (who may or may not have been rolling at the time) put an octopus on MDMA in a tank with three different areas. One had an object, the second was just a boring old empty space, and the third had another octopus who was stuck in a plastic cage. And guess where the MDMA octopus hung out? You’re right. It hung out with the caged up octopus, engaging in “extensive ventral surface contact,” which is just science talk for heavy petting.

So although it may be one of those studies that makes you wonder who’s paying for this stuff (god, is it the taxpayers?), at least we know that if you ever feel like taking a bath with an octopus while the both of you take MDMA, you’re in for a pretty good time.